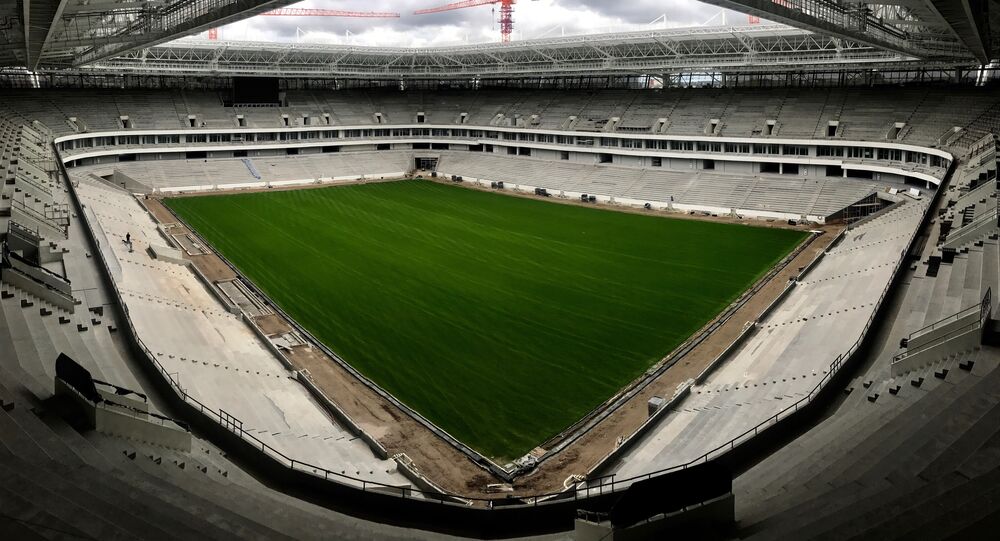 KALININGRAD, Sputnik - Holding a blue scarf of the local football team FC Baltika, Dmitry Pitshtel chanted "Baltika will be champions" while posing for a picture with a group of friends who came to watch the first game at the newly completed Stadium Kaliningrad, which will host three games during the upcoming 2018 World Cup in Russia.

"It is good for our city [to host the World Cup], as more people from other countries will come and visit the nice seaside [close to the city] and our great new stadium in the city. It will be great!" Pitshtel told Sputnik.

Growing up in Kaliningrad, Pitshtel has always been a loyal supporter of the local football team FC Baltika.
"Our team was a great team in the 1990s. We were the best team at the time. We want our team to advance to the Premier League in Russia. Baltika will be champions!" he said.

Kaliningrad's home team FC Baltika and FC Krylia Sovetov, which are both in the Russian National Football League's second tier, played in the first game at Stadium Kaliningrad on Wednesday, with Baltika winning 1:0 with a penalty shot.

The 31-year-old local resident works as a sales manager for a local distribution and logistics company, which also took part in the construction of the new football stadium in Kaliningrad.

"We also built this stadium," Pitshtel said while pointing at the new stadium proudly.

Before the first game at the new Stadium Kaliningrad kicked off, Governor of Kaliningrad Region Anton Alikhanov shared his views on what hosting the World Cup means to the city and local residents.

"I think it is hardly possible to estimate the impact and legacy [of hosting the World Cup] for the time being. But I think it will be huge. Without the decision to host this tournament, we would not have new roads, a new airport, new runways, new bridges and new hospitals [being constructed] in the city. We would not have all of that, without the opportunity to host the tournament. There have been huge investments in the infrastructure, which helped solve a lot of problems for local residents," Alikhanov told a group of reporters before the game.

Alikhanov stressed that the World Cup could open up new opportunities for local businesses.
"You have noticed there have been 154 hectares of newly developed areas that will be used as public spaces. This is the area for investment and developing businesses. This legacy cannot be underestimated," he said.

For local football fans like Pitshtel, the World Cup games are not as accessible as the games of the local team FC Baltika.

"I tried to buy tickets for the World Cup games. But most of the tickets were sold out in the system. The tickets left are too expensive for me," he said.

At the same time, not all local fans who came to the first football game at the new stadium in Kaliningrad are interested in paying extra for the World Cup games.

"I have always followed the local team Baltika. The World Cup games do not matter to me so much, because I am a basketball fan. If some NBA teams play here, I will definitely come and watch them play," Denis Nikulshin, a 22-year-old student from the Baltic Federal University in Kaliningrad, told Sputnik.

READ MORE: Football Fans Are Recommended to Avoid Coming From EU by Land During World Cup

For the young university student who is studying to become a sports educator, hosting the World Cup is also a great opportunity to help foreign visitors understand Russia better.

"Fans from Serbia, England, and other countries that will play in the World Cup will have a chance to come here and see everything with their own eyes. I think they'll like it," Nikulshin said.

During the Kaliningrad Region's governor's meeting with the press, local reporters raised concerns over the fact that some residential buildings in the city's center were not in ideal condition, which would be a sharp contrast with the newly completed facilities for the World Cup.

The region's governor promised to continue the renovation program of the central part of the city, even after the end of the World Cup.