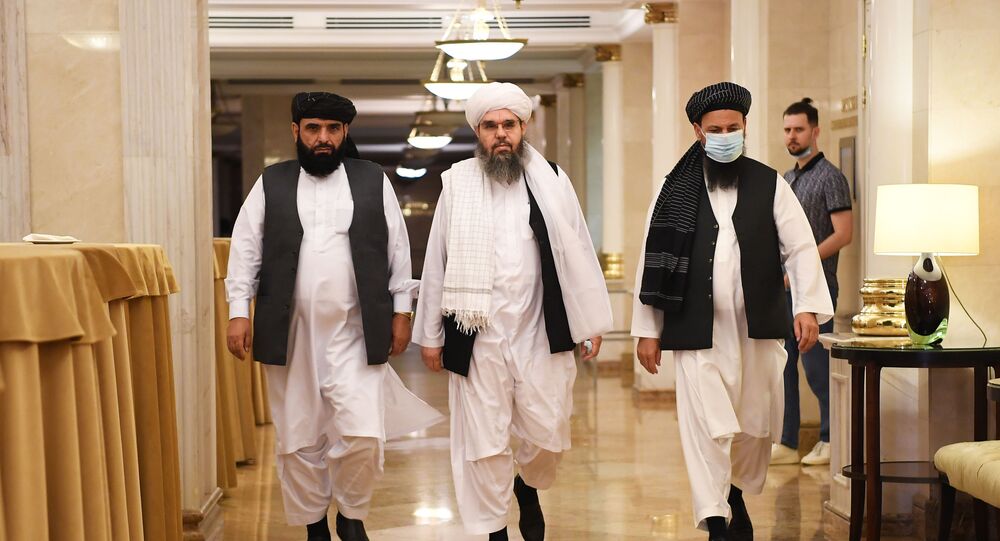 In an exclusive interview with Sputnik Afghanistan, a spokesperson of the Taliban* Political Office spoke of the Taliban’s vision for the future government of Afghanistan and what actions could be expected from their organisation.

Suhail Shaheen, a member of Negotiations Team of the Taliban* organisation and Political Office spokesman for International Media, talked about how the Taliban sees the future government of Afghanistan, when a ceasefire will be declared, when an Intra-Afghan dialogue can resume in Doha between the Taliban and the Kabul government delegation, how the Taliban would counter the cultivation and smuggling of drugs, how they will rebuild the country's economy, and how they have organised life for Afghans in the territories they have recently taken over.

Sputnik: What is the Taliban's position on Turkey's presence at Hamid Karzai International Airport to ensure its security?

Suhail Shaheen: Turkey and NATO entered Afghanistan together and should leave together in accordance with the Agreement [for Bringing Peace to Afghanistan between the Islamic Emirate of Afghanistan which is not recognised by the United States as a state and is known as the Taliban and the United States of America – ed. note Sputnik] signed in Doha on 29 February 2020. Instead of that [their continued presence], it is better to let them concentrate on the peace programme and play a positive role in the peace process.

Sputnik: The ambassador of the Islamic Republic of Afghanistan to Russia said that the Taliban are “negotiating for peace, not for peace”, accusing the Taliban of being unwilling to negotiate peace. When will peace talks start?

Suhail Shaheen: We believe that some of the views expressed have a propaganda bias instead of reflecting the real state of affairs. Negotiations are under way in Doha. There is agreement on some points, after the talks.

Sputnik: What then is the agenda for the Intra-Afghan dialogue?

Suhail Shaheen: After the start of the Intra-Afghan negotiations in Doha, both negotiating teams agreed on the procedural issues of the talks and approved them. Then, both sides proposed their agendas and agreed on the general points of the negotiations. And now we are negotiating the points on which agreement has been reached.

© AP Photo / Nazim Qasmy
Afghanistan Rejects Reports That India is Supplying Arms to Afghan Forces to Help Fight Taliban
Sputnik: What are the biggest challenges and obstacles in the Intra-Afghan negotiations?

Suhail Shaheen: The issue lies within the opposite side: on the one hand, it has not shown flexibility, and on the other, it has not fulfilled its obligations under the Doha Agreement. Inter-Afghan negotiations have started and are underway, but agreements are not being implemented, such as the release of the remaining prisoners of the Islamic Emirate of Afghanistan, the de-listing [of Taliban leaders] from the sanctions lists. The agreement clearly stated that within three months after the start of the Intra-Afghan dialogue all prisoners should be released and their names removed from the lists. For our part, we have implemented everything and remain committed to the agreement.

Sputnik: What is your plan for national reconciliation?

Suhail Shaheen: Both sides must agree on an All-Afghan Islamic government and achieve that goal through negotiations. This would be a significant and effective step towards national reconciliation.

Sputnik: The Taliban claim to have waged war against the invaders – the US and NATO forces. Foreign troops will apparently soon leave Afghanistan. With the withdrawal of the last soldier will you stop/suspend the hostilities? Will you declare a ceasefire?

Suhail Shaheen: Yes, we did fight the foreign invaders. We sat down at the negotiating table and agreed that in 14 months [by 1 May 2021 – ed. note Sputnik] they would leave Afghanistan. We also agreed that we would not attack them during the withdrawal. As for internal issues, the other side should first sit down [at the negotiating table] and we should come to a political agreement that will bring lasting peace. But they don't want a political [solution], they just want a ceasefire to stay in power. That is not a realistic approach. It will not solve the problem. They must show flexibility. There must be a new All-Afghan Islamic regime coming to power and then we will talk of a ceasefire.

© AP Photo / Allauddin Khan
Afghanistan Urges Regional Powers to Pressure Taliban to End Violence and Launch Peace Talks
Sputnik: What changes will the Taliban bring to the lives of Afghans?

Suhail Shaheen: Once an All-Afghan Islamic government is established, men, women and children will live in a free country, in peace and security. They will be rebuilding and rehabilitating the country. There will be no foreign interference. There will be positive changes in the lives of Afghans with the establishment of an Islamic-inclusive government.

Sputnik: What is the Taliban’s programme to counter drug cultivation and trafficking?

Sputnik: You said at a press conference that women can get an education from "school to PhD". What about doctoral studies, for example?

Suhail Shaheen: At the conference, we simply gave an example. If we have a centre, an institute, a university in our country with the necessary conditions [for obtaining other scientific degrees], then please, no problem.

Sputnik: How did you organise life for Afghans in the provinces that have been taken over by the Taliban in recent weeks?

Suhail Shaheen: In those districts, which make up a large part of Afghanistan, people live in peace, free to choose their jobs and occupation. There is security in those neighbourhoods, unlike areas under Kabul's control. You can't even compare those areas in terms of security.

Sputnik: How do you plan to fix the country's economy?

Suhail Shaheen: We are going to develop a short- and long-term programme to rebuild Afghanistan and its infrastructure. We will cooperate and engage with regional and global countries. At the outset, we will not be able to rely on our resources. But in the future, we will strive to be self-reliant.

Sputnik: Afghan media reports that restrictions have been imposed in Taliban-occupied areas, for instance, girls are only allowed to go to school until 6th grade. Does the Taliban leadership find this acceptable?

Suhail Shaheen: That is propaganda. We stated our policy at a press conference. That is, women can get primary to higher education. If there are no opportunities in some areas, it is a question of conditions, not our policy.