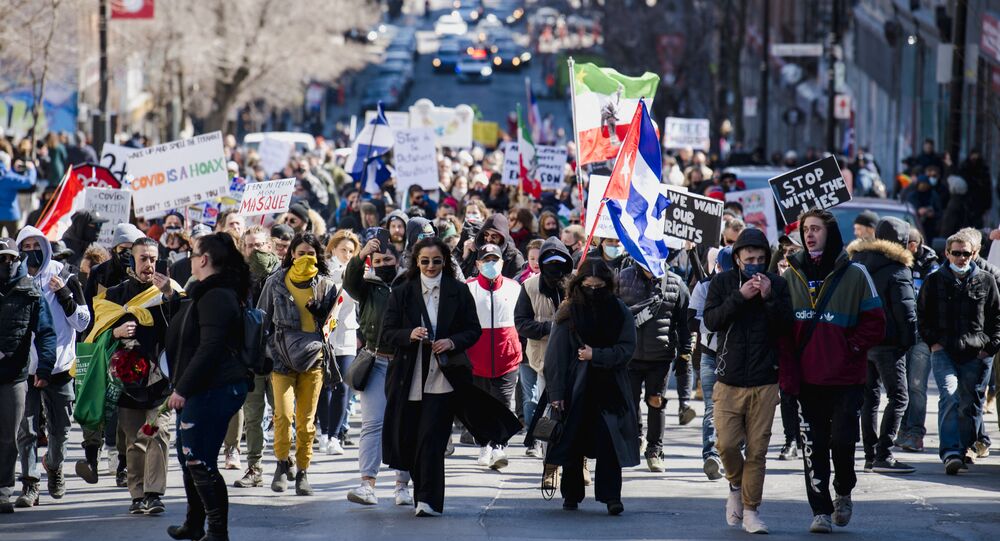 In February 2021, Canada’s government introduced mandatory quarantine hotels for people arriving into the country – however, the conditions, facilities, and management have come under fire.

Each traveller has to pay up to $2,000 for accommodation and remain in their hotel until they receive a negative PCR test result. According to Dr. David Edward-Ooi Poon, founder of a grassroots organisation “Faces of Advocacy,” quarantine hotels do not provide sufficient safety for occupants and are no better than home quarantine.

Sputnik: There’s been a lot of criticism of mandatory quarantine hotels, especially after reports of attempted rape and even outbreaks of COVID inside these government-controlled facilities. Your organisation has investigated the safety and security of these hotels. What did you find?

Dr. David Edward-Ooi Poon: So there are two main streams to look at regarding quarantine hotels. Number one is the legal avenue that we’re taking, and number two is information that we’re presenting. So, number one, with the legal avenue that we're presenting: for example, the person who was sexually assaulted in the quarantine hotel – she is one of our plaintiffs in our charter challenge. Charter challenge is saying that in our Charter of Rights and Freedoms, we have a number of rights that are being infringed upon by the existence of mandatory hotel quarantine.

So, number one would be that our mobility rights are restricted. A Canadian is allowed to leave and enter the country under the Charter of Rights and Freedoms. However,  this is an impediment to leaving and re-entering the country. In addition to that, we also have a charter that we aren’t supposed to be detained for an indefinite amount of time, so one could argue “Oh, well, definitely you have a negative test.” The problem is you don't know when your test came back negative.

​So we believe that technically this is unlawful detainment for Canadians. In addition to that, it may not stand up to the charter, given that there are alternatives because there is no government proof that home quarantine is significantly worse, or worse at all,  than hotel quarantine. The problem is the government of Canada cannot show that quarantining at home is worse and will cause the country to explode if you allow people to quarantine at home.

The second thing we did is we monitored the stories that people have. And so, for example, it could be as simple as people were packed into shuttles going to the quarantine hotel. Now, there have been three major outbreaks at Canadian quarantine hotels since we've done this review. So I believe that had the government heard our concerns, there may have been less of a spread within the hotels and all those other things, like dirty beds in hotel rooms, hotel food is coming in late, etc.

Canada's mandatory hotel quarantine is a human rights violation. Going without water and food is simply unacceptable. People are unable to book hotels yet fined because nobody is taking their call! You never know a person's situation, there are many reasons for traveling #cdnpoli

​There are apparently non-quarantined people in the same hotel as quarantined people, who could interact in the hallways, interact in the elevators, and these are the major concerns we have, because if a person was allowed to safely quarantine in their own home, they wouldn't be exposed to the problem at the mandatory hotel quarantine. So these are the two problems-legal and then everything else we’re bringing up from people going to hotels.

Sputnik: Thousands of families have been separated by the pandemic, last year and in 2021 as well. Your organisation is trying to help them re-unite. Is it even possible with all the border closures and strict lockdown rules in place? How many Canadian families were actually able to cross international boundaries and to actually re-unite during that period?

Dr. David Edward-Ooi Poon: There are many ways to answer this question. So, I'll give the numbers as best as I can explain them. When we first started our campaign, we had tens of thousands of separated families. Separated families can be for various reasons. Number one, the 14-day quarantine. Number two, the fact that the land border was locked going into the United States. Number three, flights were getting cancelled. And number four, within Canada family reunification is not considered essential.

Canada seems to have turned their backs on families with members outside of Canada. @JustinTrudeau @CanadianPM @BillBlair @marcomendicino @PattyHajdu @fordnation so much for Canadian tradition. Apparently we are only tolerated not really welcome.

​This terminology is important as we go through the numbers later, as we were able to convince the Canadian government to allow extended family members to join within Canada, so that means siblings, partners, adult children, this allowed many people to reunite. However, the exact number is difficult to say because some people are coming in under, for example, married partner exemptions, which were different than the exception that we fought for. Some people are able to reunite due to essential work and some people were always able to come into Canada but were unable to because of the 14-day quarantine. But something changed in their life, which might be a different job, they were able to come into Canada. So what I can say right now is that we've had a substantial number of people who have been able to reunite under the changes to the Canadian government policy that we've enacted. However, the long-term solutions have still been prevented because of the 14-day quarantine and now the mandatory hotel quarantine. That's why currently what we're doing is asking for the government to allow exemptions to mandatory hotel quarantine for families and also allow further mobility for those who are fully vaccinated.

Sputnik: You’ve also criticised Canadian officials, namely the minister of Foreign Affairs Marc Garneau for traveling to the G7 meeting the UK in person, while there was also an option to attend it through Zoom. Do the ministers of Justin Trudeau’s government practice what they preach in terms of COVID restrictions, or they just ignore them? Did you get an answer from the minister after you wrote to him?

Dr. David Edward-Ooi Poon:  We have not gotten a direct response, but there are two ways to approach this. Number one is we could be entirely critical and say “hypocrisy, hypocrisy” because he's a former astronaut. I say it's “astronomical hypocrisy.” I like my space puns. Soon after we released a press release, Minister Garneau’s people announced that he would choose to go into a quarantine hotel. As a government official, he is already exempt from quarantine hotels, and we believe that this was a direct response to the amount of publicity that we brought upon it.

However, we can also look at this as a heralding of a new age because the government has been exempt from quarantine since day one. However, this is the first high profile person to actually do international travel. We want to use this as a statement to Canadians and the government: “If you believe that international travel can be done safely with someone who is exempted from the hotel quarantine, then why would you not allow families to be considered exempt and essential if this conference is considered exempt and essential?” That's essentially our leverage and our position moving forward.