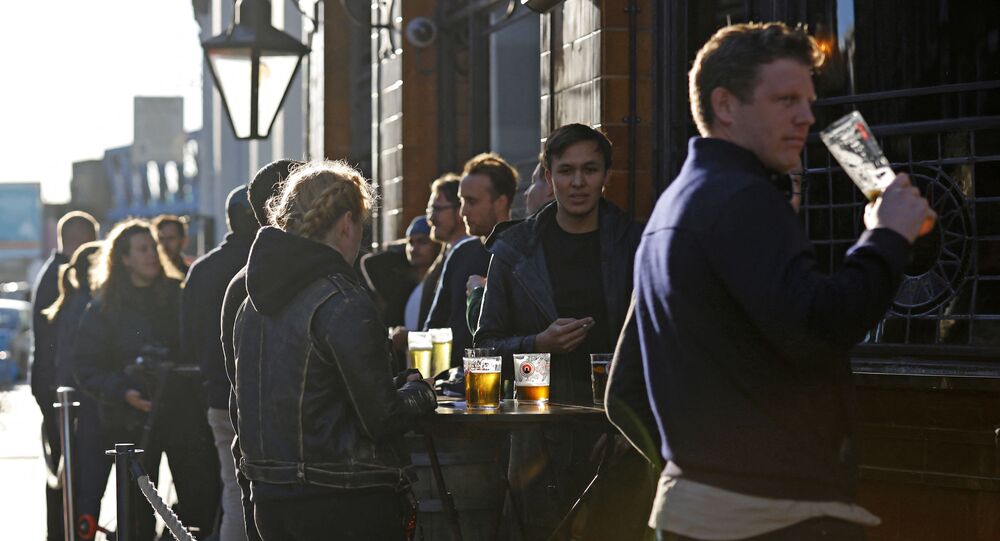 As many countries are witnessing the third wave of the COVID pandemic, some observers are certain that it’s time to rethink our approach to dealing with the virus.

According to Dutch independent journalist Max van der Werff, the rights of those who contract the virus, or those afraid of being infected, should be respected, but “the cure should not be worse than the disease.” He says it’s time to start gradually opening up the world.

Sputnik: Recently you were diagnosed with COVID-19. How is it affecting your life?

Max van der Werff: The strange thing is that about a month ago I felt very bad – so tired and feverish. I was almost sure I had food poisoning. I’ve had it before in my life, and this is how the symptoms felt. Everybody in my household had the same feeling, like feeling a little bit sick, a pain in the stomach. But after two days everybody felt okay again, but I, after one week, still felt very bad. I wasn’t walking or eating, just sitting at home, and then I got nervous. Then I took a dose of sleeping pills, I slept 24 hours because I was so exhausted, and after that I woke up and felt suddenly a lot better. Then I decided to take a PCR test. I’ve been tested negative before, a couple of times. And this time, after three weeks, when I got a positive result – let me tell you, it was a big shock for me. It was almost a week ago, so I’ve been struggling now for a month.

Sputnik: We are seeing the coronavirus affecting different nations in varying degrees. In your home country, the Netherlands, the coronavirus death rate and number of infections are much higher compared to the Philippines. Do you think that we are seeing an undistorted picture of the pandemic?

Max van der Werff: I’m very careful to make statements about things I do not really know a lot about. It seems that different countries have different ways of counting who is suffering of COVID, there are differences in the testing capacity: of course, the more people you test, the more positives you will find. What I see on the internet is that if you’re tested positive there is a 2 percent chance you will die, and a 98 percent chance that you survive. And the difference between the countries – it could have to do with the population pyramid. Here in the Philippines, where I’m now, there is overwhelming majority of young people, while in the Netherlands, and in the west you have the baby boomers – and I count as one of them, who are 50 to 80 years old. So, there will also be differences in the percentage of people who will get sick out of the entire population – that is what I assume.

Sputnik: The Philippines, like most other countries, is on lockdown. Children have been unable to go to school for a very long time. Do you think these drastic measures are needed?

Max van der Werff: Well, the lockdown, extended community quarantine in Manila, was just extended for two weeks but in a milder form, so now they call it “moderate quarantine.” But because all the traffic from north to south goes through Manila, a city with a huge population where people are clustered together, there is a very high risk of contamination. They have special regulations in that area.

In the area where I am – Subic Bay – you have to wear a mask when you’re outside. When you go into big stores you have to wear an additional facial mask. But for the rest – the restaurants are open, the bars are open, beach clubs, and fitness studios are open. Basically, everything is open. And once you go inside a bar, or a restaurant, or a fitness studio – you don’t have to wear a mask anymore. So, in the Philippines there are different rules depending on the area which you’re in. And also, the transport to the capital is very restricted. I cannot take a bus to Manila, for example. If you want to leave your province, you have to get a travel pass.

© REUTERS / ELOISA LOPEZ
Philippines Man Reportedly Dies After Doing 300 Squats as Punishment for Violating COVID Curfew
There is a discussion about wearing a seatbelt, or wearing a moto helmet when you drive or ride, and you can make the case that some idiots have to be protected against themselves. You can also say it should not be allowed for people who abuse their freedom to make other people sick and infect them. This is an argument, a line of reasoning that I’ve been reading for over a year now, since it all started. On the other hand, you can turn it around, you can say we have a society where there’s a risk that you can die in car accidents, you can get cancer, there are many things that can go wrong in your life. If you’re afraid of getting COVID, you have the right to stay home. On the other hand, I very strongly feel that where your fear starts – it’s not where the freedom of other people should end.
© AFP 2021 / ROBIN VAN LONKHUIJSEN
'Police for Freedom': Protesters March in Utrecht Province Against Tighter COVID Measures
So I would plead for respect for the people who get sick, empathy for the people who get sick, empathy for the people who are afraid of this disease – they should get psychological help, they should get extra protection. But I think now, when we understand the mortality of this disease, we understand so much more. The vaccines are available now, we’re going in a direction of herd immunity, I think we should speed up herd immunity by opening things up – maybe not drastically, not everything at a time, but I’d say within a couple of months we should be able to live our normal lives as before. That is my personal opinion, and I don’t mind if people disagree with me. I’m not a scientist, but this is my opinion as a citizen.
© REUTERS / Eloisa Lopez
A health worker participates in a simulation for COVID-19 vaccination in preparation for its arrival, at an elementary school turned vaccination command center in Pasig City, Metro Manila, Philippines, February 16, 2021

Sputnik: Being a Dutch citizen who resides in the Philippines at the moment, you probably see things from two different angles. In your opinion, what will the long-term consequences of the pandemic be globally, and how it will affect the younger generation?

Max van der Werff: To be honest, I’m not optimistic. What I see is the enormous suffering of younger people who are healthy, who have almost zero chance of dying from the disease. I think in a civilised world you protect the people who are susceptible to the virus, you protect the weak and the vulnerable, you isolate those. I think for the first time in history we are isolating the healthy part of the population. I think this has never happened before. To me it seems to be the wrong approach. I think that at my age, and with my weight – I have a body mass index of over 30, - you can say “well, you’re a fat guy, it’s your fault, if you catch the disease it’s your problem.” But you can make the argument that healthy people should not be locked up in their homes. I have children who are 10 and 30 years old – they should be able to live their lives. The younger one should go to school, the other three – they should be able to go to pop concerts, without all kinds of crazy measures. I’ve been saying it before I got COVID, and now that I’m a patient myself, I still have the same position, it didn’t change.