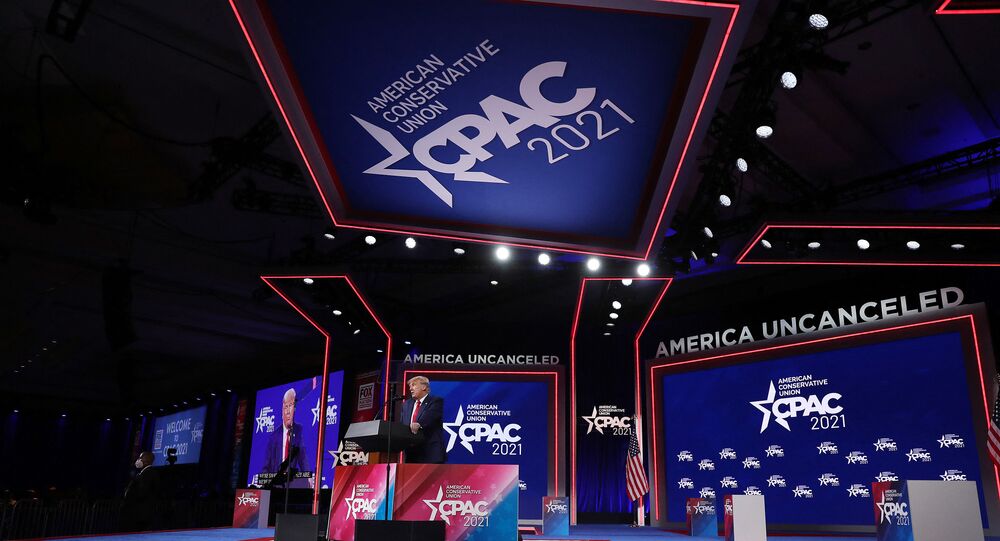 Lawyer and conservative activist Rogan O'Handley, boasting 1.8 million subscribers on Instagram, has joined Sputnik for an interview to share his thought about the stifling of conservative voices in the United States and also gave his take on the new US administration and its policies.

Mr O'Handley recounted his own experiences with social media censorship and the tight grip of the Big Tech on opinions and beliefs in media platforms.

Sputnik: You opened up about being targeted for your conservative political views during the Conservative Political Action Conference. What's it like to be a conservative in the present-day United States?

Rogan O'Handley: Well, being a conservative in America right now isn't the most popular position to take, but it's why it's one of the most important types of value systems to push forth, because right now there is a lot of leftist cancel culture permeating all over this country. And we need to re-establish the importance of  that people are imperfect, forgiveness is an option, that we don't want to delete people from their entire existence, their jobs that they've built up. I was removed from the Conservative Political Action Conference - I was asked to leave under threat of arrest, because I refused to wear my face mask while I was taking pictures with other people. I was there about 20 minutes, and they didn't like that I didn't put my mask up between pictures.

Sputnik: You've mentioned that for a long time you were unable to publicly support the GOP or former President Donald Trump, with people unfollowing you on social media for your beliefs. Currently, you boast 1.2 million followers on Instagram, have you experienced any type of censorship on social media?

Rogan O'Handley: Oh, absolutely. A lot of us have in this country - if you espouse conservative beliefs on social media, you have to be very careful about how you do it, so as to not go against their “community guidelines” on social media. But those have been really extended more into the political realm. It's not about whether you make someone else personally uncomfortable or you even say something racist, which almost all of us don't even do. But now, if you discuss things like our elections, you can be banned off platforms. I was banned off Twitter for discussing the results of the 2020 election, and I took a contrarian view to what the mainstream media pushes. And I was booted off the platform, as was President Trump, Mike Lindell, General Flynn, Project Veritas.

The list is getting longer and longer by the day, so it's very important that we protect free speech on social media. It's one of the most pivotal battles that we face.

Sputnik: And do you face the same problems on Instagram?

Rogan O'Handley: Yes, there's censorship on all the platforms. Every platform is a little bit different. I really do try to conform to their guidelines, because I'm using their platform. It's not a public utility. It's not a government service. So I do try and respect them.

The problem is how you can kind of be caught off guard by some of the guidelines. Either they change very rapidly and you didn't know about it, or they're not being enforced in the way you would have expected. Sometimes things are in the middle. They're in a grey area and they may choose to enforce it. And you might be surprised, you weren't expecting them to ding you for a violation. So, hopefully they develop more transparent appeals processes to go along with this.

Sputnik: Is there a way to fight Big Tech’s grip on society?

Rogan O'Handley: Well, it's something that we're starting to do here in America, especially at the state level. The first step is making sure people understand that this is an issue. And I think at this point, especially since President Trump was banned off of all the social media platforms, a lot of people realise that's too much power where they can literally silence the president of the United States while he's sitting in office. So, a lot of people woke up after that and I think there is a push for reform of our laws that govern these entities. And it's especially happening at the state level. Florida, Texas, and other states are pushing laws that will hopefully work to restrict some of these censorship excesses.

Sputnik: Barack Obama held his first solo press conference within 20 days of his inauguration, while Donald Trump held his 27 days after assuming the presidency. In a stark contrast, Joe Biden has gone 54 days without taking questions from reporters, becoming the first US president in at least 100 years to go that long without holding an open Q&A session with the media. Why is that?

Rogan O'Handley: Well, it's really no surprise, given how he campaigned from his basement and only gave a few pep talks while people stood in chalk circles in the grass, there are more reporters than attendees at his rallies.

So, Joe Biden is clearly experiencing some form of cognitive decline that they do want to keep under wraps.

We see proof of it all the time, whenever he is allowed to go off script. Even on script, he can barely read through this stuff coherently and succinctly. A lot of us are very worried about what they may be hiding about his medical condition. And I feel like them not holding a press conference within the typical amount of time is a further indicator that things may not be OK under the hood, so to speak.

Sputnik: President Biden, the first lady, and Vice President Kamala Harris are starting a "Help is Here" tour this week. They'll explain how they intend to achieve the goals Biden laid out in a speech to the nation last week, including making all adult Americans eligible for a vaccine by 1 May. What are the main risks Biden is facing with his ambitious timelines?

Rogan O'Handley: Well, frankly, he really doesn't have a lot of risk, because he's got a very friendly media that will protect him at pretty much every cost like they have in the last year. President Trump, he created Operation Warp Speed. He brought vaccines to fruition faster than anybody thought, and he was demonised and attacked.

Joe Biden is largely operating under the same vaccine system that was put in place by President Trump.

All he really has to do is continue what was already set up and hopefully he doesn't screw anything up and then he'll be fine. The media will protect him almost no matter what. But it does seem that the vaccine rollouts are going very well across the country. I know here in Florida, where I live, we are almost through all the 65 and older residents of the state. It will soon be making the vaccine available for everyone else in the state.

Sputnik: What's your take on President Biden's COVID-19 response compared with that of Donald Trump?

Rogan O'Handley: Well, like I said, I think it's largely a continuation of the policies that were already put in place by a very tremendous president, President Trump. Again, he's been in office for about two months now and the economy has taken a hit, gas prices are rising. But thankfully, there was something put in place by President Trump that couldn't be easily ruined or destroyed. And that was the COVID-19 vaccine national rollout, which is largely going very smoothly.

Sputnik: New York Governor Andrew Cuomo is facing multiple allegations of sexual harassment and has become the subject of an impeachment investigation. Many top NY Dems are calling on him to step down, while President Biden has refused to call him out. What's your take on the mainstream media coverage of the unfolding scandal?

Rogan O'Handley: It depends on which or what time you're looking at the mainstream media coverage. If you are looking at it in May of 2020 onwards, when a lot of people were calling out Governor Cuomo for his atrocious COVID-19 policies with respect to nursing homes and hospitals, the media was almost nowhere to be found back then, even though a lot of voices on the right were calling out for that. Once President Trump's term started to wind down, Cuomo's usefulness seemed to disappear and then you had media figures on the left calling for investigations.

And now we're seeing strong calls from Democrat leadership like AOC, and Chuck Schumer, and Kirsten Gillibrand to have Governor Cuomo resign even without an impeachment. So I personally think he will be removed from office one way or the other, resignation or impeachment. But it's to be determined how much he wants to stand up against these overwhelming allegations of abuse and atrocious COVID-19 policy that killed little over 10,000 people. So we'll see. But I think either way, he's not going to be in that governor's mansion for very long.

Sputnik: How likely is it that Cuomo will eventually be impeached, as he's facing mounting calls from fellow Dems to resign?

Rogan O'Handley: That's tough to determine; to have the leader of the New York House and the New York Senate, in the state level, call for his resignation and then to have arguably the most popular Democrat figure, AOC, call for his resignation. And then Senator Schumer, the Senate majority leader. So those are very, very powerful voices. I imagine Joe Biden is not far behind, although, I think Joe Biden maybe doesn't want to come off as a hypocrite, given all his sexual harassment and assault scandals of his own.