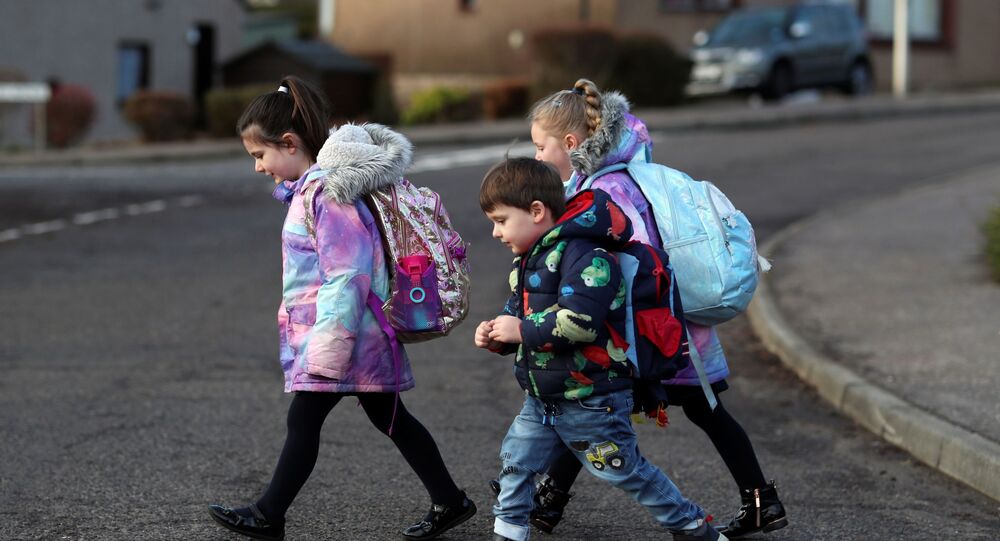 The Guardian reported on Thursday that controversial algorithms developed by the Office of Qualifications and Examinations Regulation as a means of awarding grades in the UK last summer will be scrapped, to instead grant teachers far-reaching powers to decide exam grades.

Dr Stephen Curran, a teacher of 35 years and former government adviser on educational issues, explains why the proposed grading system cannot be viewed as a reliable means of assessing children's knowledge.

Sputnik: Can the Department for Education's (DfE) new plan to allow teachers in England to decide exam grades help avoid the ‘exam fiasco’ the country witnessed in 2020?

Stephen Curran: My answer is no. I really think my response to the government's announcement would be: you can either be fair or flexible, you can't be both. You can either have short exams which are properly monitored, properly vigilated, and properly moderated across the country, or you have the other system, which is basically a free-for-all. You can't have both. I think it's perfectly possible, given the current lockdown restrictions being eased, children going back to school, it is possible for these exams, pared down exams, nevertheless, to be run. My view is that they should run them. And they shouldn't be down to a teacher - teachers and schools deciding whether or not they could run them in class or set the tests for children to do at home. I mean, there's no exam security in that, there's no real information. You're making the teacher the focal point of decision. I didn't agree with that last year and I don't agree with it this year. It's not that I don't trust teachers. It's that we can't moderate across the whole educational system. So what a teacher might decide in Rotherham may not be what the teacher decides in South End. How do we know that the grades being given are reliable? We don't.

Sputnik: How justified are concerns by the Education Policy Institute (EPI) that the new plan may result in “extremely high-grade inflation”?

Stephen Curran: I think it definitely will. I think that their concerns are absolutely justified. Last year we had grade inflation, grade inflation to the extent that I think one statistic, which I quoted, which was correct and was that the normal intake for trainee doctors was 7,500. It rose to 10,000. That's because the grades were inflated. They couldn't do anything about it, in other words, these youngsters had predicted grades of such and such. They had to get certain grades and they got those grades because it was grade inflation. It's causing huge problems for the universities, for employers.

Sputnik: What consequences could the UK education system face given that there are no national guidelines?

Stephen Curran: I think that the real problem we face is that for years and years to come, those youngsters will be saddled with those grades, and employers and those who will want to employ them in the future will look back and say, well, those grades weren't reliable. They'll know that the grades given in 2020 and 21 were really based upon teacher assessments, which really were quite meaningless. It's not that I don't trust teachers, it's that you can't moderate what they're doing across the whole country. Not with that kind of speed. I mean, you can put some kind of moderation systems in place. But when you've got all subjects being decided like this, it's a huge task and grade criteria and all these kind of things. Then you would need external assessors and moderators to moderate what the teachers are doing. The easiest and simplest way, it's not perfect, but it's the easiest and simplest way to deal with everything is an exam, that's straight forward. It's a paper, they sit down, they do it, it's marked. And it's marked and the mark can go to independent assessors, but generally speaking, it's marked. I don't understand why these shortened papers, which are more focused and don't go across the breadth of the curriculum, but go in and target certain things, it can't be used. Just use them, and don't compromise, otherwise, the system is compromised.

Sputnik: What did the exam fiasco in Britain tell us about the problems the education system faces?

Stephen Curran: I think our education system up until this point has been extremely good. And, well, trusted. I'm not saying there hasn't been an issue in the way the exams have been developed in Britain and the way they're marked with the grading systems. These things, there has been a tendency, I think, over the years for grades to go up, there's no doubt about that. The old system years ago used to be the top 10 percent get A, the next 20 percent get B, the next 40 percent get C. In other words, you've always got that idea that an A will only be given to the top 10 percent. When you move to a system where people can say where an A grade sits. In other words, it's 69, it's 63 or 75, whatever. You're in a kind of much more flexible system. And that's the system that's been adopted in the UK. And I think that's probably true of other countries as well. However, the fact that we moved back to a more exam-based system has been more reliable. We know that every child across the country has taken the same test. Now, some children might be disadvantaged and the rest of it. However, the best way to help, in my view, those children is to give them more assistance, not to lower or make exceptions. The exams should be solid. This is the standard. You have to reach it to get this grade. If we allow teachers to decide that, then there is no control. We're, obviously, in an extraordinary situation and other countries have the same problems as well. But in my view, the fact that we're coming out of lockdown gives us an opportunity to do the slimmed-down exams and to make them solid, to make them secure. But that's what I would do if I was in the education sector. I would say that you can't have it both ways. You can't give it to the teachers and then tell them to do tests as well.

Sputnik: If last summer's situation is repeated, how will university admissions officers distinguish between qualified applicants?

Stephen Curran: That's the problem we've got. I've already illustrated that with the increase in the intake of doctors, training doctors. Because the universities were forced to accept the grade. They couldn't do anything about it. If they said you've got to get an A, or two As or a B or whatever to get into Cambridge, but a lot of students won't get that. They'll get a C and a B, a C and two Bs, they won't get in. But I'm afraid last year, they did. It's very difficult when you've got your own students in front of you. You're more likely to be kind to them. You're more likely to have grade inflation simply because the teachers know the students, it's hard to be completely objective. And also, the schools have different systems of assessing. Some schools have monitored their students really closely all the way through the year. And they probably gave them tests and then they met with the department teachers and then they decided a grade. But we may have had other teachers in other schools, literally sitting down at night in their sitting room and just going through and giving a grade. How do we know? If you're going to have a fair system, you have to have standardisation. You have to have moderation across the system to make sure it's secure. We're not the only country facing this.

This is a problem that's going to be right across Europe, but the students, of course, are going to be very happy to receive a better grade. When they get their results and they open their envelopes, they're going to be joyful. But it's not the truth, is it? The truth is much more important, because in the end, if what you're given on paper is laughed out of court by people who are trying to employ you and just say, well, I know what will happen. This is one solution employers will use. And they were already using it because they didn't trust the exam system that much or system that much. But youngsters will go to a job interview, they'll say to the employer, I've got this grade, the employer will look at the grades and say that doesn't mean anything. Here's a test, do these tests. And they will say I've got the grade - oh, no no no, here's some test for you to do. And that's what a lot of employers will be doing. They will be setting intelligence or IQ tests to find out what's going on because they won't want to take on students or people if the grading is not reliable. Perhaps, they won't apply this that much to university students. I don't know what the universities are going to do this year. I'm not sure. But I think most of them have found ways of doing their exams. So, in my view, anyway, the basic point I would make is you can either be fair or you can be flexible but you can't be both. In the end, if you want to have a secure exam system or a secure grading system, then you can't have flexibility. You've got to have rigidity. You've got to have absolute control of it.