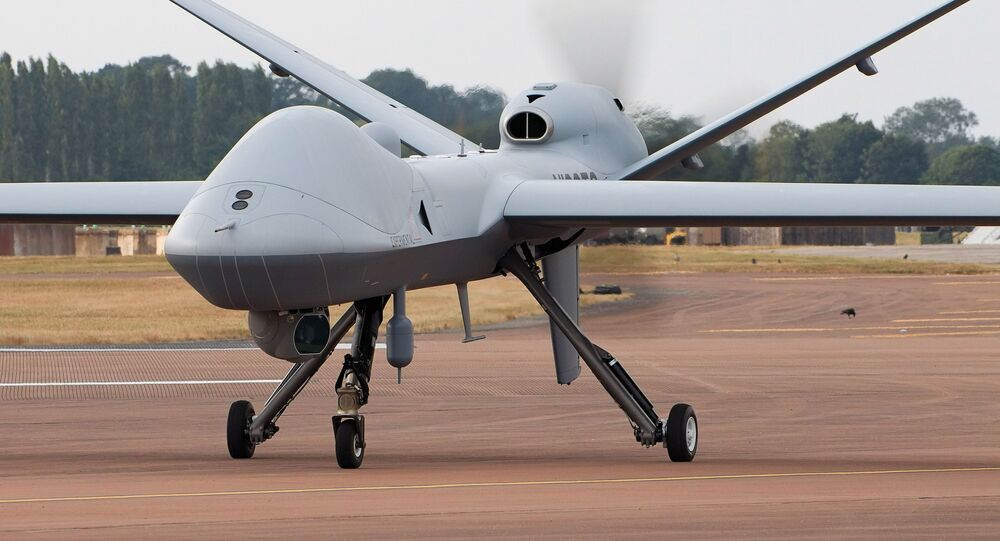 The Ministry of Defence is pushing for Unmanned Ariel Vehicles to be allowed to fly, unsegregated, over UK airspace. However, the Civil Airspace Authority remains unconvinced as to the safety of permitting drones to operate in this manner, Chris Cole of Drone Wars UK tells Sputnik.

US-based weapons and technology firm General Atomics recently announced plans for its SkyGuardian drone to be transported to the United Kingdom, so that it may be tested over the island's airspace. Chris Cole, the director and founder of Drone Wars UK, tells Sputnik that with this test flight the Ministry of Defence's objective of getting large military drones to be allowed to fly unrestricted across the island is one step closer to being realised.

Despite widespread concerns over the potential for such a move to threaten civil liberties, there is no attempt by the government to seek out the views of the wider UK public. "We believe it is vital that this democratic deficit is publicised and challenged and the public have their say in controlling drones in our skies," Cole says.

Sputnik: Explain the significance and implications of the recent announcement that General Atomics is to bring a company-owned SkyGuardian drone to the UK.

Chris Cole: These test flights will be a big step forward in plans to open UK skies to large military drones. Until now, such drones have not been allowed to fly in the UK for safety reasons, but ministers and drone lobbyist are putting pressure on regulators to accept new technology can make such drones safe to fly. These trials are part of that effort and follow similar tests in the US - although regulators moved planned flights away from populated areas.

Sputnik: What exactly is the dispute between the MoD and the Civil Airspace Authority vis-a-vis the flying of drones over UK airspace?

Chris Cole: Although large drones have been regularly flown by the military for more than 20 years, the technology is far from mature and they continue to crash for a whole variety of reasons. Alongside this, the bedrock of aviation safety – upon which all other safety measures are built – is that pilots are able to visually look and take evasive action if they see danger. Without an onboard pilot, drones are not able to achieve this fundamental safety task. The drone industry is developing electronic 'detect and avoid' systems to replicate this safety task, but it is largely untried and untested and (the industry) has yet to convince regulators that it is ready for use.

Sputnik: Former Royal Air Force (RAF) head Sir Stephen Hillier was appointed Chair of the CAA in August 2020. Could this be to help steer the CAA's position on the matter in a different direction?

Chris Cole: While the CAA is charged with implementing the government's airspace modernisation plans, it also has a key, public safety role and the two remits could well come into conflict here. Appointing the former head of the RAF to Chair the organisation at this time certainly gives the impression that [the] military and its desire to fly drones in UK skies will get a favourable hearing.

Sputnik: Why should the average person care about whether drones can fly in UK airspace?

Chris Cole: Opening UK skies to large drones is likely to have a huge impact. It is not only public agencies like the military and the police that will be flying large drones over our heads but private companies gathering all sorts of information. Polling we undertook in January shows that the public are far from convinced about the plans.

Sputnik: Do the UK public get any say as to whether drones will be permitted to fly over UK skies, segregated or otherwise?

Chris Cole: So far, all the decisions about this are being made behind closed doors with an unaccountable quango – the Airspace Change Organising Group, established by the Department for Transport and Civil Aviation Authority, to coordinate and implement government plans in this area. We believe it is vital that this democratic deficit is publicised and challenged and the public have their say in controlling drones in our skies.

Using Mercenaries to Operate UK Drones is 'Dangerous' and 'Should Be Ended Immediately', Expert Says