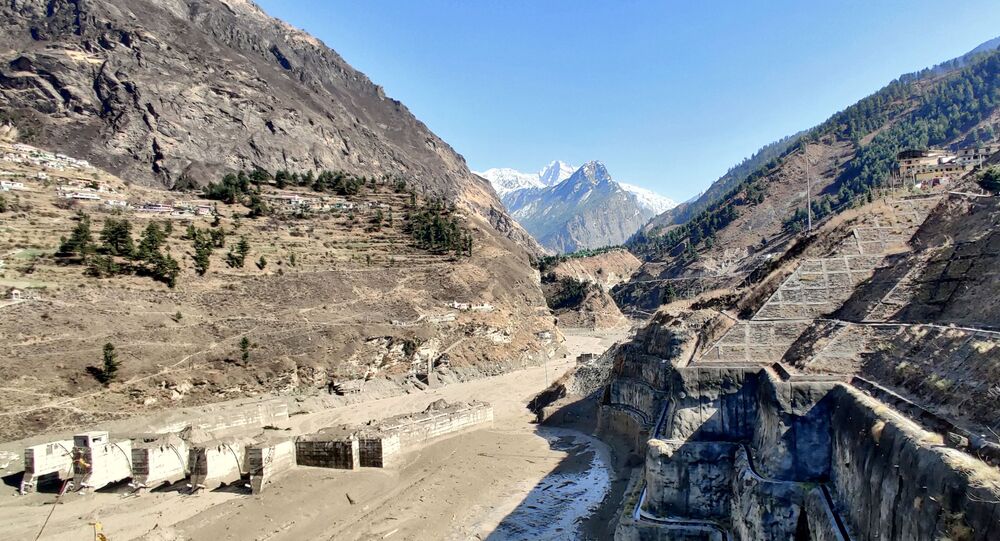 A glacier smashed into a dam on Sunday in the Indian state of Uttarakhand, triggering a massive flood that affected two hydropower projects in the state. According to officials, at least 14 people died and more than 170 people who worked on the projects are missing.

Sunday's glacier dam smash was the biggest disaster of its kind since June 2013 when flash floods killed around 5,700 people in the Himalayan state of Uttarakhand. Back then, expert warned that climate change was damaging the ecology in the fragile upper reaches of the mountainous Indian state.

Dr Farooq Azam, an assistant professor at the Indian Institute of Technology, Indore has more than fifteen years of experience in the field of glaciology and hydrology – he explained what might have caused the glacier to break away.

Sputnik: What's your take on the glacier tragedy in Uttarakhand?

Dr Azam: A possible avalanche-induced landslide or hanging glacier break that came to the valley bottom and blocked the river for some time. Such conditions possibly resulted in the small lake's formation over the river that burst after some time, releasing all debris, ice, snow, and water – a concentrated slurry – downstream.

It's a sporadic incident for a glacial burst to happen. Satellite and Google Earth images do not show a glacial lake near the region, but there's a possibility that there may be a water pocket in the region. Water pockets are lakes inside the glaciers, which may have erupted leading to this event.

Sputnik: What could be the possible reason?

Dr Azam: I don't like to predict anything before any study. Nevertheless, at first, it seems to be the result of global warming.

There is no doubt that global warming has resulted in the warming of the region. Climate change-driven erratic weather patterns like increased snowfall and rainfall and warmer winters have led to the melting of much snow.

The thermal profile of ice is increasing. Earlier the ice temperature ranged from minus six to minus twenty degrees Celsius, it is now minus two degrees Сelsius, making it more susceptible to melting. Also, because of climate change, such events are happening more in the last few decades. It is creating extreme events like snowfall, rainfall, drought, heat waves more frequently.

Sputnik: Did we learn anything from the Kedarnath 2013 tragedy?

Dr Azam: We still lack GLOF-oriented research in India. However, some advancement has been done using mostly computer models. We need field observations and a close eye on the lakes we have at high altitudes, meteorological data from high altitudes, more studies on glaciers, snow, avalanches, rockslides, landslides, etc.

Sputnik: Many projects are happening, especially in that region, like railway construction and Prime Minister's Chardhaam highways projects. Time and again, environmentalists have warned that these projects may affect the ecological balance in the Himalayan region.

Dr Azam: Most of the projects undergo EIA (environment impact assessment); however, due to lack of adequate understanding about snow, glaciers, the climate at high altitudes, landslides, etc, EIAs may not be really detailed.

Sputnik: Talking about the Rishiganga Power project, which is at the centre of the Sunday disaster, environmentalists and activists have warned about the environmentally hazardous practices of private companies, and even approached the High Court in 2019.

Dr Azam: I don't have information on this. Nevertheless, power projects help to cut the carbon emission. In the long run, power projects may help in saving the environment.

However, the Himalayan ecosystem is very fragile, also the geology, and utmost care should be taken before starting any new project.

We need to do more research about mountain hazards, install high altitude meteorological stations and investigate the riskiest lakes, glaciers so that some early warning systems may be installed to reduce the catastrophe effects.