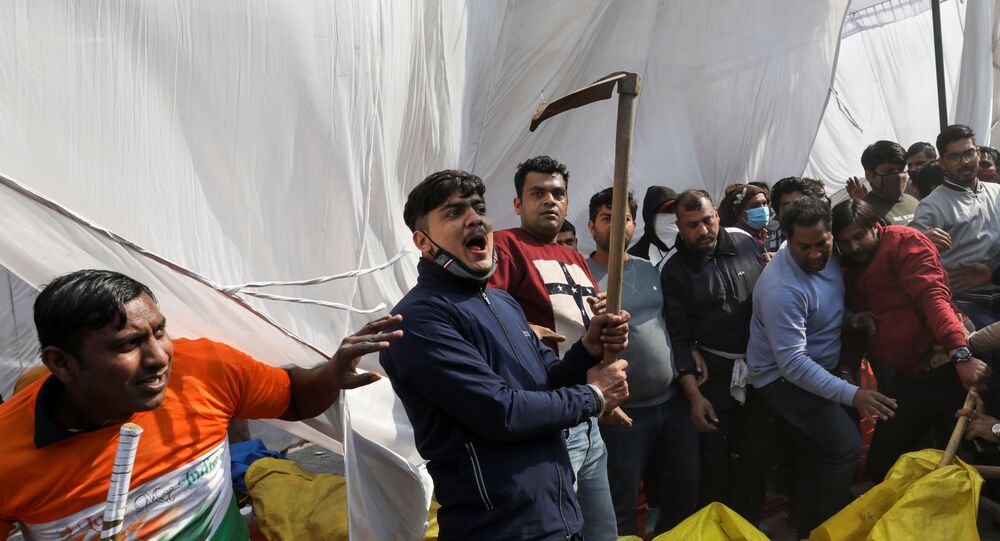 As protests against farm laws in India show no signs of abating, demonstrators invaded Delhi's iconic Red Fort, leading to violent clashes with the police on 26 January. Harjeet Singh Grewal, a member of the BJP's farmers' committee, has weighed in on the future of the controversial legislation in light of the continuing rallies.

Sputnik: How do you see the clashes between the farmers and police on 26 January?

Harjeet Singh Grewal: Now, farmers should end their protest. They betrayed the government and the police with the tractor march. There is no space for violence in the protest. All the leaders are answerable for the violence.

They planned it beforehand and shared the stage with mischievous elements like Punjabi actor Deep Sidhu and Mazdoor Kisan Sangharsh Committee leaders Satnam Singh Pannu and Sarwan Singh Pandher to lead the protests.

​Sputnik: How did the Narendra Modi government fail to control the situation?

Harjeet Singh Grewal: No, they didn't. They choose not to opt for violence and control the situation. Had it been a Congress government, the police would have forcefully removed the protesters or attacked them as they did in 1984 [1984 Sikh riots in Delhi].

Sputnik: Farmers have been protesting for the past two months, why has the government failed to end them?

Harjeet Singh Grewal: That's not true. I'm personally involved in the talks. I held several rounds of meetings between the farmers' representatives and the government.

But, these leaders don't want to end the protest. They are more interested in maligning the image of Prime Minister Narendra Modi and the BJP.

Sputnik: Do you think that they have been successful in harming Narendra Modi's image?

Harjeet Singh Grewal: Definitely, no. Commoners love Narendra Modi, and we are winning all the elections.

Sputnik: But many of the parties that were part of the BJP-led alliance have left the government of late.

Harjeet Singh Grewal: This is not true. Our friends stand with us.

Harjeet Singh Grewal: Abhay Chautala never supported us. INLD is still with us.

And, Rampal Mishra, he is a habitual quitter. He joined the BJP in 2019.

The BJP is a democratic party. We can't force people to stay with us. It's entirely their choice.

Sputnik: Is everything right within the party? Especially after the farmers' protests.

Harjeet Singh Grewal: Everything is right in the party.

Sputnik: But this will hurt the BJP;s image, especially in the upcoming Punjab state assembly elections in 2022.

Harjeet Singh Grewal: Less than half a million people are part of this protest. The population of the state of Punjab is 28 million, and these people are supporting the BJP on the farm bills.

We will easily win the election.

Sputnik: When will the protests end? What's the government's next step?

Harjeet Singh Grewal: We are open for talks. The problem is created by the anti-national elements like Yogendra Yadav and his gang. Remove him from the protest, and things will be resolved within five minutes.

Sputnik: Do you still believe that misinformation by some people like Yogendra Yadav is behind the protest?

Harjeet Singh Grewal: The rumours spread are that farmers' lands will be taken after new farm laws. Land is a sacred subject for farmers. It makes them insecure.

The farmers' were being told that "Modi will give land to the industrialists", leading to chaos within the community.

Sputnik: What are the positive aspects of these farm bills?

Harjeet Singh Grewal: We are giving autonomy to the farmers to decide the price of their crops. If some farmers feel that their product deserves a better price than the minimum support price (MSP), than what was decided by the government, why not give it to them?

Now, farmers can sell their crops in any part of the country. Earlier, they were unable to sell their produce to a different state.