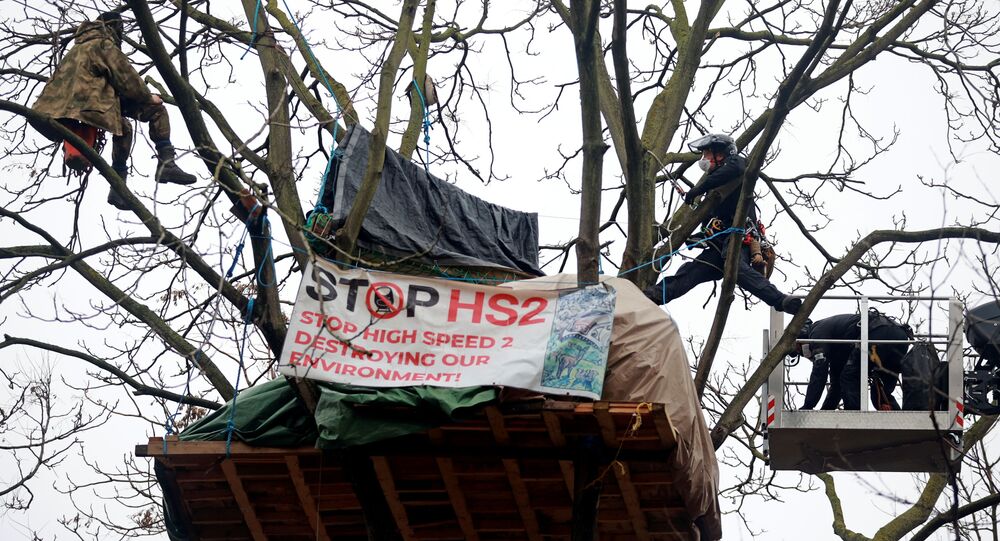 HS2 Protester: The Only Tactic to Achieve Social Change is Through Civil Disobedience

The protesters, who oppose the construction of the HS2 high-speed railway, have gone underground - literally. The activists say they have "prepared for a lengthy siege" in the tunnels as they're making a last ditch attempt to stop HS2, which they believe is "expensive, unpopular and destructive''.

Sputnik spoke with Howard Rees, one of the protesters from HS2 Rebellion, about their motives and plans as they try to stop the construction of the high-speed railway.

Sputnik: Why of all possible ways to protest did you choose to dig the tunnel under a park in Central London?

Howard Rees: It's not the only tactic - there is a broad range of tactics. We believe in breaking the law. We believe that, in the proud tradition of the likes of the suffragettes and the civil rights movement, and the Indian independence movement, and countless others, that the only way that you achieve positive social change - as has been demonstrated time and time, again, throughout history all around the world - is through civil disobedience.

That's not to say some of us haven't tried the channels of writing to MPs, signing petitions, going on the marches and all that kind of stuff. But really these things are generally proved to be futile.

So we believe in breaking the law. But we've done that in a manner of ways. Tunnels are particularly effective – again, as has been proved in this country and elsewhere, over many decades - because they are very difficult to extract you from.

So people can be up in tree houses, it can't last maybe a week perhaps longer. On average, people last a lot longer in tunnels than they do in three houses, it's a lot harder to pull them out.

But clearly, it is not a pleasant experience to have to live down a tunnel. And it demonstrates the courage and commitment to the cause of the people who volunteer to do so. They're brave heroes.

Sputnik: Could you please describe the process of building the tunnel. How much time did it take to build?

Howard Rees: As far as I remember: a month. We started in September, but the workers escalated. The last couple of months was when most of the work had been done. And the process is obviously big, one of digging out the earth and removing that and disposing of it surreptitiously and crucially shoring everything else with wooden planks and stuff in order to ensure that there will be no collapse of the tunnel.

Sputnik: How did you manage to build it without the police noticing? How much time did it take you?

Howard Rees: First of all, we built a large building to live in, out of pallets, so that concealed where we were digging. And then it's been a question of disposing of the soil.

And a lot of that has gone into the pallets - into the walls of the structure which is a strength of the structure, it means that it's built out of mud and stone as well as wood. And certainly in the early days - that's where most of it was going on. Once we started running out of room, it started being disposed of a little bit more openly. So it opens a question whether we truly did manage to evade detection.

Sputnik: How safe is the tunnel for you and local residents?

Howard Rees: It's totally safe for local residents, it's at a depth and of a size where even if it collapses underground it's not going to have any effect at surface level. So it's not underneath the road, it's underneath the park. So there's absolutely no danger whatsoever to any members of the public.

Obviously, you can't completely eliminate any risk to the tunnel and the people living down the tunnel themselves. Even miners with training and experience and all the equipment, there are still disasters, these things can happen.

But we are pretty confident that we've done a good job and that there won't be any problem here. There has never been any serious injury from any activist tunnel in the UK over all decades that they've been used. So we're very confident that it's safe.

Sputnik: Okay, and how did the locals react to your project?

Howard Rees: They're very supportive. We've got the support of the local community. Nobody wants to see the trees cut down.

Sputnik: How long a protest are you prepared for?

Howard Rees: There's no limit to how long. We theoretically are prepared to go for as long as we can until HS2 is scrapped.

Sputnik: Are you actually prepared for confrontations with the police?

Howard Rees: We're non-violent, we do not want any confrontations with anyone. We're strictly non-violent.

Sputnik: According to government research, the construction of the HS2 project does not cause significant harm to the environment. In addition, according to Boris Johnson, it will create 22,000 jobs. Isn't this a good thing?

Howard Rees: To say that something is causing no harm to the environment, when you're chopping down 108 major woodlands and you're chopping down more trees than have been chopped down at any point in excess of 100 years, this country used to be covered in forest and now there is barely any forest left.

And we're in the process of chopping down a very large portion of what little is left. During the First World War, a huge amount of timber was needed and as a result of that, we had the creation of the Forestry Commission to plant new wood plantations, essentially.

And those aren't sterile pine plantations, they are thriving ancient woodlands that provide habitat for all manner of biodiversity. We have an ever-growing number of species in this country, particularly ones that have the moniker common because once upon a time they were common, they were so ubiquitous they were called common.

And now they're on the endangered list, and they're close to extinction. Countless reports, the UN report on biodiversity has said how we're not just in a climate emergency, we're in a broader ecological emergency - we're in the sixth mass extinction. So to be wiping out habitats for species that are already endangered is an obscenity.

And when you talk about creating jobs, 22,000 jobs, yeah at the cost of £230 billion (roughly £10 million per job created). If you think about how many doctors and nurses you could employ for that kind of money, you could have a lot more jobs and those would be jobs doing something useful: healing the sick in the middle of a pandemic, rather than destroying our country, our countryside, our wildlife, our way of life and our future and our children's future.

Those aren't jobs that I want. I'd like jobs that actually help make the world a better place.