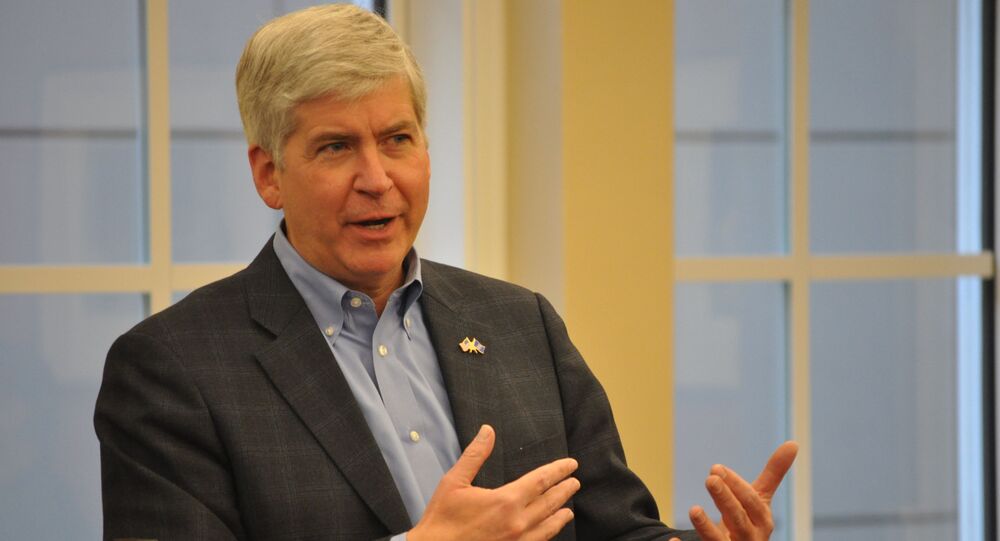 The people of Flint, Michigan continue to wait for their pipes to be replaced, nearly six years after their drinking water was contaminated by lead, following a decision approved by the former Republican Governor to save money by changing the city's water supply to that of a nearby polluted river.

Criminal charges have been brought against former Michigan Governor Rick Snyder, along with a number of other former state officials, for their alleged role in the poisoning of the water supply of the city of Flint, along with the purported subsequent cover-up. In 2014, a Snyder-appointed emergency manager of Flint switched the area's water supply from the nearby city of Detroit to the polluted Flint River, in an apparent bid to save money. The corrosive nature of the new water source resulted in lead, a very dangerous neurotoxin, leeching into Flint's water supply.

Both adults and children alike bathed and drank the contaminated water, before it was known how dangerous it had become. Despite repeated complaints about the smell and taste of the water from Flint residents, city officials repeatedly assured them the water was safe and apparently sat on information that it had become toxic. Over 100 deaths have been linked to the contamination as well as life-changing injuries, such as brain damage, for thousands of adults and children alike. Snyder currently only faces two counts of willful neglect of duty, which can result in a maximum of one year in prison and a $1,000 fine upon conviction. However, a number of other officials face up to 15 years in prison, under charges of perjury, involuntary manslaughter and misconduct in office.

Independent journalist Jordan Chariton is CEO and co-founder of progressive news outlet Status Coup. Chariton has written extensively about Flint, including 17 on-the-ground reports from the city. Chariton's most recent article with The Intercept, co-authored with Jenn Dize, details a "flurry" of phone calls between Snyder, his chief of staff and his health director at the same time Legionnaires' disease was breaking out in the water supply, in October 2014. Snyder would later testify at the US Congress, under oath, that he only learned of the outbreak in January 2016.

Sputnik: What exactly was the role of Rick Snyder’s administration in the Flint water crisis?

Jordan Chariton: Governor Snyder and his administration approved Flint leaving the Detroit water system, that it received its water from for decades without a problem, in favour of joining a new water pipeline (that was a "regional" pipeline system but in reality a major step toward privatisation). Snyder's emergency manager — that he appointed to run Flint over the Democratically-elected Mayor and City Council — approved the decision for Flint to temporarily use the Flint River while the new water pipeline was being constructed.

Snyder's environmental department officials rushed the switch to the Flint River despite a Flint water plant operator advising against it because the water plant was not ready or equipped to treat the water for safe drinking water use. Soon after the switch, residents began complaining of smelly/discoloured water and rashes spreading on their body/losing their hair. Our reporting indicates Snyder and his top officials knew about this and actively covered up the problem, including the deadly Legionella outbreak that killed as many as 115 people, according to PBS.

Sputnik: Do we know whether Snyder was really aware of exactly what was going on?

Jordan Chariton: Our reporting indicates Snyder and his top officials knew about the deadly Legionella outbreak as early as October 2014 — six months after the water switch and 16 months earlier than he testified under oath to Congress — and actively covered it up weeks before Snyder's re-election (and then for a year after).

Sputnik: How did the Obama administration deal or not deal with the crisis as it emerged?

Jordan Chariton: President [Barack] Obama declined to issue a federal disaster declaration, which would have triggered more federal dollars and resources like the Army Corps of Engineers to go into Flint and dig up the pipes and replace in an expedited manner. The President also went to Flint in 2016 and sipped a glass of water at a local high school event. According to Michael Moore, it wasn't actually Flint water but water from Air Force One. A very significant portion of Flint to this day holds animus toward President Obama for doing that (and not doing more for Flint).

Sputnik: Rick Snyder endorsed Joe Biden for President. What message do you think President-elect Biden sent to the people of Flint when he accepted and touted Snyder’s endorsement?

Jordan Chariton: Flint residents and sources I spoke to were outraged that Joe Biden didn't reject Snyder's endorsement (and that his campaign actively promoted it). I can't measure how it affected Biden electorally — he did win Michigan, so I guess it didn't hurt him in an overall sense.

Sputnik: Has life returned to normal for the people of Flint?

Jordan Chariton: No, seven years later people are still experiencing rashes, hair loss, and in many cases, receiving discoloured and odorous water. They also have not replaced all the pipes in Flint, so the water is still going through busted pipes that were destroyed by the Flint River for 18 months in 2014 and 2015. Residents' damaged interior home plumbing has also not been touched/replaced.

Sputnik: Is there a prospect that a Biden administration may finally resolve the difficulties the people are facing there?

Jordan Chariton: For starters, our reporting indicates Governor Snyder perjured himself in front of Congress when he said he didn't learn of the deadly Legionella outbreak in Flint. Perjury in front of Congress is a serious crime. Joe Biden and the Democrat controlled Senate and House have every opportunity to bring Snyder back in for further questioning. There's also nothing stopping Biden's Department of Justice from filing federal charges against Snyder. Joe Biden can also still send in the Army Corps of Engineers to expedite the replacement of pipes. He can also extend Medicare For All for the residents of Flint who grow sicker every year as the effects of heavy metal poisoning progressively worsen as the years go on (not to mention the other contaminants residents drank).

Criminal Charges Dropped in Flint Water Crisis, Will Residents Ever Get Justice?