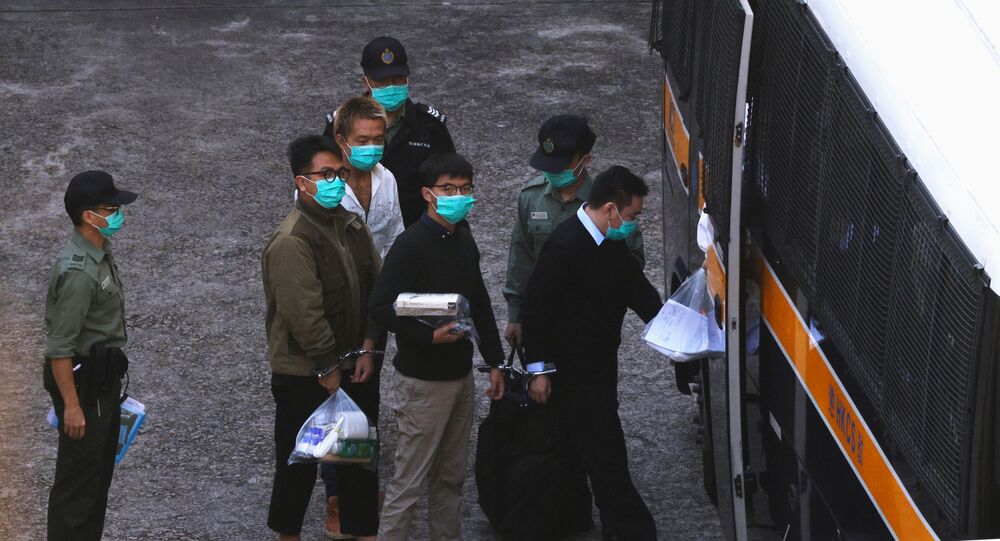 The ongoing US-China trade war has seen skyrocketing tensions as Washington and Beijing trade tit-for-tat measures and diplomatic ties sour to historical lows ahead of US president Donald Trump's prepared departure from the White House.

Dan Faggella, chief executive of Emerj AI Research, discussed his views on the ongoing US-China trade war as well as views from a US perspective on China's influence in the global tech industry.

Mr Faggella is an expert on use-cases and return on investment (ROI) for the artificial intelligence (AI) industry, and works with global enterprises in financial services and cybersecurity.

He has spoken at events for some of the world's top organisations, including the United Nations, World Bank, Organisation for Economic Cooperation and Development, Interpol, and many others.

Sputnik: What do you make of the recent Chinese countermeasures against officials linked to the National Endowment for Democracy and National Democratic Institute? Why is Hong Kong such a key battleground for American geopolitical interest, namely in tech markets?

Dan Faggella: Hong Kong is an indicator of China's willingness to flex its power by force and a clear leading indicator of what will only be a matter of time in the South China Sea and Taiwan.

© AP Photo / Susan Walsh
Dominic Raab Urges China Not to 'Stifle' Hong Kong Opposition Leaders as UK-China Ties Hit New Lows
While Silicon Valley is not trembling about this event, tech startups have reportedly begun leaving Hong Kong and there is a strong sense that the internet will only continue to bifurcate.

The free world internet will see its influence reduced further in Asia as China pulls users into its physical and digital ecosystem, but what this means for the future of online products and markets is hard to say.

Sputnik: Just how far could tit-for-tat measures progress as China and the US compete under a Biden administration? What can you tell us about Joe Biden's China policy, and does it differ from President Donald Trump's 'America First' platform?

Dan Faggella: I can comment that it is clear that Biden will be less antagonistic overall. Some tariffs will probably stay early on, but who knows how long and in what form they will take.

Some people argue that Trump's measures would favor a China seeking to carve out a new global order, while others may say his policies are what the West needs to prevent China from spreading its authoritarian regime, but only time will tell.

Sputnik: The UK government has banned all Huawei kit from British networks from September 2021 and is now limited to two primary vendors, Nokia and Ericsson. As per the Government's plans to diversify entreats to the UK market, London will also trial OpenRAN tech with Japanese telecom NEC. What are your thoughts on OpenRAN, is it a viable alternative to vendor-specific networks, and can it fill in sufficient capacity for telcos to provide stable, reliable services for increasing interconnectivity needs to the UK by 2027, the deadline to remove Huawei kit?

Semiconductor Manufacturing International Corp
Washington 'Fundamentally' Misunderstands End-Use Of SMIC Tech, Company Says Amid US Trade Measures
I do not have a firm enough vendor vs vendor assessment of these firms, but it seems to be patently obvious that removing any Chinese taps to Western infrastructure is sound decision-making. Are the other vendors up for the task? I hope so.

Sputnik: From a realpolitik perspective, what are the potential risks of China surpassing the United States in global tech? Which US political and economic interests are at stake should Beijing overtake the US in key technologies, namely amid the State Council's $1.4tn Made In China 2025 and Modern Military 2027 pledges? How should Washington respond?

Dan Faggella: The US already has severe disadvantages compared to China in some elements of national AI power and the ability of the ruling party's ability to wield it. The US would need more investment in basic research, in addition to a space race sense of national unity around upholding freedoms.

HSBC
China 'Trumps' US As Top Market For Asia-Pacific Business Amid RCEP Trade Deal, COVID-19, HSBC says
A digital world run by China would mean more of China's values seeping in through those channels. World of Warcraft users would not be able to talk about Uighurs, more movies would need to remove flags of Taiwan, and others. These are baby steps in a grander mind-molding that China does with its own citizenry, and would love to extend to the world.

Digital permeability in the West is something that needs to be addressed as critical to both national security and relative tech advantage.