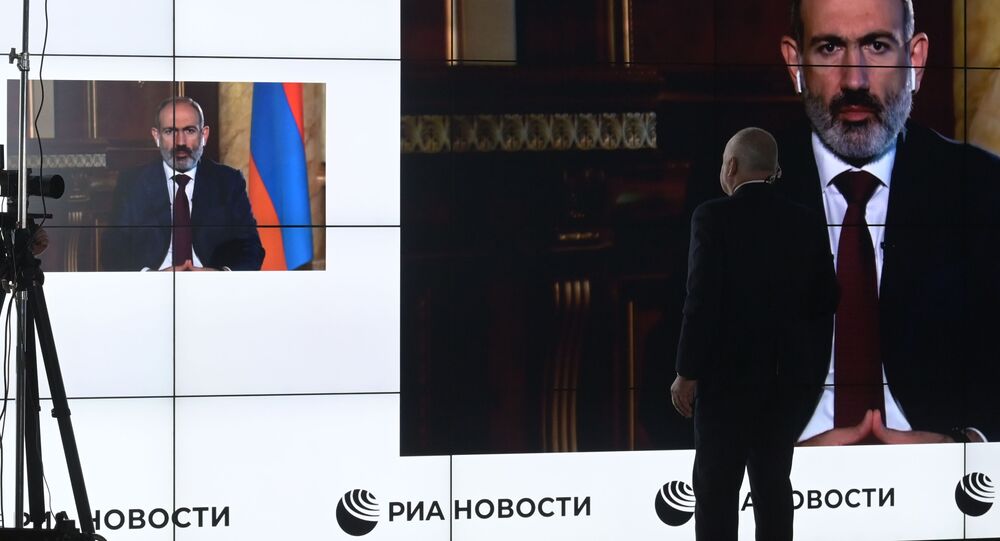 The conflict in Nagorno-Karabakh, which escalated at the end of September, has reportedly claimed several hundred lives. Despite the reached agreement mediated by Russia, there is no sustainable truce yet. Sputnik head Dmitry Kiselev spoke with both Armenian and Azerbaijani leaders in parallel interviews.

Armenian Prime Minister Nikol Pashinyan explained in an interview to Rossiya Segodnya Director General Dmitry Kiselev how he sees the situation, the number of casualties Yerevan has taken and commented on the presence of foreign mercenaries in the region. He also spoke about who is behind the current aggravation of the conflict and why, what compromises the Armenian side is ready to make and what it will not accept under any circumstances.

Dmitry Kiselev: Good afternoon, Mr Prime Minister. We appreciate you agreeing to answer our questions at this difficult time for Armenia and the world. How do you evaluate the results of the combat operations since 27 September? What are the losses of the sides, and how many prisoners are there?

Nikol Pashinyan: The situation is very tense. There are a lot of losses on both sides. The Self-Defence Army of Nagorno-Karabakh is holding the line, organising the defence, and I can assess the situation as quite difficult.

Dmitry Kiselev: In other words, it is not yet possible to estimate the losses of the parties and the number of prisoners?

Nikol Pashinyan: Many experts say that this is a war of unprecedented proportions in the 21st century. Because it involves all kinds of weapons: tanks, drones, aircraft and helicopters, armoured vehicles, artillery, rocket artillery and so on. And a lot of soldiers and troops are involved in these military activities. I mean that very large-scale and fierce battles are going on, and at the moment, the Self-Defence Army of Nagorno-Karabakh is holding the line. And we can practically say that the “blitzkrieg” plans of Turkey and Azerbaijan to take control of Nagorno-Karabakh have so far failed.

Dmitry Kiselev: Mr Prime Minister, we often hear about foreign mercenaries and terrorists who are fighting on the Azerbaijani side. Do you have any proof of that, and are there any foreigners fighting on the Armenian side?

Nikol Pashinyan: The whole world is already talking about this. This is a critical nuance, and it is also important because it will help you understand who started this war and for what reasons. Of course, there is concrete evidence that terrorist fighters from Syria are fighting against Nagorno-Karabakh. This video evidence has already been published in social networks and the media. It is now obvious that Turkey is the main sponsor of this war. Turkey has hired and deployed these terrorist fighters in the Nagorno-Karabakh conflict zone. By decision and under the patronage of Turkey, it was decided to start a war, an attack against Nagorno-Karabakh.

It is important to understand why. Because it was obvious that the army of Azerbaijan alone is not capable of fighting against the Self-Defence Army of Nagorno-Karabakh. That is why Turkey decided to use terrorists, Turkish troops – they are involved not only in leading military operations but also directly, with the special forces of the Turkish army [on the ground].

According to some reports, special forces of the Pakistani army are also involved in the hostilities. And I think that as far as Turkish fighters' participation at least is concerned, this has already been proven all over the world, because a lot of international media are already writing about it.

Very interesting report has come in recent days from Russia, from the North Caucasus, where militants were eliminated in Chechnya and Dagestan, and there was information that these militants came to Russia from abroad, came from Syria. And I see a direct connection here, in this process: fighters from Syria were transferred by Turkey to the conflict zone in Nagorno-Karabakh to start a war against Nagorno-Karabakh, and now they are already appearing in the North Caucasus. This is a very remarkable fact, which shows that this situation is no longer just Nagorno-Karabakh, but went beyond its limits, in its local sense. This is a regional full-scale conflict, which affects the specific interests of regional countries. And I believe that especially Russia should be very cautious about this fact.

As for the Armenian side: of course, there are no foreigners to fight on the Nagorno-Karabakh side. There may be some Armenians from the diaspora who come to support their compatriots. But, of course, they cannot be considered mercenaries.

Dmitry Kiselev: The Moscow Agreement of 10 October mentions the basic principles for settlement, please explain these principles, how do you understand them?

Nikol Pashinyan: These principles are well known: the right of peoples to self-determination, the non-use of force or threat of force, and territorial integrity. The question is how these principles are interpreted by the parties. Because during the negotiation process, it turned out that different parties interpret these principles differently. And now we have a situation where one of these very important principles has already been violated. I have already talked about it - the non-use of force or the threat of force to resolve the Nagorno-Karabakh issue.

Dmitry Kiselev: Mr Prime Minister, when it comes to compromises, what would you be prepared for? And is there a line beyond which you would not back down under any circumstances?

Dmitry Kiselev: Excuse me, would you clarify which specific compromise you are talking about?

Nikol Pashinyan: I said that Armenia was ready for compromises. And you asked if there was a red line that we would not cross. And I said yes – it is the right to self-determination of the people of Nagorno-Karabakh.

Dmitry Kiselev: You simply talked about the line, but about a specific compromise? You wouldn't like to give examples of such a compromise, is that right?

Nikol Pashinyan: This is not a question of some personal ambition. I would like to see the Nagorno-Karabakh conflict finally resolved in the end. Based on a compromise. I would like us to find a solution that is acceptable to all sides - Armenia, Nagorno-Karabakh and Azerbaijan. And that would be the final solution.

Dmitry Kiselev: Mr Prime Minister, I asked all the pre-planned questions. Perhaps there is something else you would like to add?

Nikol Pashinyan: Certainly. Answering your first question, I said it was very important to pay attention to the goals that Turkey has in this process. I'm confident that Turkey, after the well-known events of the beginning of the 20th century, seeks to return to the South Caucasus in order to continue its policy of Armenian genocide. It's important to know that it is a practical goal for Turkey. It is not an emotional goal but a practical goal, because Armenians of the South Caucasus are the last barrier for Turkey on its path towards expansion to the north, east and south-east because I believe this is a continuation of the imperial policy of Turkey. And everything that is happening now in the South Caucasus needs to be considered in the context of Turkey's policy in the Mediterranean Sea, Libya, Syria, Iraq, Greece, and Cyprus.

What is happening now – I have already said – this process has already gone beyond the local Nagorno-Karabakh conflict, and is being redefined. Turkey wants to redistribute, or, to be precise, to take control over the South Caucasus, so it would serve as a foothold for its further expansion in the north, east and south-east directions.

© Sputnik / Vladimir Trefilov
Exclusive: Azerbaijani President Aliyev Says Armenian PM Pashinyan is a Product of George Soros - Video
I think that this situation already particularly affects the national security interests of many countries, including, first and foremost, the Russian Federation. I did not accidentally recall the information that comes from Chechnya and Dagestan. Where did those militants come from and how did they appear in Chechnya and Dagestan, Syrian militants?

For me, it is obvious that they came from the Nagorno-Karabakh conflict zone. And the question is whether this is an accident or a planned action to destabilize the North Caucasus in order to distract Russian attention from the events that are currently taking place in the South Caucasus - the Nagorno-Karabakh conflict zone. This is a critical nuance that Russia has to consider.