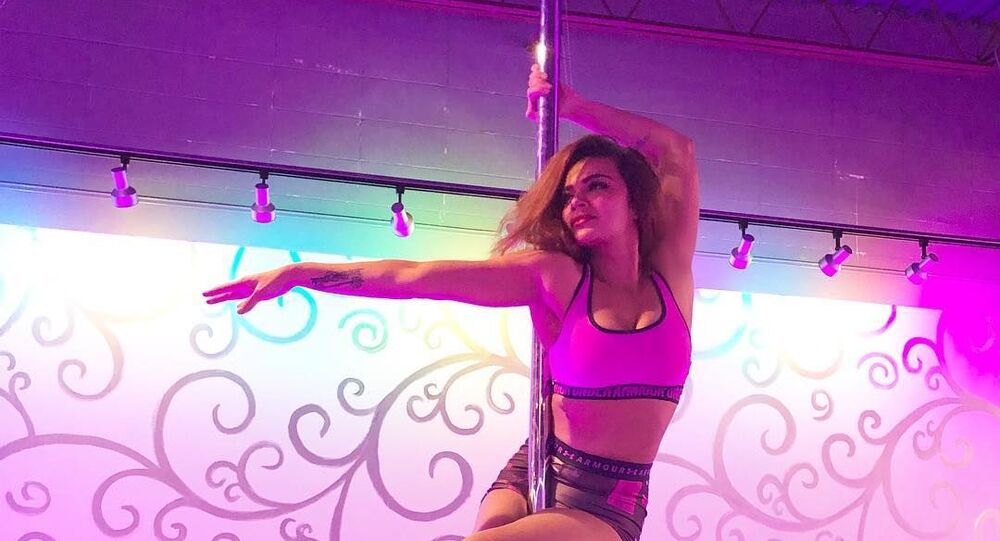 Popular Indian television actress Aashka Goradia Goble is breaking the stereotype attached to pole dancing while inspiring many other women to embrace it as a fitness regime.

Learning from the past 1.5 years, the 34-year-old swirls, twirls, and walks around the pole like a pro and her pole dance videos on social media have received thousands of likes, giving her fans a new goal to explore.

Passing on the learning to others, Aashka is open to teaching the art form to people in India’s coastal state of Goa for free.

On World Pole Dance Day (30 September), actress Aashka Goradia Goble spoke to Sputnik about the changing perception of pole dancing from the traditional view that it is nothing beyond a stripper’s act in a club.

Sputnik: After showcasing your acting prowess in TV shows such as “Kkusum”, “Laagi Tujhse Lagan”, and “Naagin”, you have added another feather to your hat by learning and promoting pole dance fitness in India. When did it strike you to learn pole dancing for fitness?

Aashka Goradia: I first saw pole dance when I was 21 and it completely blew my mind. But I also realised that it requires a lot of strength to be on the pole swinging at such an ease. I started with strengthening the core by doing yoga for a year with my American-Indian husband Brent Goble, a certified yoga teacher in India. In 2018, I was on a vacation to my in-laws in the US and there I attended pole dancing classes for just five days.

Sputnik: How was the experience there?

Aashka Goradia: On the first day, I had a lot of bruises on my thighs and had to soak myself in salt and water. But I didn’t stop. The transition and just being around on the pole is so rejuvenating that it stirred my mind. I got a pole custom-made from the US and installed at my house in Mumbai. It has been over 1.5 years and I just love pole dancing. Spinning on and off gravity gave me a new high and when I'm off it, I'm so calm. When I'm done with my hyper days of work, the first thing I want to see is my pole.

#polefit I had a chance to take 5-7 classes with @aerialbombshell and I thought I might not be able to learn much in such less time, little did I know that my fabulous self taught pole guru would make me do things beyond what I thought. A good teacher gets the best out of their students. I miss her beautiful face and voice.. that would have a big smile with “Yes yes yes, you are doing it right, yes yes, you got it right.” You made me feel so different about myself. I thank you for that @aerialbombshell . . . PS - for those with highly judgmental mind and speech... there’s more to this and I will post it too. 🤪 #tuesdaytransformation

Aashka Goradia: Pole dance is more than just a stripper’s act or a bar prop. We still have a long way to go because of the kind of society we live in and the social conditioning we have had, people look down upon pole dance fitness. What they really don’t see is the hard work and finesse it needs to pursue this art form.

It makes you feel so strong and sexy. We all have deep-rooted sexiness. But because we feel shy, we don’t explore it. It’s your romance with the body and you don’t have to have a bikini body to be on the pole.

I've seen heavy plump women go up on a pole and do such beautiful turns. Pole dancing lets you celebrate your body.

Sputnik: Do you see pole dance as a great fitness regime?

Aashka Goradia: Yes, of course. It is one of the most difficult yet strength-building activities. It requires upper body strength and core strength. It’s just not about dancing and swirling around it. It is working along with the mechanism of the pole being a static iron stand and working against gravity. There are international pole dance championships that take place every year and now, there are talks going on in Europe to consider pole dancing as an athletic sport in the Olympics.

Sputnik: Do you foresee pole dance fitness becoming a big trend in India in the coming time?

Aashka Goradia: I hope so. Many international pole makers are planning to enter India’s fitness market. They are going to set up poles in gyms and also train people to educate. I’m also in talks with a company to start pole education in Goa soon. I want to see poles coming to India like gym fit and gradually grow big and mark our presence at international championships.

Festival of Sensuality: Pole Dancers and Athletes From Around the World Compete in Russia's Far East

Bear the Pole Dancer: When There is Nobody Around to Scratch Your Back