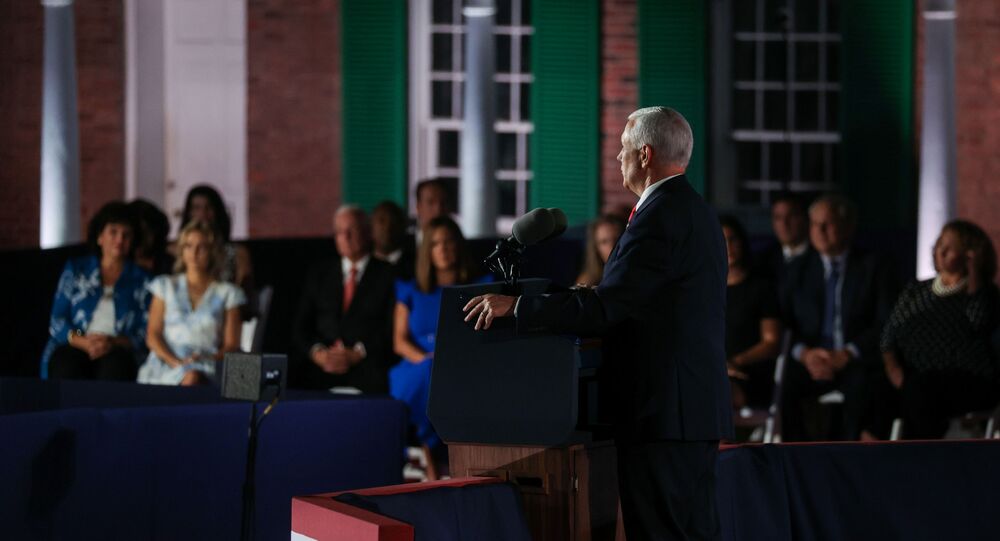 The Republican convention kicked off in Charlotte, North Carolina on Monday and has been a combination of virtual recordings and live segments, while the party's nominee and current US President Donald Trump is scheduled to give a speech on the final day of the event.

After being re-nominated by the Republican Party as Donald Trump’s running mate, US Vice President Mike Pence stated at the Republican National Convention on Wednesday that people "won't be safe in Joe Biden's America".

Sputnik talked to Laura Wilson, Political Analyst and Political Science Professor at the University of Indianapolis, to discuss Pence's speech.

Sputnik: Vice President Mike Pence took centre stage Wednesday evening to insist that incumbent President Trump will bring the US economy back to its heights if he gets four more years in office. He also emphasized that Trump has done what he promised back in 2016. How much do you think this point matters for the audience? Is it possible that this argument might draw still voters sitting on the fence, especially in light of post-COVID economic circumstances?

Previously strong economic indicators have been faltering, and while this has happened under the Trump administration, it has only been in the last few months while the first few years of his presidency saw a stable and robust economy.

For voters who are feeling the effects of this downturn firsthand, the pledge from Pence that the president can and will lead the country in a new direction towards economic prosperity is key.

Sputnik: Pence continued going after Joe Biden's platform, calling the Democratic nominee a "Trojan horse for a radical left." He claimed they "hardly ever mentioned" American ideals. How do you assess the polarized agendas of the parties?

Laura Wilson: Both conventions reveal the tense polarization that characterises American political parties, if not the political climate, today. Republicans and Democrats each claim that the other has a radicalized agenda, using fear and extremes to drive voters towards their own cause.

It is unclear whether or not Americans themselves are this polarized (public opinion data, for example, consistently reveals that a majority of the electorate is more moderate than extreme) but the parties certainly emphasise their differences by positioning themselves as the moderate, reasonable alternative to their radicalized, extreme opposition.

They embrace this narrative as a strategy to attract voters but it simultaneously reveals a dark underside to the two-party system in which winners take all and losers get nothing.

Sputnik: According to analysts, this speech gives Pence support within the GOP, which might help him if he decides to run for president in 2024. How do you evaluate this prospect? Who is behind Pence?

Laura Wilson: Vice President Pence has positioned himself for a future presidential bid and that strategy goes back to his selection by President Donald Trump for the Republican party ticket four years ago. Pence carries the cultural and religious conservatives and represents the socially conservative facet of the party that has grown in size and strength.

In many ways, Pence's speech praising Trump at the RNC also serves as a reintroduction of himself to the American public; it is a reminder of who he is and what he stands for, connecting himself to the successes of the administration in a way that puts him in a strong position to be considered for the top post himself in the next election cycle.

Sputnik: The third day of the RNC presented live in-person speeches with pre-recorded segments, opposed to mostly pre-recorded speeches at the Democratic Convention. How has this been perceived by audiences?

© REUTERS / JONATHAN ERNST
'You Won't Be Safe in Joe Biden's America': Pence Accepts VP Nomination, Addresses RNC
Laura Wilson: The dynamic of the pre-recorded speeches compared to the live delivery feels very different, both to the speakers and the audiences watching.

There is a sense of camaraderie among the audience when responding to a live speech, hearing others' reactions that reinforce one's own feelings and the prerecorded option with no audience response lacks that same feeling.

The pre-recorded speeches occasionally felt like a drawn-out commercial, being spoken to rather than speaking with. Having a live audience provides that excitement and energy that the conventions want to create, but of course concerns about public health issues and logistical challenges surrounding those challenges made it much harder to do.