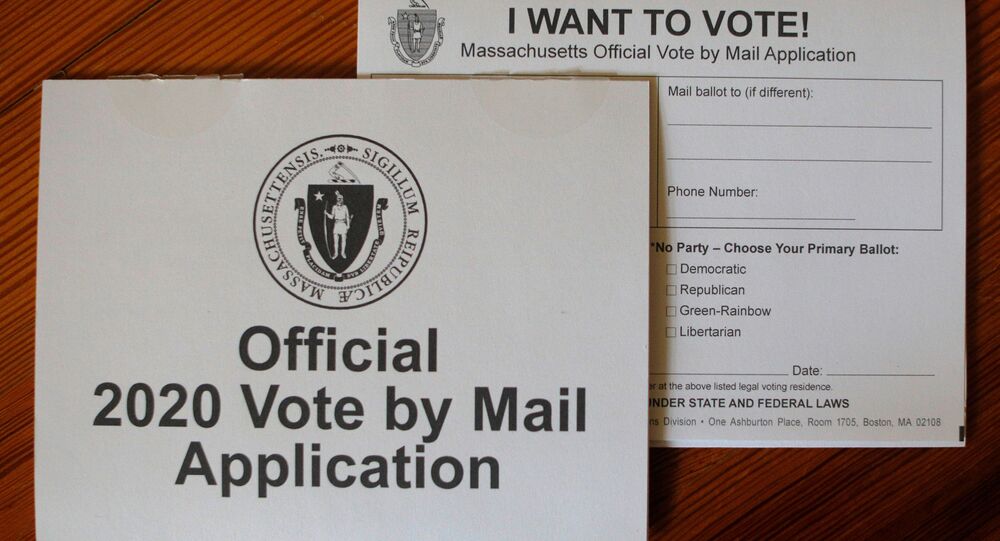 Last week, US President Donald Trump suggested that the November presidential election should be postponed to prevent any fraud that might result from mail-in voting. His idea was met with harsh criticism from Democrats, who stated that the president has "no power" to delay the election.

Republican Charlotte Svolos, who is running for election to the California State Assembly to represent District 2, has shared her views on a variety of issues: from her own bid and the coronavirus situation in California, to President Donald Trump's suggestion to delay the 2020 presidential election, and mail-in ballot concerns.

Sputnik: You are running for the California State Assembly to represent District 2. What are the main challenges and issues the people of your district are facing right now?

Charlotte Svolos: Right now, we have five counties in my district, primarily rural counties, that have farming or tourism as industry, and the biggest thing that I'm getting, especially as a special education teacher, is getting our schools back up and running and getting our businesses back up and running. I was just talking with somebody today about the coin shortage, which isn't so much a shortage of actual coins. It's a shortage of circulation. They're not moving. Because either places are only taking touchless currency and therefore they have the change in their cash registers being unused or sitting in people's homes because of the isolation.

Sputnik: Speaking at a press briefing at the White House, President Trump again criticised the mail-in vote: “I just feel like I don’t want to postpone the election. I want the election to be in November, but I also don’t want to wait three months for its results, and then find out that all the ballots sent by mail have disappeared, and the elections mean nothing". Do you agree with this position? What are your predictions regarding the postponement of the elections and the way the ballots will be conducted?

Charlotte Svolos: I'm fairly certain based on the mechanisms that are required to actually delay a vote, and the fact that we have a split House and Senate right now, that we won't see a delay in the election, because whether or not an election is held, January is the end date of the presidency. And at that point, the Speaker of the House would have to take over, whether an election was finished and certified and conducted anyway.

Sputnik: California is suing the Trump administration to block an order that would exclude undocumented immigrants from counting towards congressional apportionment. What court decision do you expect to see on this issue? Is it right, in your view, to count the votes of unregistered immigrants?

Charlotte Svolos: We need to not allow unregistered immigrants to vote. With the exception perhaps of some cities that have allowed them to vote only in regional elections where it has to do with the school board and stuff are raising children. And you have to be very careful with that to make certain that you mark which type of voter that is, because there is a lot of possibility of cross-contamination of that vote in statewide or national elections, so you have to be very clear on what type of ballot that person would get.

Sputnik: Why do you think California is the only state that has filed a lawsuit in this matter?

Charlotte Svolos: I think it's because it's large and has a huge economy that is equivalent to a lot of countries and they just have the resources to make that filing. And as well as the number of undocumented immigrants that we have in California.

Sputnik: California is back on coronavirus lockdown. Some experts say: “we have no one to blame but ourselves”. What do you make of that? How is the state dealing with the situation now? What can we expect next?

Charlotte Svolos: It is very different in the northern part of the state, four of my five counties aren’t even on the watch list. And so the swath approach of making regulations for an entire state where conditions are different, specifically in my district, than it is in the rest of the state, is very problematic. And this is one of the things that Republicans tend to believe in local control where that makes more sense to make decisions locally, where conditions may be different. I don't believe our restaurants should be closed. I went to my anniversary dinner last night and I had to cross the state line to go and eat in Oregon because our restaurants were closed on this side of the border even though the conditions are identical on both sides as far as the number of people with infections and hospitalisations. And we have no deaths at all.

Sputnik: How do you assess Trump's chances in the upcoming elections?

Charlotte Svolos: I think states that have traditional mail-in mechanisms won't be too affected by this vote, so like California. It would have gone for the Democrat no matter who. I live in the last red coastal county in California. So our county is going to go for Trump. The rest of the state is going to go for Biden. That's just kind of the reality.

Where it's going to make a difference on those votes is those swing states that may or may not have mechanisms for this mail-in vote. And those places where a fraud occurred, it either occurred because the state doesn't ask for identification and the people who have organised a fraud situation have looked at who doesn't vote and they have simply walked in and voted in that person’s place.

And in the case of a mail-in ballot, that is either going to be better or worse. Right. So you have dense populations in urban areas where five ballots might be mailed because people have moved. And maybe that person decides that they want to cheat, and they are going to return all of those ballots. But you're not going to have as much as that walk-in. So I think it's a mixed bag as far as how much fraud will affect this election, depending on those factors and the more partisan we become I think it really depends on the frustration level of voters, and how much they want to get the economy back together.

© REUTERS / Tom Brenner
US Authorities Fear Ransomware Attacks Might Disrupt November Election
My husband does not like Trump. But he is voting for him this time because of the heinous accusations and campaigns that have been levied by the public. He just feels like he's getting a raw deal and he doesn't see Biden as a great alternative.

I think that it's going to be close. We're going to be waiting at 2 a.m. to find out. Oh, actually longer than that because of the mail-in, so it’s going to take longer. So it won’t be something you find out on Election Day.

Well, it depends. In my county, they'll be able to certify pretty quickly because we already have a high percentage of mail-in votes, because it is rural and our registrar is used to that. So it's not going to take her that long. She'll have normal timelines. And she’s very good about purging our voter rolls and getting people off who have been in our obituaries and taking people off who haven't voted in a while. Our rolls in Del Norte County are really clean because our registrar does a great job about that. That was one of the lawsuits that existed to get people off of the registrar's rolls who shouldn't be there anymore. If the registrar is doing their job that already is the case, but it was not happening in a lot of large counties, like Los Angeles County. The registar was not controlling those rolls.