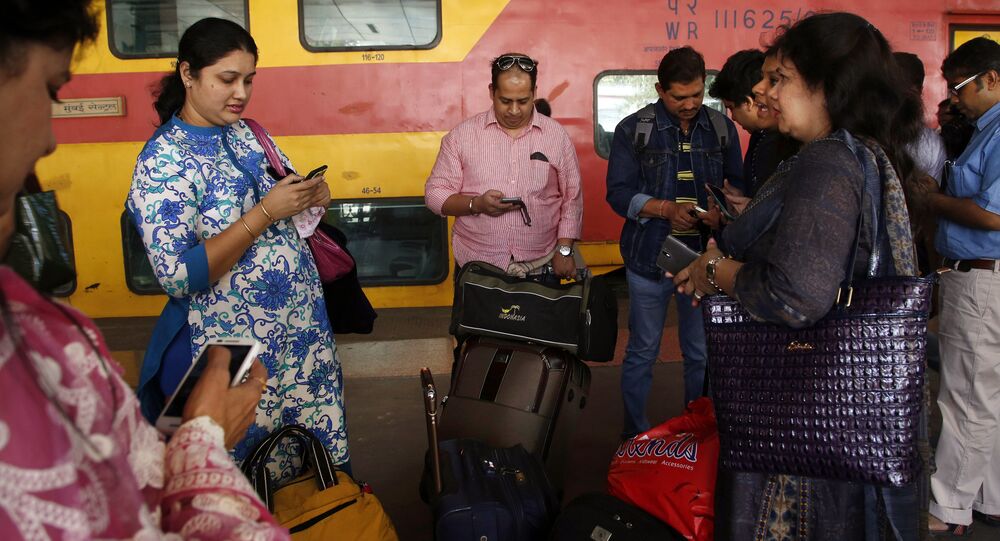 New Delhi (Sputnik): The Covid-19 pandemic has claimed 2,415 lives in India. India is currently under lockdown till 17 May. However, the Indian Ministry of Railways has been operating Covid-19 relief trains for stranded migrant labourers. Limited passenger operations have also been resumed.

Having remained at a standstill for 50 days due to the Covid-19 pandemic, Indian Railways commenced its commercial operation of passenger trains from 12 May. The move came amid the national lockdown's third phase, which is due to last till 17 May and may possibly be extended, as has been hinted by Indian Prime Minister Narendra Modi.

Indian Railways had suspended all passenger operations from 22 March, three days ahead of the country going under national lockdown, as a preventive measure against the contagious Covid-19 virus.

Passenger trains from the Indian capital city of New Delhi have been allowed, connecting 15 major Indian cities like Howrah, Mumbai among others. Prior to this, Indian Railways had also started operating relief trains for stranded migrant labourers.

Former Indian Railway Minister Dinesh Trivedi, however, has expressed a host of concerns, chief among them being the selective restart of passenger trains amid the Covid-19 lockdown. He is presently a parliamentarian from Trinamool Congress (TMC), headed by Mamata Banerjee, the state chief of West Bengal.

Calling the central government's decision to restart trains a "knee-jerk" action, Trivedi told Sputnik that the Modi government's limited discourse with stakeholders is a major problem.

Interestingly, Trivedi’s party leader Mamata Banerjee and Bihar State Chief Nitish Kumar, the two former railway ministers, told the prime minister in a meeting this Monday that the central government should have consulted them before announcing passenger trains. India has been under lockdown to keep the Covid-19 pandemic under control, and now there are differences of opinion between the federal and the state governments on the manner lifting the lockdown.

Sputnik: The central government has announced the commencement of passenger trains up to select destinations amid the ongoing lockdown. How do you view such a decision as a former railway minister?

Dinesh Trivedi: India is behaving like the days of British rule. Everybody wants relaxations. But one must understand that this is a federal country. The lockdown was announced on four hours’ notice without consulting anybody. The government started the trains without consulting anybody. Are we in a democracy? So, my first view is that democracy has come to a halt. It is very unfair that you have slated a meeting with all the chief ministers and suddenly it is announced that the government will start railway operations without any consultation on the matter in the meeting. The government cannot be taking political decisions. At the moment, the decisions need to be taken on the basis of inputs by experts, scientists, doctors, and social scientists, among others.

Sputnik: So, in this fight against Covid-19, are arbitrary decisions being imposed on the people?

Dinesh Trivedi: The day the lockdown was imposed, it was announced that people will stay wherever they are. No provisions for food and shelter of the stranded people and labourers were made. The migrants have been treated worse than slaves. It is a shame on India. Mass exodus of labourers reminds of the partition. This country belongs to them too. The very basis of lockdown was wrong. The manner in which the trains are now being started after almost 50 days is wrong.

Sputnik: Indian Railways is a mammoth organisation. How does one restart it after almost 50 days of standstill? What are the challenges?

Dinesh Trivedi: Indian Railways is the best organisation in the world and is full of very capable people. When the lockdown started in March, I tweeted towards the end of the month that the migrants need to go back home by train. Don’t stop the trains. What did the government do? They said 'no', they will go by bus. I personally feel that the government has not listened to anybody. That said, I have no doubt about the fact that the railways are capable of efficiently restarting their operations. It is capable of doing anything. It is parallel to the Indian army.

Sputnik: It seems the government could not put in place social distancing norms, as tickets have been reserved to full capacity. Do you think norms are being compromised?

Dinesh Trivedi: Are the norms being followed elsewhere? We have witnessed how liquor shops were opened and how people thronged to them. The point is, we should have started thinking and taking steps when the problem was happening in China’s Wuhan. However, we took it lightly.

Sputnik: So what are the challenges going forward for Indian Railways in resuming operations?

Dinesh Trivedi: The railway has no challenges. The railway can perform any job that you want them to perform. The challenges are going to be on the logistics front. For example, today the tickets for the trains can be booked only online, as the booking offices are shut. Now, who can do an online booking? Do you expect a person having INR 200 ($2.8) to own a computer and smartphones to get an online booking done? The middlemen will make money. Decision-makers have not applied their minds at all.

Sputnik: There are reports that even though the government has started trains from the New Delhi railway station, there is no conveyance to reach other railway stations.

Dinesh Trivedi: As I said, these are the logistical challenges. It indicates that no arrangements have been made. This only reveals a lack of coordination between the railways and the state governments from where the trains are originating. Also, there has to be high-level co-ordination between Indian Railways with the states where the trains will be terminating. They also must be ready to receive people and have their safety and health protocols in place.

Sputnik: There has been a huge controversy in that the railway is charging fare during a time of pandemic from stranded labourers for ferrying them in special relief trains to their hometowns. Could that have been avoided?

Dinesh Trivedi: Railway employees have themselves contributed funds worth INR 1.75 billion ($23.3 million) to the PM Cares Fund. In this scenario, the government should have not charged stranded labourers who travelled by the relief trains at all. The government evacuated so many people stranded overseas when the Covid-19 onset began. The government suspended the local area development fund of the members of parliament. That money is lying with the government.