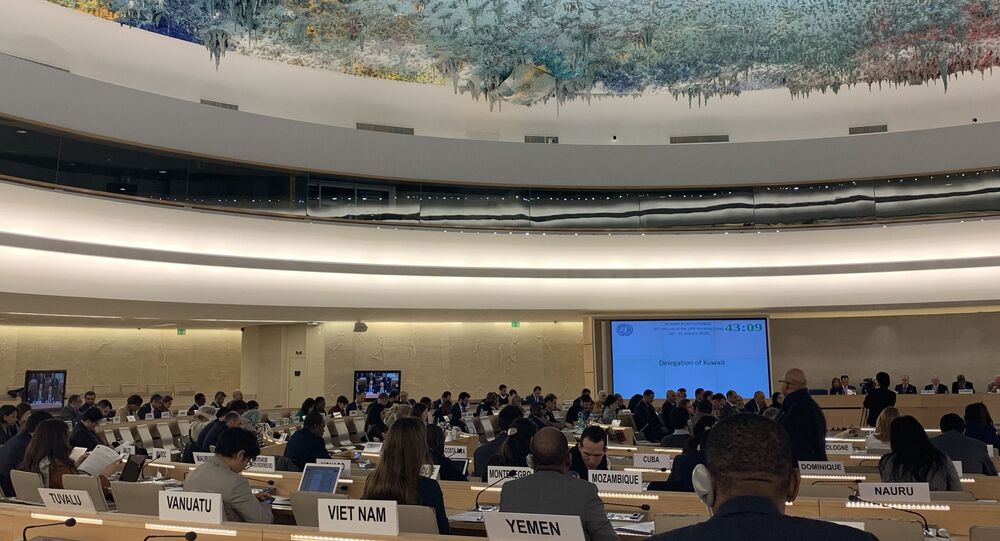 Delegates from the international community have urged a key Gulf nation to review and improve its human rights record following a ruling in November which condemned a prominent Russian businesswoman to 22 years hard labour, sparking criticisms over the country's history of arbitrary detention and persecution of foreign nationals.

Mr Adam Smith-Anthony, Head of the Business & Human Rights practice for Omnia Strategy LLP in London, said on Wednesday there was no credible evidence to support charges against Ms Lazareva and that prosecutors had "failed to make any case against her" that would be accepted by "any objective or properly independent court" to convict her.

Her legal team and colleagues in Kuwait, the US and the UK had "strenuously" maintained that prosecutions against her were "vexatious" and "not grounded in any credible evidence", he said.

Convictions used in the Port Fund case in November were "disappointing and depressing" as her legal team had already "overcome all the principal charges" levelled against her.

Despite this, Ms Lazareva had been convicted on "trumped up charges", he said.

"The principal case against Marsha was that she and her colleague stole $166m USD from [The Port Fund] she managed on behalf of investors, including public bodies."

The court acquitted Ms Lazareva on eight of the ten counts, exonerating her and co-defendant, Saeed Dashti, on all of the principal charges, he explained, adding that courts had also examined all transactions mentioned by the prosecution and found that the paperwork "was in order".

Despite "throwing everything at her" and using two "compromised" witnesses in the trial, prosecutors failed to make their case against her.

But Kuwaiti courts "plucked allegations out of the prosecutors report" at the end of the judgement to side with the witnesses, he said, adding that courts "grasped at straws" to find two convictions, namely the legitimacy of marketing fees, which courts declared fair. She was wrongly convicted in respect of roughly $3.5m, a small sum compared to what the prosecution had claimed.

"This commission is completely standard practice for investment companies globally, and the court's judgement had already recognised that when inspecting other transactions," he said.

The Court even based its conviction on a transfer from investment company KGLI to Mr Dashti that was “unrelated to the Port Fund”, with no evidence linking the payment to the Fund, Mr Smith-Anthony noted.

There was a second conviction in January in the Advisory Services case, which was "theoretically" a retrial. Ms Lazareva had been convicted in May 2018, but the Kuwaiti Court of Appeal overturned that verdict a year later, acknowledging fundamental "due process concerns", namely the fact that Ms Lazareva was blocked from presenting her defence, a critical aspect of any trial that is "essential under international law", he explained.

Ms Lazareva had not been given prior notice of a key hearing ahead of her January conviction, and it "beggars belief" that the Court of Appeal would retry the case only to make the "same fundamental errors", he explained.

"We maintain that those two convictions were a miscarriage of justice, resulting in a lengthy jail term with hard labour and a loss of any faith in Kuwait, despite Marsha being adamant she will clear her name,” Adam Smith-Anthony said.

Kuwait’s Universal Periodic Review (UPR) at the United Nations in Geneva, Switzerland, on 29 January provided an opportunity for numerous civil society and intergovernmental organisations, as well as UN member-states, to assess Kuwait's approach to human rights violations over the last five years, and to comment, question and make recommendations on the Gulf state's focus in the coming years, he said.

Mr Smith-Anthony explained that the UPR process began with Kuwaiti authorities presenting their own national reports, but said he was "struck" by Kuwait’s desire to "pay lip service" to the importance of human rights, and the country’s commitments, treaty obligations and cooperation with UN mechanisms.

Kuwaiti officials referred to laws and guarantees aimed at protecting human rights and maintaining an independent judiciary, but failed to explain routine violations of such laws and protections, he said.

It is "no good" having legal protections if they are not respected and enforced laws, with the Lazareva case evidencing that they were "not worth the paper they're written on", Mr Smith-Anthony explained.

He explained: "For me, this shone through in comments from NGOs and other member-states during the UPR, where Kuwait faced pointed interventions on matters of arbitrary detention. Both the International Association Of Democratic Lawyers (IADL) and No Peace Without Justice (NPWJ) made powerful submissions prior to the hearing, namely on Marsha's case and arbitrary arrest and detention, as well as the impartiality of judges and lawyers.

Numerous states grilled Kuwait on such issues as listed in comments published by her defence team, and a strong contribution was made by the US delegate who called on the country to "address impunity in government corruption cases", he said.

Mr Smith-Anthony explained that Kuwait was also urged to protect and engage with human rights defenders, and the stop the harassment of people who are “holding the country to account” Mr Smith-Anthony said, adding that Marsha's local and international defence teams faced a clear threat from a Kuwaiti government agency last year.

He said: "We were not surprised to see states raising these very important issues. Kuwait must have clearly understood that its protestations on its human rights compliance are being seen as only words, while what the international community wants to see is consistent action.

Pressure was mounting and a "clamour for transparency" is growing internationally, despite Kuwaiti officials hoping that “no one outside of its borders” was paying attention, Mr Smith-Anthony said.

He added that such actions could have serious consequences for the nation’s “standing in the diplomatic and business communities”.

"Marsha’s complaint is currently before the UN Working Group on Arbitrary Detention, who will be considering the case soon. We hope they will be forthright in recognising and condemning Kuwait's mistreatment of Ms Lazareva, and its disregard for its own law and international law."

The UN Special Rapporteur on the Independence of Judges and Lawyers, Mr Diego García-Sayán, is also actively engaged and had raised his concerns about fair trials in Kuwait, placing further impetus for the country to "look into its conduct".

NPWJ and the IADL were also "steadfastly raising [Ms Lazareva's] case in the corridors of the UN", with Amnesty International voicing its own concerns last Thursday at an event in Washington DC, he added.

"Marsha's defence teams, friends and family, hope the increasing scrutiny will encourage Kuwait to acknowledge that there is no justification for this persecution or unfounded allegations. We want to see justice done, meaning clearing Marsha's name, so she can focus on rebuilding her life with her 5-year-old son," he concluded.

Mr Smith-Anthony is the Head of the Business & Human Rights practice at Omnia Strategy and spoke about the developments surrounding her case. He is a prominent and qualified UK solicitor whom has advised state entities in international criminal and humanitarian law and has acted as lead negotiator and infrastructure deals with Eastern European states, among many others.