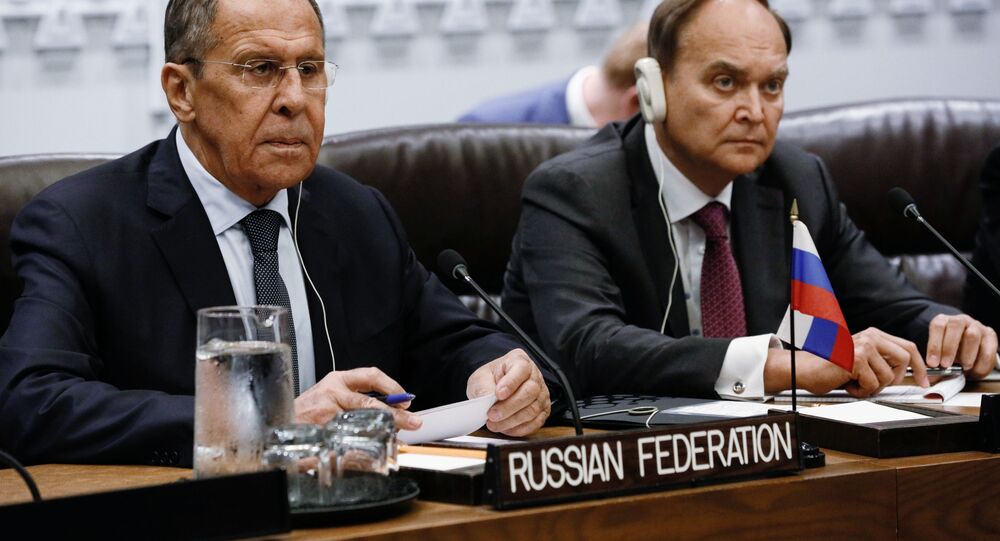 The year 2020 has brought a significant and turbulent flow of events on to the world stage, particularly in the Middle East, from the US assassination of Quds Forces Commander Soleimani to Trump’s 'Deal of the Century', even as Russian diplomats international work promises to be even more intense and challenging.

On Russian Diplomats Day, celebrated annually in the Russian Federation on 10 February, the Russian Ambassador to the United States, Anatoly Antonov, in an interview with Sputnik, voiced Russia’s official position for this year on major issues concerning the bilateral relations between Moscow and Washington.

Sputnik: The Trump administration recently published its so-called 'Deal of the Century', which was negatively perceived by both the Palestinian National Authority and the League of Arab States (LAS). What are the chances that the parties to the Israeli-Palestinian conflict will use at least some of the groundwork from this peace plan to reach an agreement? Will Russia support peace talks based on Trump’s Deal of the Century, with the US leading the process?

Anatoly Antonov: We continue to analyse the details of the plan. We are discussing it with our partners. I would like to note that it is the parties to the conflict themselves who should have a decisive say in the issues of a lasting and fair settlement. After all, it is their future that is at stake. However, the negative reaction of the Palestinians and the LAS raises questions about the viability of the deal.

It should be recalled that all the issues addressed in the document are reflected in the well-known international legal framework of the Middle East Peace Process, which includes resolutions of the UN Security Council and the UN General Assembly, the Madrid Principles and the Arab Peace Initiative. In this respect, it is important that the Quartet of international mediators – Russia, the United States, the UN, and the EU – analyses the current situation.

Unfortunately, this core multilateral mechanism to promote the Israeli-Palestinian Peace Settlement has simply been inactive in recent years. We are ready for constructive collective work to promote a just, sustainable and long-term peace in the region.

Sputnik: Even though the US has twice during the Trump presidency announced a withdrawal of troops from Syria, this promise has not been fulfilled. Washington maintains a military presence in the country under the pretext of protecting oil fields from Daesh* terrorists, which Damascus allegedly cannot contain. Do you think the US will fulfill its promises, and what steps can the Syrian government or Russia take to speed the process of a complete withdrawal of US troops from Syria?

Anatoly Antonov: We were initially skeptical of the Trump administration's plans to withdraw troops from Syria. For many years we have heard of similar Washington “intentions” concerning Afghanistan and Iraq. As you see, nothing changes “in the world” – the Americans still retain their military presence in these countries. In the case of the Syrian Arab Republic, the problem is that the US contingent is present there illegally, without UN Security Council sanction, and without any invitation from the legitimate government.

Not just our country has concerns about the American presence in the Arab republic. For example, it is not clear what the “mission” of the US contingent is when, as the administration claims, the ISIS* forces in Syria have been defeated.

Russia advocates for the restoration of [Syrian] sovereignty and territorial integrity. We expect Washington to act in accordance with international law by transferring areas currently occupied by US troops to the control of legitimate authorities.

Sputnik: The New START (Strategic Arms Reduction Treaty, SNV-III) expires in a year and, although Russia has expressed its willingness to extend it even with changes, the US has shown no interest in discussing its renewal. Is there any hope that Washington will enter into talks about the future of START in 2020, or will Washington unilaterally withdraw from it in the same way it withdrew from the Intermediate-Range Nuclear Forces Treaty (IRNFT) in 2019?

Anatoly Antonov: The question of Washington's intentions regarding the fate of the START Treaty would be more appropriate to address to our American colleagues.

Speaking about the Russian position, Russian President Vladimir Putin made it clear on 5 December 2019, declaring our readiness to immediately extend the treaty without preconditions. The appropriate proposal is under consideration by the American side.

We expect the United States to decide on the START approach in the nearest future, as there is increasingly less time left until the expiration of the treaty in February 2021.

*Daesh (ISIS/ ISIL/Islamic State) is a terrorist group banned in Russia and many other countries.

Lebanese Protest Against 'Deal of the Century' Near US Embassy - Video