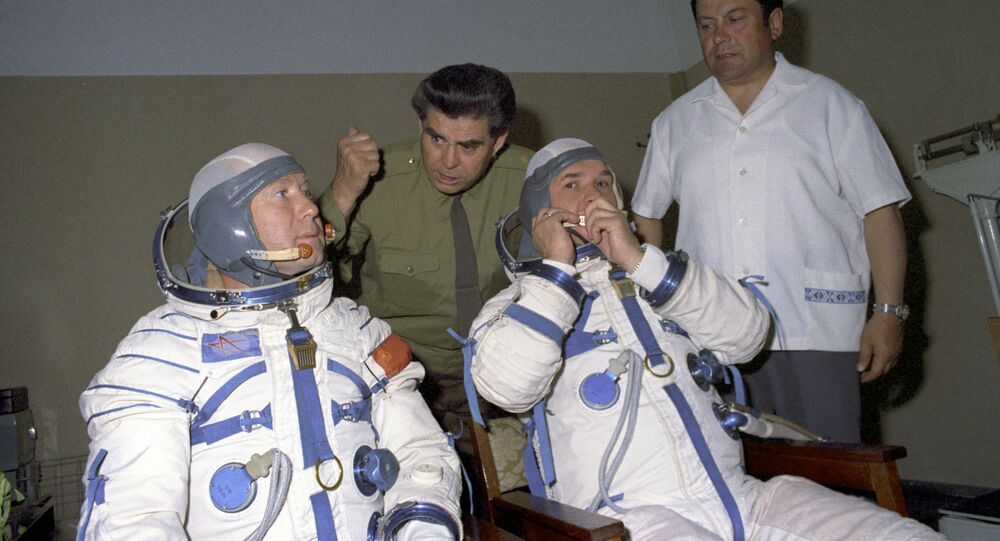 First Human Spacewalker Alexei Leonov: We Have Gone Through 'Fire, Water, Everything'

Alexei Leonov, the first human to conduct a spacewalk and a participant in the milestone joint US-Soviet Union space mission which saw a US Apollo module dock with a USSR Soyuz spacecraft in July 1975, passed away on Friday at the age of 85.

The 11th Soviet cosmonaut, Air Force Major general, a two-time 'Hero of the Soviet Union' who made history with his 12-minute spacewalk on 18 March 1965 as part of the Voskhod 2 mission, leaves behind a towering legacy for subsequent generations and for all those who will lead the mankind in the near future to other, distant worlds.

In 2015, Leonov described in an interview the hardships and ordeals that the first squad of Soviet cosmonauts was exposed to during its relentless and dangerous training sessions, some taking the men to the edge of human capabilities, in the nation's bid to become first in space.

Sputnik: What difficulties did the first cosmonauts encounter?

Alexei Leonov: These 20 people who went into the first cosmonaut squad were selected from 3,000 fighter pilots flying the latest technology aircraft under all conditions.

Over a month, we were faced with executions that were said to be familiar to no one before.

Even though we, as pilots, went through a commission every year and understood what a centrifuge was, but here completely different demands were made that required patience and understanding.

All tests were aimed at revealing the state of human health. For example, a thermal chamber: if a person has already passed all tests, but if there are any hidden defects of the cardiovascular system, then within 2 hours at a temperature of 80 °C something will pop up within the person.

So, these 20 people have gone through fire, water, and all that one could ever imagine, everything.

Then we cancelled many things. We have been through all this. Many capable guys were decommissioned.

There were cases when a person was revealed with something that did not allow flying. Sooner or later he would get himself killed.

Doctors looked over, for example, with everything regarding eyesight – it should have been 100% – later, they had allowed flights with eyeglasses. There were restrictions on the teeth condition: having 7 carious teeth, the person did not pass.

We had to slightly change the age restrictions, it was determined by the state.

In the beginning, we arrived at a bare place where there was no housing, buildings, where we had to train.

We were creating a base on the fly, and not only the premises but also the ideology itself to develop requirements for simulators.

This did not exist in the country. While undergoing general psychological preparation, we were faced with medicine, which we, of course, did not know. But then they realised that it was necessary.

Next, since the Vostok spacecraft had a separate cosmonaut landing plan, it was necessary to be able to eject in a spacesuit at an altitude of 4000 metres. We started by seriously training on the use of parachutes.

During the month of training, we acquired the qualifications of paratrooper instructors.

Sputnik: How did the relations develop within the team? Was there competition?

Alexei Leonov: At the time when there was the first squad – the first team of Gagarin’s recruitment – we did not have these difficulties at all. We had a great relationship; everyone knew who he was following. But when the second squad arrived, there were guys five years older, then squabbles and intrigues began.

The personal climate required a serious attitude, intervention, and putting people in their place, which we generally did successfully.

Sputnik: Why did the choice fall on Gagarin? Why was he chosen to be first?

Alexei Leonov: By this time [Gagarin] had established himself as a full-fledged individual. Studying his life, with him it was somewhat different from the life of other comrades, although, it would seem, we were all standardised, all of the same age. All were cosmonauts of 1934.

Gagarin, his life, starting from early childhood: the German occupation, he went straight to third grade. Despite that he was born in a remote village in the Smolensk region, suddenly, it turned out that he was an educated person, self-educated, he read an amazing amount.

My first meeting with him was on 4 October 1959 in a hospital. I saw him sitting, he was reading Hemingway's book The Old Man and the Sea. It had just appeared in public discussion. A serious man.

I have only heard about it and he is already reading! He finished 6 classes, went to technical training college, completely, excellently, third, fourth, fifth, sixth grades. Realizing that it was very difficult, he went to the Lyubertsy vocational school and began to study as a steelworker.

Can you imagine? – A 12-year-old boy, a steelworker! He kept a very close affection for the family, for his city. He graduated vocational school with honours.

He then goes to an industrial college, graduates with flying colours, simultaneously flying on aeroplanes. He was in practice at the Putilov factory in St. Petersburg. His character, described by a foreman, a man with pre-revolutionary experience, was: “I have seen a man to whom I could pass this factory to which I gave my whole life”.

The boy was 17 years old! Again, he graduates with honours from college and asks to send him to the Arctic Circle. He is flying planes there under all conditions. It is by this time he had established himself as a full-fledged individual.

Sputnik: Do you have personal memories connected with Yuri Gagarin, were you friends with him?

Alexei Leonov: When I was preparing for the flight, he was already a supervisor. And he carefully monitored what I was doing.

I worked very hard, and the doctors told him: “We can ruin this guy. Just look what he does! Two years without vacation!” Yuri: “You know, take a day off. I have friends at the tenth outpost near Vyborg. We’ll go for three or four days”. And I answered him: “Let's go!” And we were given a room at the border outpost, we both lived together, went fishing. There was no one else around.

When we returned, I continued. Only then I realised how he protected me. The summer of 1964, I am again without any vacation, I fly a lot to zero gravity, do training in a pressure chamber, and suddenly he tells me: “You know, let's take them, I take Valya, you take Sveta, and we’ll go for a week to the Moscow reservoir on my boat. We’ll chill out a little bit”.

He took responsibility, removed me from the regime, realising that I could no longer withstand it somewhere because the day before my stand-in had an “emergency landing” after a small heart attack, a microinfarction.

I remember how I said some awful things to Viktor Gorbatko: it was connected with the fact that the Germans occupied the Kuban... And Vitya was so upset. Yura said to me: “Are you crazy or something?

Well, tell me then that I was under the heel of the Germans as well! Half of the country, the entire European part was under them. 'What accusations?!' I told him: 'I was just joking!' And he replied: 'You can’t joke with such things, you have made your friend upset.'

If you gave him a proper education, then we would hear his name among the names of outstanding scientists of our country.

He studied at the academy, I was with him. He studied very well despite the breaks. He came, took notes from me, copied, graduated with honours, received a gold medal, and was enrolled in the postgraduate higher military training course in the Academy.

I was not admitted; I later enrolled in the postgraduate military academy. But he was admitted because he received a gold medal, I did not receive it, although I had the opportunity to receive it.

A lot of memories: we never gathered at home so much with anyone as we gathered at his place for any occasion.

Kobzon came to him – he invited all his comrades, they were on the hunt, they shot something there – he immediately comes home from hunting, Valentina Ivanovna is cooking and we are all there at his place. Although having two children, this is very troublesome. But this was his attitude towards people: he understood that he was a leader, people should live around him. This is a special category of selected people, they must be protected.

Sputnik: What lessons did you take away from being part of the first Soviet Union Cosmonaut Team?

Alexei Leonov: After the tragic death of Yuri Gagarin, I was actually appointed to his post - deputy head of space flight training programme.

And after the accident, I worked in his place for 20 years. I have a regiment, a regiment is like an air corps — the L-39 squadron, the MiG-21 squadron, for 20 years there has not been a single flight accident. This is the main characteristic of the work of the superior in this post. I was also a squad leader.

Every year on New Year's Eve, by my order, I gather everyone with their families and children, just as Yuri did.

And every year we get together, enjoy life, congratulate each other. We came up with our scenario for the New Year’s events and a film called “Cosmonauts without masks or some new year” was made. This is a whole story. Now there are 4 people left but everyone remembers those events: trips to historical places, exhibitions, the theatre.

Most importantly, I, like Yuri, was constantly looking for opportunities to gather people, praise them, to think about their families and children; whether there is a place for children in the kindergarten, how they study at school, about the health of their parents.

He (Gagarin) knew all of that. And to my honour, I continued his work.