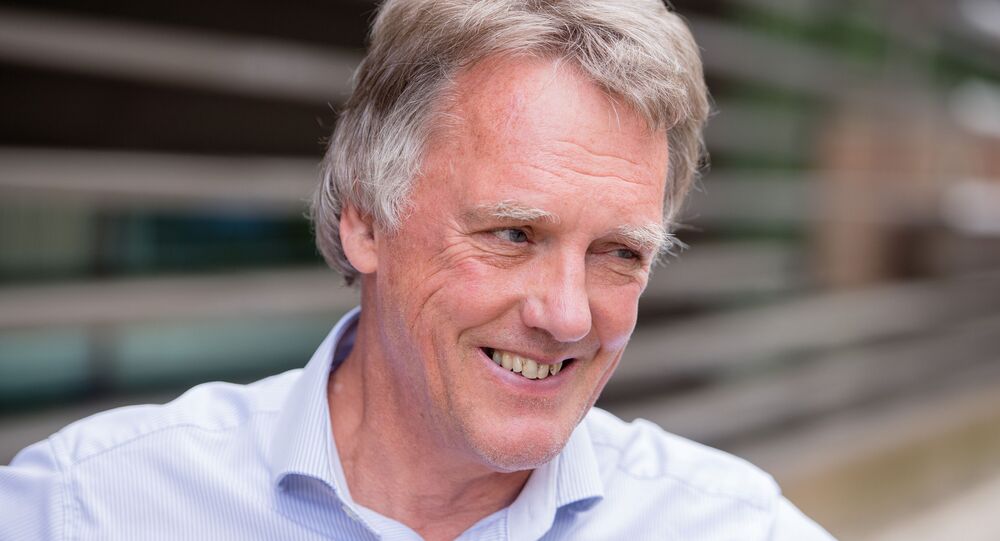 The 2019 Nobel Prize in Physiology or Medicine was awarded to William G. Kaelin Jr, Sir Peter J. Ratcliffe and Gregg L. Semenza for their research on the reaction of cells to oxygen availability, with the official award ceremony taking place on 10 October.

The joint research has provided new insights into the treatment of diseases such as anaemia and cancer, among others.

Sir Peter Ratcliffe: To be honest. I don't yet know. Our discoveries of the way the body's cells sends oxygen and oxygen levels are important for most of what the body does to make energy, to move, to grow, to work in almost every way. And that's what we found out a means by which cells monitor oxygen levels and adjust their physiology in order to preserve the right levels of oxygen. That's a basic science discovery. And I guess the satisfying thing for us is that it's true and it'll continue to be true for all time.

It's fact about how the human body works simply that. Now you ask what the implications of human suffering and disease and so on and so forth. Most human diseases from heart disease to anaemia, to cancer are complicated by low oxygen levels. So in part, the discovery can explain some aspects of how disease works and progresses. And that may be a good thing also to know but the implication of your question is what might be done about it. And this is a bit where there's still a little bit of a journey to go. It is possible to use medicines to turn the system up or to turn it down.

So in many types of disease there isn't enough oxygen and it would be a good idea to turn the system up to try to make the cells adapt to that or to try and bring more oxygen to the cells or adapt the system in that way such a disease would be anaemia particularly that which is caused by lack of a risk of Erythropoietin which is where the work started. What regulates a risk Erythropoietin. Now there are drugs and we'll be hearing the results of the major U.S. and European trials later this year and next year.

The trials are looking pretty good and positive in China and people being treated with these drugs in China to turn the system up and that is to correct anaemia and instead of using erythropoietin which requires injection is rather expensive and has some potentially some other disadvantages and this offers a natural way to induce EPO which we hope which will be a better way to do it than giving EPO (erythropoietin) itself so that the knowledge on that or really accumulate over and probably over the next five years will be a good times out of five years time. Well you know just how safe this is just how effective it is and whether it is really a new medicine it's going to take over in that area of medicine. So that's one thing.

And of course, it is possible that these medicines that improve the blood this oxygen supply may do other things that may help people with heart attacks with circulatory problems and all sorts of diseases for which there is currently no really effective treatment at all these so-called areas of unmet medical need. But that's for another thing that's going to require trials of drugs in different circumstances. So and so forth. The second type of drug second class are those that. Turn the system down there.

These are being developed for anti-cancer treatment where the cancer likes to co-opt an oxygen supply in order to grow. So it is possible to inhibit the cancer by turning this system down and getting the drugs that are being given to patients in trials so looking pretty promising. And it will be it is currently suspicion of some excitement to know whether they really will over time deliver an important advantage to cancer in a safe and effective way for patients. It looks pretty good at the moment to be honest such as I've seen the data it looks strong that you never know with drug development. It's an uncertain thing.

So what science does it just put knowledge out there and people can use it often and in unexpected ways for the human guy. We hope that this will be pretty direct but we don't absolutely know the amount before nineteen ninety.

Sputnik: Before 1990 you were focused on nephrology, but then you retrained in molecular biology and founded a new laboratory working on hypoxia biology in cancer and circulatory diseases. What was the turning point in your life? Why did you change the focus of your research?

Sir Peter Ratcliffe: Well, actually I was doing clinical medicine. And at the end of 1988 actually it was, I decided, I wanted to spend a bit of time in research. I knew a little bit about the kidney. I knew that kidney made protein and I knew the kidney had a special type of circulation and I wanted to understand how this protein production was regulated by the kidneys.

So I when I finished my clinical training rather than go into full-time practice I set up this laboratory.

Sputnik: In which direction do you plan to move forward with your research? What is important for you to concentrate on now?

Sir Peter Ratcliffe: Well two things really: we're working on different types of system by which the cells sense oxygen. We have this one which is very important and prevalent in so many things. It works on a timescale from hours to days and we're interested in whether there are other things particularly ones that were faster or used perhaps more slowly than this.

Secondly, we have a major interest in how the system works in cancer which is a little bit more complicated than the simple model I've set of just switching it on and helping the cancer grow that a cancer of a complicated disease and it mixes up these pathways in a very complicated way and where we're trying to unravel after and particularly how the early cancer develops.

Sputnik: One question that is very interesting for most people is - of course, what will you spend the cash prize of nine million kronor (£738,000) on?

Sir Peter Ratcliffe: I know that may be interesting but that I can't answer that over the telephone or with my friends, families and people who contributed. But we will do something fun. It won't be used to pay off a mortgage or anything. We will do something that's happy and fun.