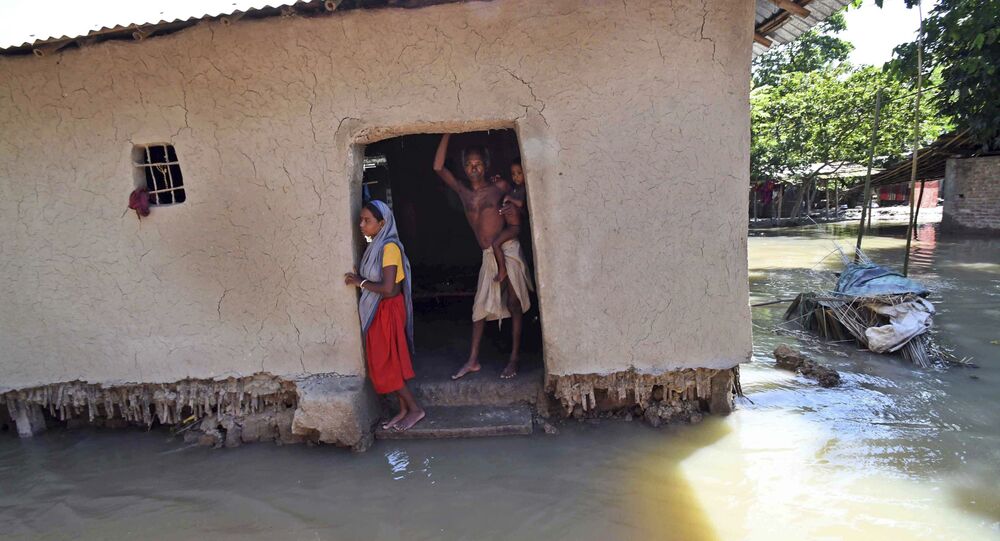 New Delhi (Sputnik): The flood situation across most of India continues to be critical, but particularly so in the eastern state of Bihar, which is facing a possible medical emergency, the country’s National Disaster Response Force (NDRF) chief said on Monday.

In Bihar, 13 of the total 38 districts are floods-ravaged and have left at least 29 people dead since Friday. The state’s capital city of Patna remains submerged in spite of there being less rain today, NDRF’s Director-General S.N. Pradhan said in an interview with Sputnik. Excerpts:

Sputnik: India is facing a grim and challenging situation with floods ravaging 20 out 29 states. Nine states have been declared critical. How is the NDRF responding to this natural calamity?

S.N. Pradhan: For the NDRF, the current problem area is Bihar. A cloud burst over the state has caused an unseasonal pattern of rain. In terms of data, the state has received 300 centimetres of rain. In and around Patna (Bihar’s capital city), the flood situation has aggravated because waters have gathered in low-lying areas. The rain has stopped, but work for the NDRF is cut out for the next three days.

Sputnik: How many people have been affected and how successful have been the relief and evacuation processes?

S.N. Pradhan: Over the last 72 hours, the rescue and the relief work has become more aggressive. We estimate that at least 200,000 to 300,000 people have been badly affected by the floods. So far, we’ve been able to evacuate around 20,000 people. Some of the more affected are still stuck and have virtually no access to essential supplies. The NDRF has deployed more than 40 boats in Patna to get the people out of the flood-hit areas.

Sputnik: In this ongoing relief and evacuation exercise what are the major concerns and impediments that the NDRF is facing?

S.N. Pradhan: There are several impediments. For instance, rain and river waters have entered the city’s sewerage system; open drains are severely blocked and overflowing, leading to mixing with drinking water supply sources. There is virtually no access to drinking water. Our priorities are food and potable water, huge volumes are required. We are anticipating increased frustration from the public.

Sputnik: How many NDRF teams are currently deployed in Patna city for flood relief and rehabilitation?

S.N. Pradhan: There are five full teams plus 40 boats. Three more teams will be deployed by Monday evening. Many people are leaving for their native villages and districts and in that context that will loosen the pressure on minute-to-minute rescue work. The situation before us in Patna is acute.  Therefore, it can be a bit tricky to pull out our personnel and deploy them elsewhere in the state. As you are aware, 13 districts are affected and apart from Patna, there are four other areas in a critical state – Bhagalpur, Buxar, Vaishali and Munger.

Sputnik: What about NDRF deployment in other Indian states which have also been ravaged by floods? Why there are more deaths in Uttar Pradesh than in Bihar?

S.N. Pradhan: We have a total of 122 NDRF teams deployed in 22 of the 29 Indian states. You made a mention of Uttar Pradesh… there the NDRF has seven teams. On the death toll being more in Uttar Pradesh than in Bihar, the data that we have with us suggests multiple disparate and stray incidents of drowning. But coming back to Bihar, the situation is bad. We anticipate a medical emergency sooner than later.

Sputnik: Floods are annual phenomena in India. If we were to ask you to identify key reasons for them, how would you respond?

S.N. Pradhan: By and large deployment of NDRF personnel is as per standard operating procedure. As regards factors responsible, one of the reasons is water overflows in catchment areas (hydrological unit).

Another factor is the need to release water from dams. For example, Maharashtra, it has the maximum number of dams in the country and when these dams get full, the concerned authorities have to release the water.

The third factor, at least for this year has been the pattern of rainfall. It has been unpredictable. We are facing an extended cloud burst situation i.e. what can usually take place in 10 days is now taking place in one day, which is alarming, very hard to prepare for or anticipate.

Sputnik: Would it be correct to say that global climate change is a contributor to this natural calamity?

S.N. Pradhan: Yes, of course, climate change is staring at us upfront. There are very strong symptoms of that, but at the same time, it is unwise to hazard a guess about when and where a natural calamity is going to occur.

This year for example, if we go by weather bureau predictions, the monsoon season should have ended by 10 September. Today it is 30 September and we are still experiencing heavy rainfall.

We should be preparing for countering the cyclone season, but what we are seeing is that monsoon season is dovetailing into the cyclone season, which creates more problems, more complications. Not easy to deal with both water and wind-related calamities simultaneously.

Sputnik: Is there a positive that we can take from what is a depressing situation?

S.N. Pradhan: There is room for improvement, we are moving in the right direction. Capacity building for disaster management is a priority that states should look into. Calibrating this well will ensure minimum damage, better responses. Management of disasters has improved. State disaster response forces should be made more robust.