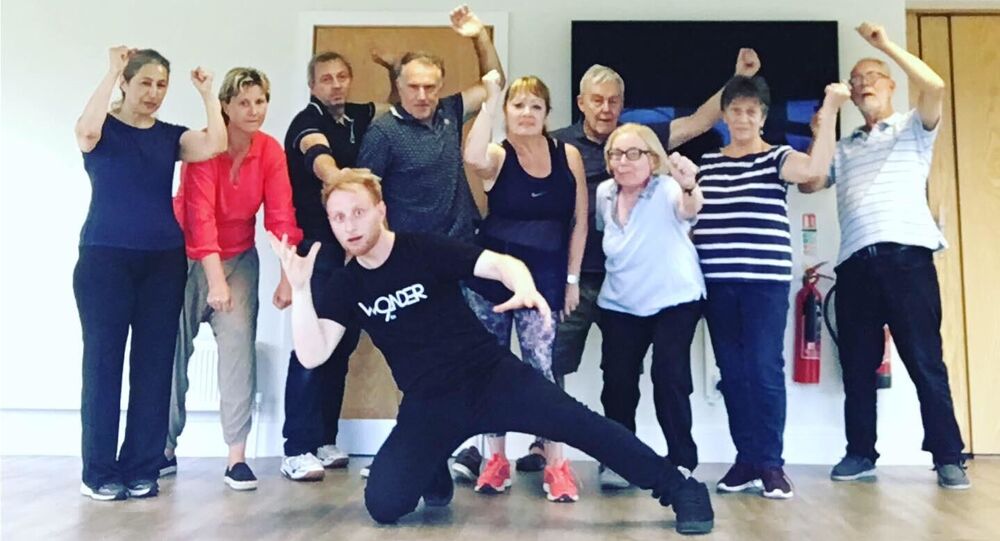 For people suffering from Parkinson’s disease daily activities are a real challenge. If the Parkinsonians could regain control of their bodies, they would forget their illness and enjoy themselves. This is now possible thanks to popping dance classes, a wonderful project created by a young Italian.

Popping is a hip-hop style of dance born in the 1970s and based on instant muscle contraction and release, which results in dancers moving jerkily. Dance teacher Simone Sistarelli has created a project incredible in its simplicity: Popping for Parkinson’s. The project was born in London in 2015; it consists of free popping classes for people with Parkinson’s disease. During these classes, the sick learn to socialize in dance steps.

From London Popping for Parkinson’s came to Italy, free classes are offered in Turin and Brescia; the demand is really high, and in order to be able to go ahead with the project fundraising was launched. How does popping help people with Parkinson’s control their bodies? Sputnik has discussed this with the project’s creator Simone Sistarelli.

Sputnik: Simone, what is popping?

Simone Sistarelli: It’s a dance that was born in the late 1970s in California; it’s a dance that Michael Jackson studied, it is, so to speak, the famous “robot dance". When we see people dancing jerkily, it often means the're using the popping technique. The dance is based on instant muscle contraction and release: this is how an electric shock effect is created. This style became famous in the 1980s thanks to many movies and music videos.

Sputnik: How did you learn this style?

Sputnik: How did you come up with the idea of ​​teaching popping to Parkinson’s patients?

Simone Sistarelli: There are several reasons why this project was born. In the beginning my thought was that as popping dancers we “tremble to music” and people with Parkinson “tremble without music". So, I thought that if these people could tune their tremor to music, they would do great. This initial idea gave me an input to create the project.

Remember that people with Parkinson’s have a social stigma because there is not much knowledge of the disease and they end up being socially isolated. This dance is fun and engaging; thanks to Michael Jackson, everyone knows about it.

Hip-Hop culture teaches us to use everything we have in our favour. Hip-Hop started with Bronx children devastated by poverty and crime; instead of giving up, they started singing about this misery, and turning their misfortune into a material that then turned out to be quite popular and conquered the whole world.

So, the basic idea is to transform weakness into power, and that’s what happens with the Parkinsonians thanks to popping which is based precisely on tremor. We transform negativity into positivity thanks to the language of dance.

Sputnik: What results have people with Parkinson’s shown with this dance?

Simone Sistarelli: The benefits are many. First of all, there’s the transformation from patient to student, these people are considered by themselves and by others as patients who take pills and medicines all day long. And during these classes Parkinson’s becomes just the excuse to come; at these classes they are not patients anymore, they are students who rediscover their humanity. These popping classes create an atmosphere for communication and involvement in society.

On a psychological level, these people discover the desire to learn something new and find control of their body and therefore of their life. I’m trying to measure these benefits in a more scientific manner; I do some research in collaboration with the University of Hertfordshire in England, and within a couple of years I hope to have the research on the subject published.

All the results are measurable, both on my regular students and on people who may come only once when I came to their city. It’s a simple but incredibly effective transformation.

Sputnik: Do the classes have a fee?

Simone Sistarelli: All classes are free because we don’t want to profit from disability. We would like the project to be funded. I continue to teach at a dance school; and I didn’t create this project to get money from Parkinson’s patients.

Sputnik: The project was born in London, but you travel the world. Has Popping for Parkinson’s come to Italy?

Simone Sistarelli: The project was born in London because I graduated from the conservatory in 2015 and stayed there. About three years later we managed to launch a weekly course in Turin; that was last year. The demand was so high that we had to launch two courses instead of one! We currently have our London classes funded by the Mayor of London. We then have a weekly course with two classes in Turin, which is also free; but we had to launch a fundraising campaign to be able to continue with the course. Next week we are opening a new free weekly course in the province of Bergamo.

Last week, I gave several classes in New York; I travel a lot around the UK and I have been to Berlin several times. I try to travel as much as possible and one day I’d like to have Popping for Parkinson’s lessons as a global brand with courses and classes in many cities, this is my final goal.