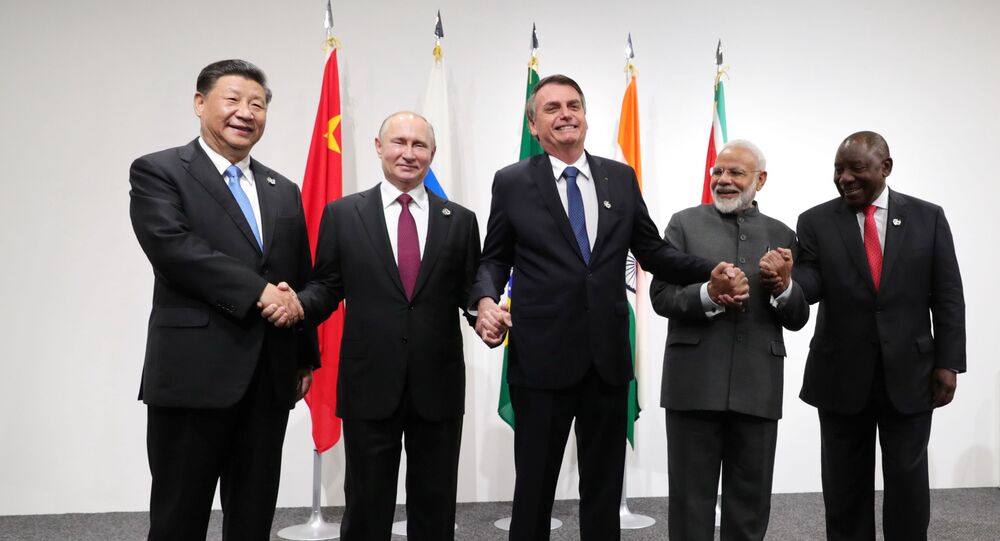 BRICS International Forum President Purnima Anand believes that the main force driving the BRICS nations is cooperation between Russia, India, and China, with Russia being the largest democratic country in the world and India the most populous.

Purnima Anand attended the fifth Eastern Economic Forum, held in Russia’s Pacific port city Vladivostok this week, where she spoke of the importance of the BRICS Forum and the activities of Indo-Russian Youth Clubs that are aimed at getting the younger generation in both countries to cooperate.

Sputnik: BRICS International Forum is a community initiative; it's a people-to-people initiative.  What is its role in the region? How important it is this for all the participants?

Purnima Anand: BRICS International Forum is a new perspective, for work on a bigger scale between Russia and India. It gives a good platform to elaborate Indian-Russian relations. I think in the whole world, economic changes are happening very widely and in this context, India-Russia is very important, as during this Eastern Economic Forum we can see how important India-Russia relations are.

And in the Eastern Economic Forum, we are seeing that on the Asian side, President Vladimir Putin is trying to develop very big opportunities, which will [benefit] the new silk route, and [provide] new opportunities for enterprises from Asian countries within Russia. So I feel that the Eastern Economic Forum and BRICS have a very large [framework] to work with in Asia. In Asia, three countries are very important: Japan, India, and China, so if these three countries work together with Russia, then BRICS will get its real meaning.

Sputnik: What is being done by your organisation on the level of people's democracy? And what can we expect in the coming years, what kind of events?

Purnima Anand: I’ve been working with Russia for the last 25 years, and after 1992 when the USSR collapsed, a little freeze was observed in India-Russia relations. So we were working together and we were having this big dream that good times will return. And in this forum, we can see it, how the Indian government is ready for all the MoUs (memoranda of understanding) and agreements.

BRICS International Forum is continuously working with youth because it was our hope and faith that youth should know how Russia has changed, and how India-Russia relations are important. During the past 72 years of our diplomatic relations, we have seen ups and downs many times, Russia and India as well, and sometimes India would turn towards the West due to multiple country relations, to balance the situation, and from time to time we observed that when changes happen, the next generation should always be ready to understand the realities.

So BRICS International Forum and the International Federation of Indo-Russian Youth Clubs, in collaboration with the Russian Centre of Science and Culture and the Russian Embassy in India, continuously tries to connect with the young people of India.  We’re trying to divert their interest towards Russia and the BRICS countries from the West.

Western influence is more [prevalent] in Indian society due to [the English] language, business, and dollar hegemony, but now Russia is changing and attracting a number of young people due to their higher education and entrepreneurial skills, so I hope we succeed.

Sputnik: You mentioned Western influence and you mentioned mostly Russia-India relations but BRICS also includes Brazil, South Africa and China as members. We know that India, China, and Russia are kind of staying close together, while the other BRICS members are possibly having doubts about the future of the organisation.

We know that Brazil is currently experiencing a lot of Western influence with its current government. Is there a future for the BRICS group and how are you planning to work without countries, such as Brazil and South Africa, for instance?

Purnima Anand: Recently I visited Johannesburg during elections, I’m an international observer also, and Russia has started new political lobbies in African countries, so we are into that, with different political observers from a group of 25 countries. We are observing that people are interested in the BRICS and political changes happen everywhere.

I suppose the current president is with the influence of BRICS. The previous president of Brazil was also very interested in BRICS and she worked so hard, but the current president is under the influence of the Western economic system. He directly says:  the West is giving us economic support, so what can BRICS give us? So according to that, he wants to balance the situation in his country. Every leader has his or her own concept and the basis of their [plans].

I think that BRICS has its own trend because, as you said, Brazil, Russia, India, China, and South Africa. If you connect India, China and Russia, Russia has the largest geographical area, so it means Russia is the largest democracy in the world. India and China have the largest populations in the world. India is the largest democracy in terms of population, so these two leaders are enough in the BRICS. China is also totally in the BRICS format; you can say, China is completely with Russia. So Russia has two very good partners in Asia to compete with the West.

Sputnik: So it’s going to influence the balance within BRICS?

Purnima Anand: We can hope so because the dollar is fluctuating every day. Now leadership in the BRICS region is more stable when compared to the West. The Parliamentary Assembly of the Council of Europe has voted to restore Russia’s voting rights, which shows the strength of Russia and the power of President Vladimir Putin in Europe.

So sanctions did not work, they need Russia. I think in this world we need balance and peaceful cooperation, so when countries have more good people, young people, and economic ties to other countries, their economies will succeed.