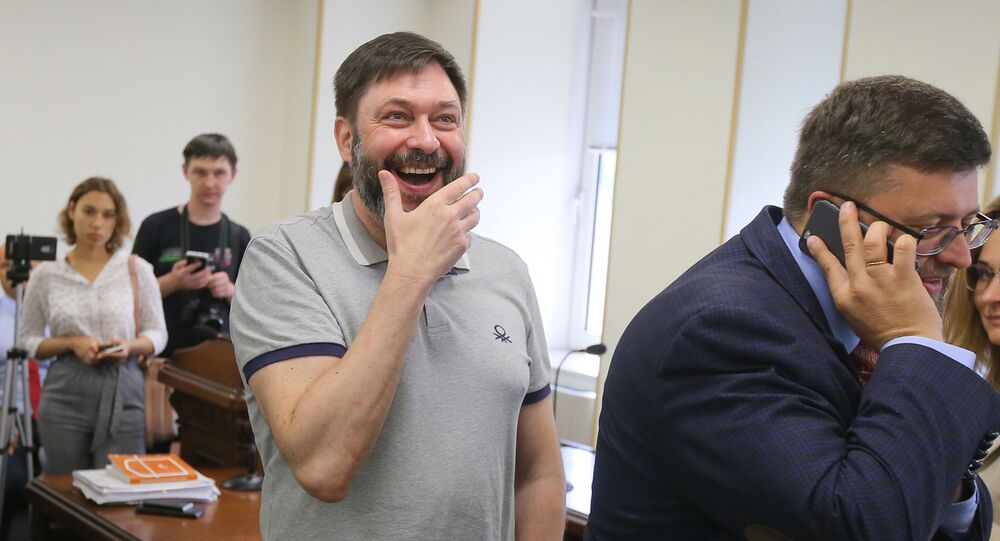 ‘My Immediate Goal Is to Prove My Innocence’: Kirill Vyshinsky’s Interview Upon Release From Ukrainian Custody

RIA Novosti Ukraine’s Editor-in-Chief Kirill Vyshinsky, who was arrested in Kiev in May 2018 on charges of treason, was released from custody today on a personal guarantee basis after more than 400 days in jail; however, the litigation process against the journalist continues.

Kirill Vyshinsky, the head of Ukraine's RIA Novosti news portal, was released from custody on Wednesday, 28 August, but the litigation process on the charges of treason, support for the self-proclaimed republics in Eastern Ukraine, and illegal possession of a firearm against Vyshinsky continues, with a new court meeting currently being set for 16 September.

Vyshinsky, who was facing 15 years in prison, was released under a personal guarantee, but he is still obliged to appear in court and give testimony to investigators if necessary.

In his first interview with RIA Novosti after being released, the journalist discussed possible reasons for the change of his detention measures and how it could be related to the departure of Petro Poroshenko from the presidency this year.

Sputnik: Kirill, we congratulate you upon your release from custody. What are your nearest plans?

Kirill Vyshinsky: The plans are simple, they are related to the ongoing lawsuit. I spoke about it earlier and confirmed in the court today. My immediate goal is to defend my good name and to prove my innocence in court. This is the main plan for the nearest future.

It will take some time, a day, two, I’ll get used to the freedom a little. I will breathe with both lungs, and then, for sure, I will have some other plans. Of course, I hope to see my father in the near future. He is in Ukraine.

Sputnik: So, on 16 September you will take part in the court session?

Kirill Vyshinsky: Yes. Now there is such a date – 16 September.

Sputnik: Your release from custody has coincided with preparation for an exchange of detainees, which has been discussed a lot now. Is this a coincidence or preparation for your participation in the exchange?

Kirill Vyshinsky: I have always said that “exchange” is among the words that were pronounced even before I came under suspicion of committing certain crimes. This is a phrase spoken by politicians from the circle of [Petro] Poroshenko back in May last year. Therefore, I, as a person who considers himself completely innocent, and my guilt has not been proven anywhere, by any court - therefore, I am not talking about an exchange. I want the main thing - that the court will change my measure of restraint, so that I will be free. I want to continue proving my innocence in court. “Exchange” is not something that I have ever striven for. This is the insane project that the former administration of President Poroshenko imposed, at least in regards to me, by the old political power.

I am not aware of any political or non-political details. I just know that people with the same charges who were sitting with me in neighbouring buildings and cells, they have been free for more than a month. This is due to the abolition of the lack of alternative measures of restraints for a number of [criminal code] articles. That is, people with the same charges as mine were released earlier than me, under a different form of commitment.

That’s why I considered it to be fair for me to change the measure of restraint in the same way as happened with other people. I wanted a fair court decision and I got it.

Sputnik: Why now? After all, appeals to your arrest [measure] have been made by your lawyer many times.

Kirill Vyshinsky: I do not want to speculate about any versions and conspiracies. I think that changes in my daily fate have occurred, of course, also due to the fact that the pressure on the courts has ceased. A man who wanted to make my personal fate a part of his political PR has left power.

Kirill Vyshinsky: Yes. I don’t want to construct any versions now - I’m not aware of anything in this regard. I just understand that if Poroshenko had remained president, I would not receive such a court decision today.

Sputnik: Do you retain Ukrainian citizenship?

Kirill Vyshinsky: Yes. I remain a citizen of Ukraine.

Sputnik: Thank you for the interview, and congratulations again.

Kirill Vyshinsky: Thank you very much, kind regards to my colleagues and thanks for the support.