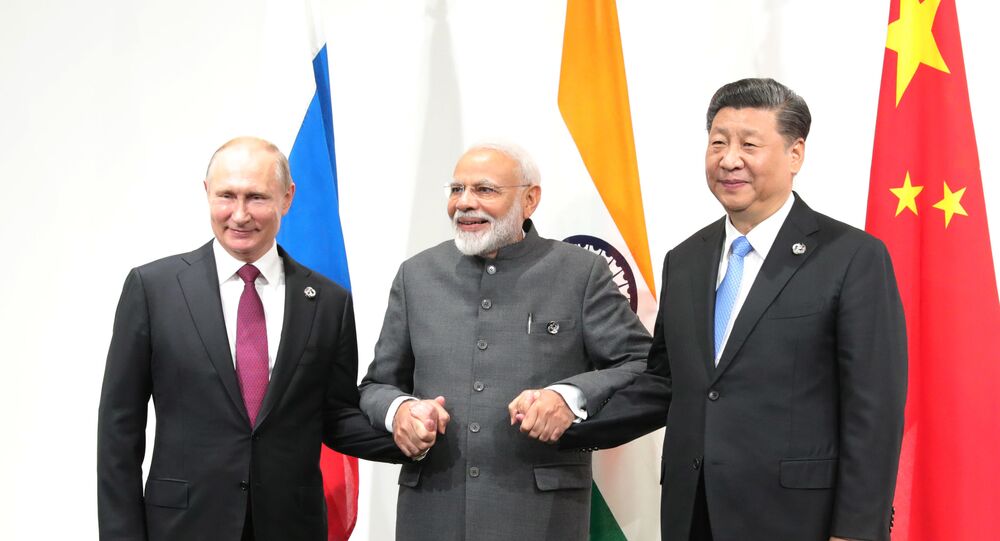 The leaders of Russia, India and China have been meeting at the trilateral level since the 1990s. In November 2018, Indian Prime Minister Narendra Modi, Russian President Vladimir Putin, and Chinese President Xi Jinping met in Argentina’s capital Buenos Aires where they deliberated on several issues, including the need to reshape the world order.

New Delhi (Sputnik): The heads of state of Russia, India and China (RIC) met informally on the sidelines of the G20 Summit in Osaka, Japan, on Friday to discuss several issues of mutual interest and concern, including counter-terrorism, reformed multilateralism and climate change.

Indian Prime Minister Modi, who hosted Russian President Putin and Chinese President Xi, said in his opening remarks that the three countries in the Eurasian region were fast becoming the world's leading economies, and therefore, the exchange of views among their leaders was increasingly having an important bearing on the global economic, political and security situation.

Prime Minister Modi also recalled the positive outcomes of the group’s trilateral foreign ministers' meeting in China in February and said these discussions need to be taken forward and implemented.

Sputnik spoke with former Indian diplomat and ambassador M.K. Bhadrakumar, who opined that the Russia-India-China engagement can be a factor of stability not only for Asia but for the world as a whole.

Sputnik: What do you make of India’s bilateral engagement with Russia and China on the sidelines of the G20 summit?

Ambassador M.K. Bhadrakumar: There is a Russia, India and China interaction taking place in Osaka [Japan] on the sidelines of the G20. That again is very important and significant. To my mind, there are tentative signs of new thinking on foreign policy which I obviously welcome.

Sputnik: Would you agree that trilateral engagement between these three countries is increasingly having an impact on the current world order?

Ambassador M.K. Bhadrakumar:  Russia, China, and India – if they stand together in the Asian region - it is a very powerful voice. We can play a leadership role in the market and the world order today and also influence the democratisation of the old world order.

Ambassador M.K. Bhadrakumar: India has a very long, strong and strategic partnership with Russia. Russia-China relations are also at their highest level. India-China relations are showing signs of improving steadily. So, I think, this triangle can be a factor of stability not only for the Asian region but also in the world order, in the international system.

The fact of the matter is that strategic communication between India and China is significant. To my mind, it is a positive development and, since Wuhan [Summit], we have seen a new momentum and new climate in the relationship. Carrying it forward, interactions at the highest levels are definitely very helpful.

Sputnik: What should India be focusing on at the G20 Summit?

Ambassador M.K. Bhadrakumar: India should join hands with countries which are expressing great disquiet over the pressures that are building upon the multilateral trading system. India is a stakeholder and the kind of protectionism that is building up as a threat to world trade, that’s a major issue for us. ASEAN countries which met in Thailand recently also voiced similar concerns. China, India, Russia, ASEAN countries, in the Asian region, there is a very profound sense of disquiet over this.

Sputnik: It is being reported that G20 leaders are likely to have differences over the wording of the Summit Communiqué on combating climate change. Is this so?

Ambassador M.K. Bhadrakumar: On this issue of climate change, I will only say that the United States’ unilateral decision to exit from the 2015 Paris [Climate Change] Accord... this whole process of building upon countering climate change challenges, that has suffered a setback. International opinion is very clear on that. India has identified this and I am sure it will take it up.

Sputnik: Will terrorism be one of the focus areas at the G20 Summit?

Ambassador M.K. Bhadrakumar: I don’t think so. The G20 has a history. The G20 was created in the present context in terms of the problems accumulating in the world economy, sluggish growth and all that; the financial crisis of the last, previous decade and so on. It is not so much about terrorism, but definitely, India has special concerns about it because terrorism affects our national interests in a broad way. So we will certainly articulate our concerns. This summit used to be a symbolic event, but it is now assuming greater importance than before.

The views and opinions expressed in this article are those of the speaker and do not necessarily reflect Sputnik’s position.