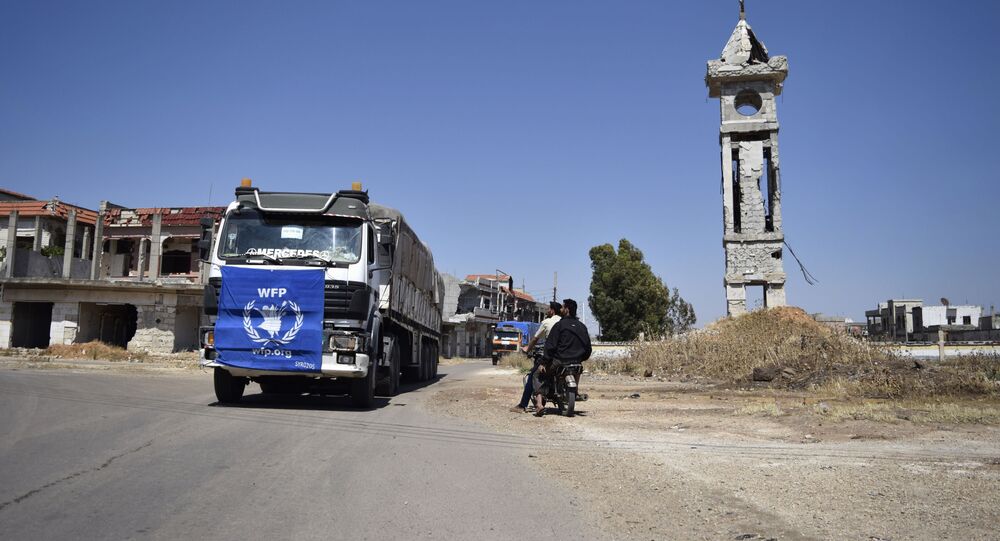 World Food Programme Chief: 'Not Our Role to Take Sides in Political Controversies'

David Beasley, the executive director of the World Food Programme (WFP), spoke about the assistance to the people of crisis-hit Venezuela and Syria, as well as the organisation’s work in North Korea, in an interview with Sputnik.

Sputnik: The Democratic People’s Republic of Korea continues to face a wide range of food and nutrition challenges. A recent UN assessment says that 10 million people in North Korea face imminent food shortages. What is the WFP doing in this country?

© Sputnik / Sergey Guneev
Maduro Says Sabotage Prevents Ships With Gasoline, Food From Reaching Venezuela
David Beasley: Right now, we feed about 770,000 people across nine provinces. This includes some of the most vulnerable children under five, as well as pregnant and breastfeeding women. Nutritious cereal and biscuits fortified with micronutrients, fats and proteins crucial for healthy growth are being provided through nurseries, hospitals and children’s institutions. Our fortified foods are produced at 11 WFP-supported factories in the country. Our support is possible thanks to generous funding from international donors, including the Russian Federation, which has been incredibly generous in recent years.

An assessment published in May shows a really concerning the situation, with more than 10 million people facing food shortages after the worst harvest in 10 years. People are cutting meals, eating less, and eating a less varied diet, which means nutrition is at risk, especially for vulnerable women and children.

Our top priority is to meet immediate food needs and to safeguard the nutrition gains made in recent years. We also need to build resilience to natural hazards in the longer term. We are now looking at the options we have that would make it possible to meet the immediate needs, and the findings of our recent assessment will undoubtedly assist in planning the way forward.

Sputnik: How would you describe the cooperation between different humanitarian organisations on the ground?

© REUTERS / Abduljabbar Zeyad/File Photo
Critical Food Aid Lines Jeopardized as Yemen’s Ceasefires Fail
Sputnik: How are North Korean authorities responding to your efforts and how is your help affected by the international sanctions imposed on Pyongyang?

David Beasley: This year, we have had continuous engagement with the government and our ability to monitor has improved, in part because of this. For example, this year, we were able to get previously inaccessible data because we strengthened our collaboration with the Central Bureau of Statistics.

All activities implemented by WFP in DPRK remain strictly within the parameters of UN Security Council resolutions, which have repeatedly stated that sanctions are not intended to affect humanitarian operations.

Sputnik: Syria, with its long-lasting conflict, is yet another trouble spot in the world’s food security sector. But there is encouraging news about fighting ceasing on the ground and a return to normal life. Do you think the crisis in Syria is still far from over?

© AP Photo / Jon Gambrell
UN Gains Access to Yemen's Red Sea Mills Food Storage Facility - Spokesman
David Beasley: The crisis in Syria is far from over. After more than eight years of conflict, millions of Syrians have fallen into hunger and poverty. The conflict has also displaced 6.2 million people within Syria. While many are returning to their homes, sometimes in ruins, most people have lost their jobs and possessions.

Those returning to their homes after fleeing from the conflict face tremendous challenges to restart their lives. Now, poverty is prevalent among 75% of the population of Syrians inside Syria. Poor families spend 80% of their income on food. This is why food assistance is vital here. Despite the challenges in Syria, WFP assists more than three million people every month and we are also helping some 400,000 people with livelihoods projects that enable them to produce their own food.

Sputnik: What assistance does the WFP provide to Syrian refugees in neighbouring countries and to people who are trying to start a new life after returning home?

David Beasley: Regionally, WFP has provided assistance to around 3,400,000 refugees as of March 2019 through different activities in Egypt, Iraq, Jordan, Lebanon and Turkey, providing general food assistance through food rations, livelihoods projects that help families to generate income, school meals to incentivise parents to send their children to school and finally nutritional support to prevent and treat malnutrition in children. All these efforts, combined, help us ensure that vulnerable communities affected by conflict are looked after and have hope for a better future.

Sputnik: Do you cooperate with Russia? How do you assess its role in the improvement of the humanitarian situation in Syria?

David Beasley: Absolutely we work with Russia. From 2012 to 2019, the Russian Federation has provided US$26,500,000 to WFP for our food assistance operations in Syria. Russia is an important partner for the World Food Programme and we very much value the dialogue we have with Russia and its leaders.

Carl's Jr. handout
Burger Joint? US Fast Food Chain Sells Out of Cannabis-Infused Hamburgers
Sputnik: In Venezuela, the WFP's activity was banned by President Maduro's government. In recent months, the Latin American country has become a major concern from both a political and humanitarian standpoint. How would you describe the situation in the country, how deep is the food crisis now, according to UN figures?

David Beasley: WFP will carry out a food security assessment to understand the ability of Venezuelans to meet their food needs.

Sputnik: Are you ready to provide aid to the Venezuelan people if the ban is lifted?

Sputnik: What are the threats and consequences of the civil confrontation in the country?

David Beasley: We are a humanitarian organisation. It is not our role to take sides in political controversies, and the work WFP does is and will continue to be independent of political or military objectives.

Sputnik: Do you think that we’ll soon be speaking of famine and other tragic issues in Venezuela?

David Beasley: As I mentioned, WFP first needs to carry out a food security assessment, and that will inform our conclusions about the situation in Venezuela.

Sputnik: As the WFP continues to provide food assistance in different regions, what aims is it pursuing? What, in your opinion, are the future challenges that need to be considered?

© AP Photo / Salvatore Laporta
They Were Loving It: Archaeologists Discover 'Fast Food' Bar in Pompeii (PHOTO)
David Beasley: Our goal is to end hunger and malnutrition in all its forms by 2030, that’s the target we have set ourselves in line with Sustainable Development Goal 2. But across the world, 821 million people are still going hungry – 124 million acutely so. The gains we thought we were making are now being pushed back as people struggle to cope with conflicts and climate shocks. Wars are dragging on and new conflicts are flaring up – those are our biggest challenges. Peace and food security, where everyone has enough to eat, go hand in hand – it’s the only road to Zero Hunger. I say all the time: the first thing global leaders need to do in order to solve the hunger problem is to end the wars.