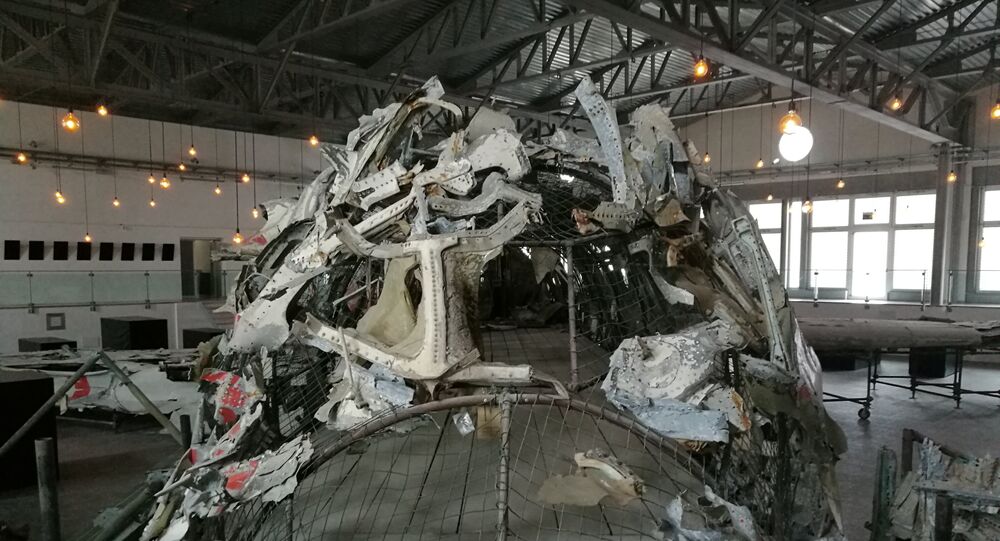 In 1980, the downing of a DC9 Aerolinee Itavia Flight 870, would spark an international hunt to find those responsible for committing the atrocities. The events unfolded amid the backdrop of the Cold War, with evidence pointing to air forces from multiple Western countries in the region being responsible for shooting down the DC9 with a missile.

Sputnik had the honour of speaking to Daria Bonfietti, Italian senator and president of the Association of Relatives of the Victims of the Ustica Massacre, who shared her knowledge of the tragedy and uplifting history behind the Memorial Museum of the Ustica in Bologna.

What Happened to Flight IH870?

According to records, the IH 870 departed at 20:08 CET from Bologna's "Guglielmo Marconi" airport, en route to Palermo with 81 passengers, including 64 adults, eleven children, two infants, and four crew members. The plane was two hours late and scheduled to arrive at 21:13.

The flight reported no problems until its final contact with "Rome Control" around 20:58 CET, and did not respond during its scheduled report for landing at 21:04. Search and rescue teams were dispatched at 21:25.

Following an intense night search, search and rescue teams could not find wreckage in the Tyrrhenian Sea until dawn, when a helicopter spotted debris between the Ustica and Ponza islands. Only thirty-eight bodies were recovered amongst the wreckage.

An investigation by police in Milan and Rome, alongside the Ministery of Transport, was launched shortly afterwards to determine the cause of the plane crash in 1981, but ruled out structural damage, instead citing poor maintenance.

The case remained in obscurity until a newspaper reported in 1986 that the plane had been shot down, sparking an appeal to Italian president Francesco Cossiga from politicians and intellectuals so that "every doubt, as minimal as it might be, on the possibility of a military action harmful to human lives and the primary public interests can be dispelled," eventually leading to the Ustica Association's creation.

Ms. Daria Bonfietti founded the association in 1988 after losing her sister to the tragedy.

A parliamentary commission was established by Senator Libero Gualtieri in 1989, along with two complex recovery operations to locate 96 percent of the aircraft's wreckage in 1987 and 1991. 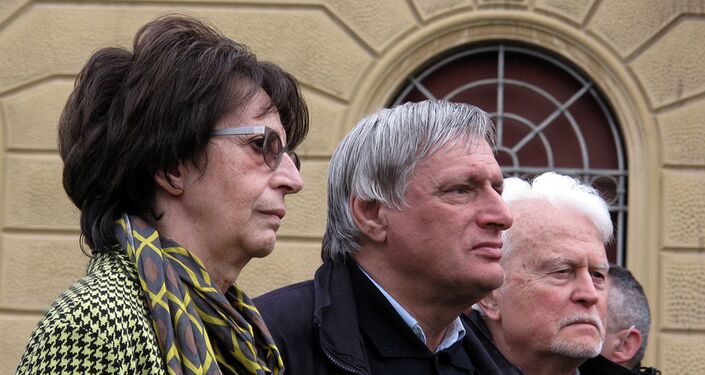 The commission noted the suspicious behaviour of Italian military officials at radar centres who hid evidence of the incident. Following the report, Italian judges ruled that the Italian Air Force had tampered with evidence, leading to an inability to investigate the causes of the crime.

Italian Air Force officials were charged with high treason in 1992 for omitting "information on the possibility of military operations" in the Tyrrhenian Sea and had "abused their authority and deliberately given the political authorities false information". But, due to a lapse in the statute of limitations for the charges, the defendants were acquitted by the Italian High Court of Appeal in 2007.

But Italian justice Rosario Priorie's investigation concluded in 1999 that "the DC9's accident had happened after a military interception manoeuvre", indicating a military strike against the plane. Further court hearings would show in 2015 that a missile had downed the aircraft.

A Message from President Bonfietti

Ms. Bonfietti told Sputnik that the reason why she wanted the museum was to create a space where "not simply the victim's relatives, but all Italians and foreigners can remember the tragic episode".

She also noted that "many countries were involved" in the events leading to the IH870's downing. "Italian magistrate [Rosario Priore] confirmed that the DC9 had been shot down during an airplane battle. At the moment, we know that there were US, French, English and Belgian planes in the vicinity."

"Some planes — probably Libyan — had turned off their transponders," she said.

"This is the context in which the tragedy happened," she said, adding that "something was meant to happen, but could not be disclosed. But it did not happen".

"This allowed, I believe, for the nations involved in that incident in the skies to tell this lie, in order to avoid retaliation for what they had planned to do: the shooting down of Libyan leader Muammar Gaddafi's plane," Ms. Bonfietti said. 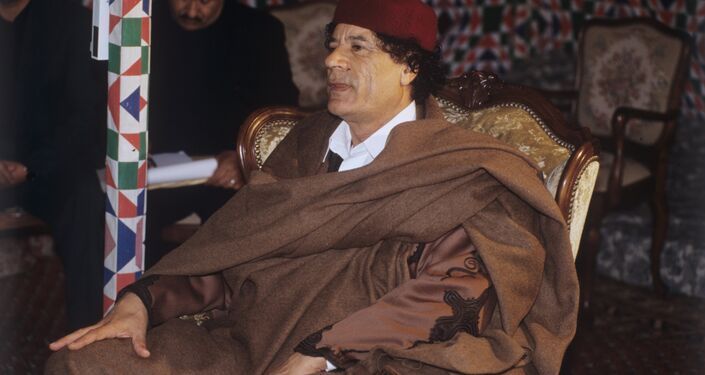 "They couldn't, because it didn't happen," Ms. Bonfietti said. She explained that if Western forces had been successful, "they would not have claimed responsibility because World War III would have broken out, because there was the Soviet Union".

"This was the context and the magnitude of the incident," she said. "This is why we wanted to remember."

"We wanted to find a way to speak about this as much as possible, to Italian and citizens everywhere so that, even if those in power commit atrocities, the public can eventually find out the truth that others try to hide," Ms. Bonfietti said.

She also explained that, as the president of the Association, she always thought that the "language of art was the best to help others remember", stating that it "is the only thing that would allow this museum to survive forever, because everyone would always come to see Mr. Boltanski, just as we and the people after us have seen Da Vinci's ‘Mona Lisa', Van Gogh, and others across the world".

She also thanked Mr. Boltanski for his help for working "alongside us after we told him a story he wasn't familiar with, and creating this amazing masterpiece that touches the heart of everyone that sees it".

"Through the remains of the DC9, he worked without creating something offensive or heavy," she said. "We asked him if he could work with us that June, but after his arrival, he decided not to shape his art in front of the museum, but inside so that it could become a part of the museum itself".

Not as a distraction, but Mr. Boltanski performed for four days at the Sun Arena (Arena del Sole) to commemorate the Ustica massacre in his piece called "Ultima", using the entire theatre, covering parts of it and filling it with voices in such a profound way to remind us that art is the best way to remember the past.

When asked how the Association was seeking justice, she said that "we've already obtained the truth — that the DC9 had been shot down," adding that "those responsible are now long gone because we still don't know who committed the atrocity".

She explained that the Italian magistrate is still conducting an international investigation and that, in civil tribunals, many relatives have sought compensation and won because the Italian ministers of Justice and Transport failed to exercise their duty to monitor and protect those affected by the tragedy.

"Many of the rulings were definitive and in favour of the relatives," Ms. Bonfietti said. "But for me, it is enough to commemorate every 27 June, the anniversary of the massacre, we do lots of initiatives at the museum's park, again using the many languages of art so that young people like you who are helping us more and more can help others remember through your talents and creativity using all mediums — music, video and dance — in every way possible."

She said that there would be six to seven events planned from 27 June until 10 August, as each year, featuring "young people telling this story through the emotion created in them through all the languages of art".

The Museum for the Memory of the Ustica Massacre

The museum opened on 27 June 2007, one year following the arrival of the remains of the DC9. The Ustica Association, alongside president Bonfietti, hosts the permanent works commissioned by French-Ukrainian artist Christian Boltanski, with the museum also working in partnership with the Institution of Museums in Bologna.

Upon entering the museum, visitors can find 81 black mirrors hang along the walls, allowing each to "plunge" their gaze into the abyss of mortality as a "choir" of haunting voices whisper from 81 loudspeakers throughout the gallery, representing the "spirit of every missing person", the museum said. 81 slowly pulsating lights hang from the ceiling, representing 81 souls oscillating between being forgotten and remembered.

Photos from the Museum for the Memory of the Ustica. Flight IH870 was tragically shot down by a military missile on 27 June 1980, sparking controversy across Italy and prompting an international investigation in what was later seen as a cover-up from Italian authorities. The party responsible for the attack is still unknown, but believed to be NATO forces acting on the backdrop of the Cold War.

At the centre lies a montage of wreckage from flight IH870 — a collage of broken artefacts, including fragments from the plane's fuselage, tail, wing and cockpit — meticulously reconstructed by the museum's team, assembling 96 percent of the plane's original body.

Nine black boxes containing items from the victims, including glasses, clothing, and shoes, remain sat alongside the centrepiece wreckage. The belongings are kept out of sight from the public eye, but were inventoried in a series of distorted images catalogued by Mr. Boltanski in his "List of Personal Belongings of the Passengers of Flight IH870".

Visitors can watch a 30-minute documentary of the tragedy in the museum's video room, complete with films and accounts from newspapers and television programmes. The documentary highlights the "collective tragedy that cannot and must not be forgotten, that has to live in our consciences and become history", the museum stated.