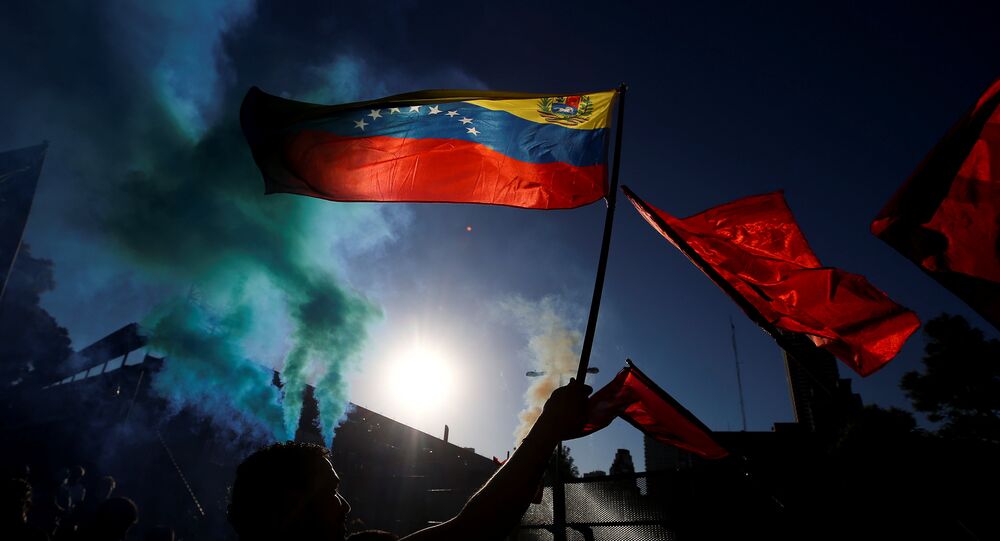 Sputnik spoke to a spokesperson from the bi-monthly publication Fight Racism! Fight Imperialism! on Ms. Thornberry's comments and highlighted the history of imperialism in the Labour government.

Labour, Not Venezuela, Has Betrayed Socialism

© REUTERS / Manaure Quintero
Labour Party Split: Thornberry Breaks Ranks With Corbyn Over Maduro Support
Responding to Emily Thornberry MP's comments, the spokesperson told Sputnik that they had "no idea what Ms. Thornberry understands by socialism or what it means to her to ‘betray' socialism".

"She cries crocodile tears over human rights abuses yet she stated that her party will back targeted sanctions and ‘whatever means necessary' short of a military invasion to force change," the spokesperson said, adding that Ms. Thornberry strongly believes in sanctions "to use foreign policy muscle ‘that doesn't involve killing people'," and that UK Labour leader Jeremy Corbyn "has not made any public attempt to counter this".

Emily Thornberry’s statement in parliament yesterday basically endorses the US coup in Venezuela. There is no clear condemnation of the principle of US regime change. Fine to condemn Maduro but also no mention of sanctions. https://t.co/gvmZCyV5EY pic.twitter.com/U6tgVC62HC

"Sanctions on Iraq have killed 1.5 million people, and in Iran are killing patients due to lack of access to medical equipment and funds," the spokesperson said, adding that sanctions on Gaza mean that in 2017 alone, "54 patients have died due to being unable to travel outwards for hospital treatment," according to reports.

Sanctions will also kill Venezuelans "because they cannot get the medication they need", the spokesperson said. "On 8 February, employees from the Luis Razetti hospital in Barcelona, Venezuela said as quoted by al-Jazeera that "14 children have died this week following an outbreak of amoebiasis, a form of dysentery transmitted by contaminated food or water" and that "dozens of other children infected by the disease cannot receive adequate treatment due to a lack of medical supplies".

Christina García, executive director of the Venezuelan Association of Clinics and Hospitals (AVTS) said in 2017 that the "private health care sector has a "grave" problem for providers of medicines" and as Venezuela does not produce its own medical supplies, "86 [percent] of supplies are imported".

"Sanctions are weaponising hunger and healthcare for political ends", implicating that when the US and its Western allies send "humanitarian aid" to countries they cripple via sanctions and economic blockades, they are only doing so to look like the good guys.

© CC0 / Pixabay
'Mountain of Lies': Venezuela Slams US Bloc at OAS Meeting Over Humanitarian Aid, Elections Demand
The Labour party "is not a socialist one in practise" as "local Labour councils have slashed public services, sold off swathes of council housing to the highest bidder and implemented the devastating bedroom tax, leaving working class people in their communities homeless and destitute," the spokesperson said.

Even 'Marxist firebrand' John McDonnell has made overtures to win trust from the City of London financial district, by telling John Flint, HSBC chief executive on BBC Radio 4 that “Before we go any further, I’m not going to nationalise your bank".

Despite this, Venezuela was "still not a socialist country", the spokesperson said, noting that nearly "70 percent of Venezuela's economy, banking sector and media remains in private hands."

But the FRFI recognises "the immense challenges faced by a former colony dependent on the extraction of raw materials in the US backyard" and "the contributions that Venezuela's sustained challenge to imperialism can make to the fight for socialism worldwide."

"The fact that Maduro is committed to expanding social welfare, despite crippling sanctions and a spiralling economic crisis, is surely testimony to his socialist commitment," they said.

Juan Guaidó, The Socialist International and The Labour Party

The FRFI spokesperson explained that Mr. Guaido is "a founder of the Popular Will party led by Leopoldo López, a Harvard-educated, right-wing politician heavily involved in National Endowment for Democracy programmes", in addition to receiving a Democracy Award from the NED in 2015.

"Mr. Lopez is a Venezuelan aristocrat, directly descended from his country's first president, and the first cousin of US-based Human Rights Foundation founder and colour revolutionary Thor Halvorssen," they said.

Halvorssen also founded the Oslo Freedom Forum and is CEO of the Foundation for Individual Rights in Education (FIRE) who regularly appears on mainstream Western media outlets such as The Washington Post, Economist, Wall Street Journal, New York Times, Fox News, MSNBC, and others.

"Popular Will have regularly led violent destabilisation campaigns, including the Guarimba (street barricade) protests that have killed over 100 Venezuelans from all walks of life," they said. "Lopez is currently under house arrest for links to three deaths during the 2014 protests, and Guaido was proud of his direct involvement in street protests in 2014, tweeting a video of himself clad in a helmet and gas mask on the barricades."

Venezuela coup leader Juan Guaidó participates in violent guarimba riot in 2014. This group is the most violent in #Venezuela. This says alot about the direction that the potential future leader will take the country https://t.co/c0bN3RoPPm

"Freddy Guevara, the National Assembly Vice-President and Popular Will deputy, was a key leader in the 2017 street riots. Lester Toledo, a Popular Will legislator from the state of Zulia, fled Venezuela after charges were brought against him for financing terrorism and plotting assassinations. Carlos Graffe, another Popular Will leader was arrested in July 2017 in possession of a bag filled with nails, C4 explosives and a detonator. These are Popular Will's poster boys for Venezuela's future."

FRFI added that if the coup succeeded, "Guaido has promised to implement the US-sponsored Plan Pais which would "dismantle state regulations, access IMF loans, allow private capital to hold majority stakes in the public sector and open the oil industry up to multinational corporation ownership".

Labour MP Graham Jones recently said in a letter: "I am proud to stand with Juan Guaido, a member of Labour's sister socialista party (Popular Will) in Venezuela". This speaks volumes about Labour's agenda.

Labour: A History of Imperialism, Connections within the US-Led Destabilisation Campaign against Venezuela

The FRFI spokesperson explained how Labour's Corbyn "made numerous concessions to the right wing to maintain Labour unity and ensure the party stays a parliamentary force," adding that the shadow PM had gone from "heading the Stop the War movement to backing down and allowing a free vote in parliament over bombing Syria and renewing Trident."

"Beyond window dressing, I don't see any substantial difference between Corbyn's Momentum faction and Thornberry's supposedly Blairite one. Old Labour, New Labour, Corbyn's Labour, they are all committed to defending the interests of British imperialism, at home and abroad," the spokesperson said.

The spokesperson explained that in April 1999, "Labour prime minister Tony Blair made his Chicago speech presenting the ‘Doctrine of International Community' to justify ‘humanitarian interventions' in other countries", foreshadowing the Labour government's support and participation in the 2003 invasion of Iraq and followed on from the UK Royal Air Force bombing the former Yugoslavia.

© REUTERS / Carlos Garcia Rawlins
Venezuela Stalled Coup: US' Allies May Soon Regret They Rushed to Embrace Guaido – Journo
"The NGO-human rights industry has gone into overdrive in recent years, working alongside the ‘liberal' press and have backed [US National Security Advisor] John Bolton's Troika of Tyranny speech and ramped up attacks on Cuba, Venezuela and Nicaragua," they said.

"London-based Amnesty International also accused the Venezuelan government in September 2018 of 'one of the worst human rights crises in its history', but its report does not even mention economic sanctions. Nor are there any references to the opposition's petrol bombs and barricades, nor the murder of Orlando Jose Figuera, a black street vendor stabbed multiple times and burned alive during an opposition rally on suspicion of being a Chavista."

Amnesty instead lists Leopoldo Lopez as a "prisoner of conscience", despite him leading "four separate attempts to overthrow the government and his links to 13 fatalities", the spokesperson explained.

"The not-so-independent Mercy Corps cited the DC-based think-tank Center for Strategic and International Studies (CSIS), stating ‘new-borns in Syria have a better chance of survival than those born in Venezuela today'. As well as working with opposition forces in Syria, Mercy Corps have been scouting for finance to support their work on the Venezuelan-Colombian border."

The Paper Trail of Imperialist NGOs in Venezuela

Nina Cross, investigative journalist for the Morning Star, found that Mercy Corps' CEO Neal Keny-Guyer paid himself $460,000 in 2017 and sits on the US Council on Foreign relations (CFR)," the FRFI spokesperson said, adding that "CFR president Richard Haass was publicly recognised as an advisor in Trump's election campaign".

© Sputnik / Carlos Aerera
Whose Side Are You On – Trump or Maduro? Darkness or Democracy?
"Keny-Guyer is also the chairman for Interaction, a US alliance of NGOs, and sits on the World Economic Forum's global agenda council on fragility, violence and conflict. In 2016, Mercy Corps received over $464 million in government grants and private donations, yet only spent $186 million on ‘humanitarian relief and recovery'. They are paid well to advance US interests."

The spokesperson also explained how "Amnesty International general secretaries take home £200,000 a year and senior directors £100,000" and that the organisation's "business ethics directors include Geoffrey Chandler, the former director of Shell, while Suzanne Nossel secured an executive post at Amnesty International USA fresh out of the US State Department. In 2008, Britain's Department for International Development donated over £3m."