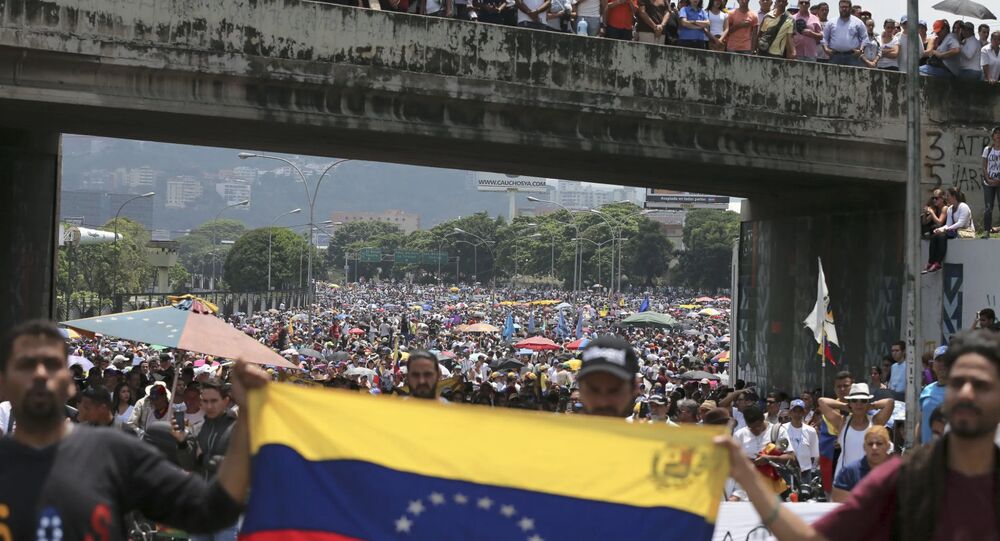 Italy Against Any Foreign Interference in Venezuela’s Affairs - Deputy FM

The situation in Caracas is deteriorating, with some countries recognising self-proclaimed interim president Juan Guaido as the head state of Venezuela. Rome, however, has refused to recognise Guaido, stressing that it is crucial to avoid a military conflict in the South American country.

Sputnik: Crisis in Venezuela has become really internationalised. Some countries are trying to openly interfere in it and influence the domestic situation. In your opinion, does it set a dangerous precedent?

Guglielmo Picchi: Certainly, we are absolutely against any external interference in Venezuela's domestic affairs. But the problem is that the whole international community recognised the results only of the elections to the National Assembly, and not of the presidential elections that took place at the end of last year. Therefore, the only election of Mr. Guaido is considered to be legitimate.

READ MORE: US Using Delivery of Aid as Pretext to Start War Against Venezuela — Envoy

Sputnik: Italy is one of few countries who did not recognise Guaido as interim president on Monday. What is the reason for such a position? Is it an unwillingness to interfere in the domestic affairs of another country, or something else?

© CC0
Italy Not Recognizing Guaido as Venezuelan Interim President - Deputy FM
Guglielmo Picchi: Position of Italy derives from the fact that it is very important for us to support our community, Italian National Community in Venezuela. In this difficult situation, it is our priority. That is why Italy took a softer stance compared to one of our European partners. Furthermore, we appreciated the recent statement of [Russian] Minister of Foreign Affairs Sergei Lavrov to propose an international mediation and to find a diplomatic solution to the crisis.

We support a transition process that brings the country to new presidential elections, because Maduro is not a legitimate president since the whole international community did not recognise his election.

For us, it is very important that free and fair elections be held in Venezuela.

Sputnik: The European Commission announced that the EU had allocated an additional 5 million euros to help Venezuelans affected by the crisis and planned to open a humanitarian office in Caracas. Should aid go through the already existing channels, or should some new ones be established?

Guglielmo Picchi: All forms and channels of humanitarian aid are welcome, including of course the already established channels — the UN and Red Cross."

Sputnik: Tomorrow an international conference on Venezuela is taking place in Montevideo. Federica Mogherini states earlier that international contact groups would be created after this conference. Is Italy going to participate and play a role?

Guglielmo Picchi: Italy will play a role in this conference together with our European allies and with regional states. This position that Maduro must go was expressed also by all Latin American countries, which is very interesting from the perspective of the balance in the region.

© REUTERS / Carlos Garcia Rawlins
Macron's Recognition of Guaido Same as Supporting Coup in Venezuela - French Lawmaker
Protection of the Italian national minority in Venezuela on one side, and free and fair elections on the other side remain our main priorities, and we will push them forward within the framework of any contact groups.

Italy will participate at the highest level within the contact group in Uruguay. For us, it is very important to avoid a civil war in Venezuela, and all diplomatic efforts will be taken in this sense.