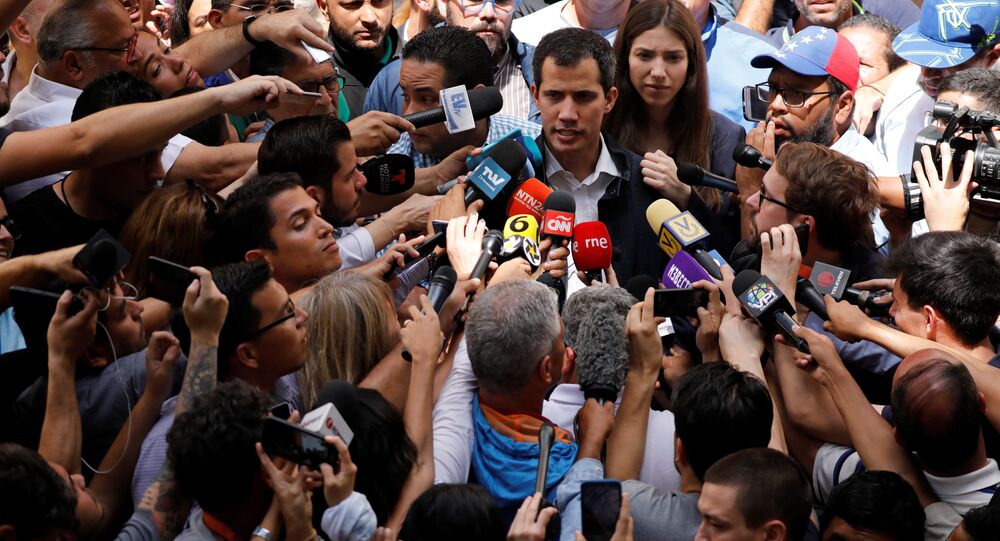 Sputnik has interviewed Gustavo Tarre, ambassador to the Organisation of American States (OAS) that Venezuela’s National Assembly appointed despite a decision by the legitimate government under Nicolas Maduro to withdraw the country’s membership in the organisation.

Gustavo Tarre was appointed "special representative" to the OAS by the National Assembly in late January in order to coordinate "with the organisation the necessary actions for the restoration of the constitutional order" in Venezuela amid a deepening political crisis in the country. The statement was made after in 2017 Venezuela announced plans to withdraw from the OAS, saying the organisation interfered in Caracas’ internal affairs.

Tarre’s appointment comes as political turbulence in the Latin American state broke out after opposition leader Juan Guaido proclaimed himself interim president in late January. This decision prompted almost immediate recognition from US President Donald Trump and some European states. The recognition of Guaido’s presidency was lambasted by a number of states, including Russia, Mexico, and Uruguay who voiced support for Maduro as the only legitimate president of Venezuela.

Sputnik: What would be your reaction to yesterday’s decision by the Supreme Court on Guaido and how it will complicate the process?

Gustavo Tarre: This Supreme Court was nominated in violation of the Constitution and we do not accept that.

Sputnik: Are you working actually on the possible meeting between Guaido and Trump?

© CC BY 2.0 / Julián Ortega Martínez / Bandera de Colombia
Colombia Bars Entry to Over 200 Supporters of Venezuela’s Maduro - Reports
Sputnik: Do you think there should be meetings between Guaido and the US side and how it can happen?

Gustavo Tarre: I don’t think the priorities of the acting president is travel outside of Venezuela.

Sputnik: He is not planning to travel?

Sputnik: What is your position about a possible military option?

Sputnik: There are talks about a possible military option in Venezuela by the US. Would you support that?

© AP Photo / Alik Keplicz
US Should Not Engage Militarily in Venezuela - Ex-SOUTHCOM Commander Stavridis
Gustavo Tarre: No, we don’t think that the… The problem is going to be solved by Venezuelans. I am absolutely sure the armed forces will adhere to the Constitution and support President Guaido.

Sputnik: Maduro said he is ready to meet with the opposition. Do you think there should be meetings between the opposition and Maduro?

Gustavo Tarre: As a personal opinion – no, because each time Maduro offers to meet the opposition is to gain time and to make the international community think he is a democratic president. The value of Maduro’s word is zero.

Sputnik: Is the OAS planning any contacts with Russia on the Venezuelan crisis?

Sputnik: But does OAS have any contact with Russia?

Gustavo Tarre: I don’t know. I don’t know because it is not my job. If there is any contact it's Secretary Amalgro and not me.

Sputnik: When is the next OAS meeting on Venezuela?

Sputnik: What is your vision on the perspectives of this 8-day ultimatum?  What do you think it is going to happen next and what do you expect the European Union to do?

Gustavo Tarre: Very easy question, it is not a question for me. You have to ask the Europeans. What I hope is that they are going to recognise the Juan Guaido government.

Sputnik: What is your vision on the future of Maduro? What should happen to him?

Gustavo Tarre: I have no personal opinion about his future. As a politician he has come to an end and he is no longer president of Venezuela. He has no support from the Venezuelan people. And what he is going to do with himself is his problem and not mine.

© AP Photo / Vahid Salemi
Venezuela Must Free Itself from 'Dollar Blackmail' - Maduro
Sputnik: Does the Venezuelan opposition plan to go to international courts?

Gustavo Tarre: Yes, yes, there is a lot of crime, a lot of corruption. At the moment we can put Maduro on trial, he will be on trial.

Gustavo Tarre: No, he is not alone. There are a few ministers and functionaries that have killed people and stole a lot of money, and they are going to be judged — but in the future. At this moment, it is not one of our priorities.

Sputnik: By any chance are you in contact with the diplomats who pledged an oath to Guaido and who are here in the United States?

© REUTERS / Marco Bello
Protected by Armor: US Sanctions Pose no Risk for Russia-Venezuela Ties - Maduro
Sputnik: Do you provide any support for them?

Gustavo Tarre: I don’t know, the Ambassador to the United States is Vecchio and he has the contacts and has the answers to your question.

Sputnik: Do you have any numbers, how many?

Venezuela is currently dealing with political turmoil and large-scale anti-government rallies. Opposition leader Juan Guaido has declared himself the country's interim president, admitting in an interview with German news outlet ARD news outlet that he had coordinated his actions with the US authorities. He fell short of mentioning if he backed foreign intervention in Venezuela.

During a Monday announcement at the White House regarding new sanctions against Venezuela, US National Security Adviser Bolton was photographed holding a yellow notepad that read: "5,000 troops to Colombia", sparking widespread speculation that the Trump administration has been mulling over the deployment of US military forces to Venezuela's neighbour.

The political crisis in Venezuela reached the boiling point a few days ago, on 23 January, separating the country into two blocs: those who supported the self-proclaimed interim president Juan Guaido, the head of the opposition-led National Assembly; and those backing the elected president Nicolas Maduro. The international community is divided as well. The US and some of its allies recognised Juan Guaido immediately, with Washington subsequently imposing sanctions on the country’s oil and gas giant PDVSA, while others, like Russia, Iran, Turkey, China, Nicaragua and El Salvador have backed Nicolas Maduro.