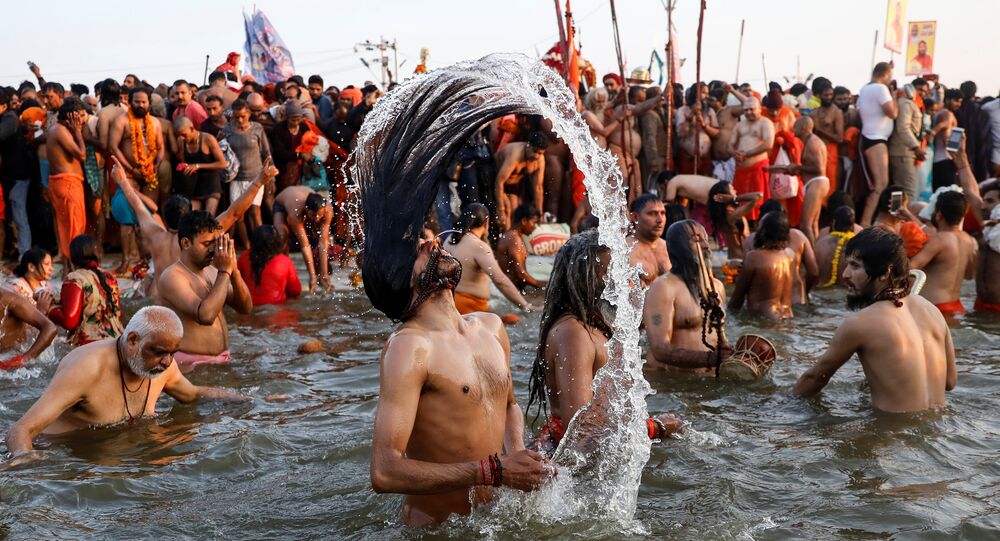 One of the largest human congregations on earth, Kumbh Mela, which began on 15 January and will culminate on 4 March, is underway in India. The event will have some 150 million devotees coming to pray and take dips in holy rivers, according to officials. For a congregation as huge as this, the administrative challenges are also truly monumental.

Deputy Inspector General of Uttar Pradesh Police K. P. Singh is responsible for the security and safety arrangements for the currently in-progress Kumbh Mela at Prayagraj in the northern Indian state of Uttar Pradesh. In a conversation with Sputnik, K. P. Singh shares the scale of the arrangements that have been put in place to provide smooth and trouble-free security measures to the visitors of the Kumbh 2019, which is estimated to be the world's largest religious gathering.

The Paush Purnima Snan is the second holy snan of #Kumbh.
It also marks the entry of kalpwasis in the kumbh

The #PaushPurnima snan at kumbh went off peaceful today due to the vigilance of Police, Paramilitary forces and the vigilance of citizens. #KumbhSnan #KumbhMelaPolice pic.twitter.com/m2NaT3QKWe

​Sputnik: You have extensive experience in providing security at various Kumbh Mela congregations in years gone by. How is Kumbh Mela 2019 different from the previous ones?

K. P. Singh: This year's Kumbh is largest in terms of the area in which the event is taking place. Kumbh Mela of previous years were held across an area of 16 square kilometres (1,600 hectares), while this year the area has been doubled to 32 square kilometres.

Kumbh Mela has started in India. By far the biggest gathering of humans anywhere in the world. Fortunately this happens at a time there is a boost for Ganga clean up. Sewage from Asia’s oldest drain is diverted:https://t.co/6nMjIHAFxB

Further, around 150 million people are expected to visit the Mela. Therefore providing security to the Kumbh is a mammoth exercise. On specific days, almost 55 lakh (5.5 million) people thronged to take a holy dip at the confluence of the rivers Ganga, Yamuna and Saraswati, a place that is also known as the Sangam.

#PaushPurnima is considered to be auspicious and it marks the beginning of month-long Kalp Vas at #KumbhMela2019.
Throughout the Kalp Vas period, lakhs of people will be staying at small tents near the Sangam for a month to take bath thrice daily and eat only once in a day. pic.twitter.com/OufRNg7kMS

​Sputnik: How are you keeping the Kumbh Mela safe and secure?

#WeLikeKumbhMela
Happy with the facilities and services This overseas couple believes that Attending Kumbh was an opportunity of their life time.
Arrangements done by @myogiadityanath's govt is applauded by both domestic and foreign crowd alike.#KumbhMela2019 pic.twitter.com/SEMvpU3kW5

Around 8,500 personnel of the civil police, fire services and radio and communication services are deployed here additionally.Furthermore, we have deployed anti-mine vehicles here. These vehicles are used by STF for operations in forest areas and are now made available to us for the Kumbh Mela.

#NDRF Rescue Team is working efficiently for making #Kumbh2019 a #SurakshitKumbh. Sangeeta Mishra, 55 was saved from drowning by the NDRF Water Ambulance at #Prayagraj. pic.twitter.com/giZqsWQ81n

​Sputnik: Do you have special intelligence units here?

K. P. Singh: Apart from the paramilitary police forces, LIUs (Local Intelligence Units) and Military Intelligence (MI) are also helping and assisting us in gathering information that is vital for security operations in an area as vast and heterogeneous as the Kumbh Mela venue.

Various intelligence agencies are working in coordination with each other.

Sputnik: Apart from the Mela venue, what are your security arrangements for the main city?

K. P. Singh: Apart from the Mela area, the CISF (Central Industrial Security Force) has been deployed at the Prayagraj Railway Station and all the sensitive places in the city. We have also deployed the state police force to make Prayagraj city safe and secure. A 3,000-strong traffic police team has been deployed to control traffic inside the Mela area. They also control roads leading to the Kumbh Mela.

For the first time, we have deployed three women police battalions at the Kumbh Mela venue to cater to women pilgrims. We have ensured that the Mela is safe and secure. We want all visitors to carry a positive image of the Kumbh Mela.

The views and opinions expressed by the speaker in this article are those of the speaker and do not necessarily reflect the position of Sputnik.