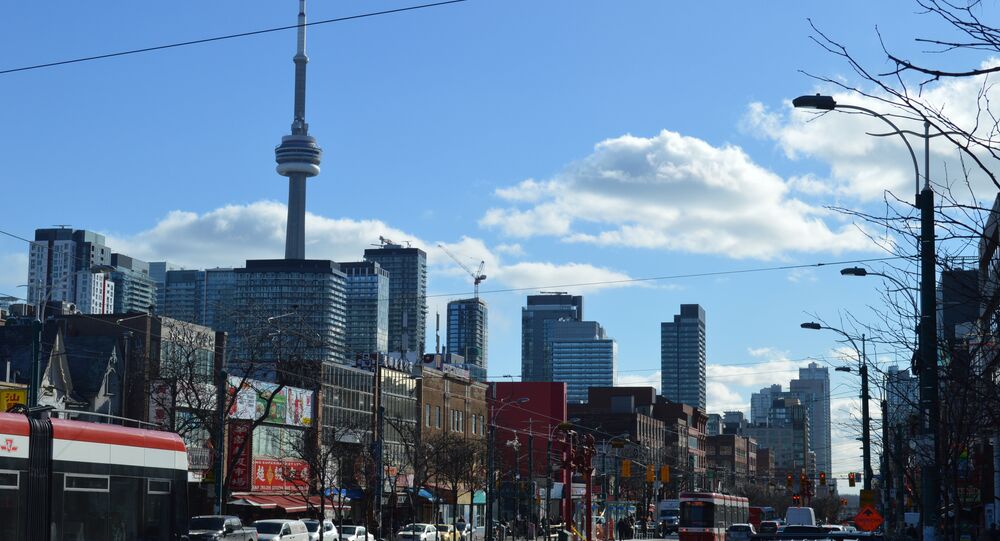 Canadian Journalist: 'Our Prime Minister Has Manufactured an Open-Border Crisis'

Hundreds of people are crossing the border from Upstate New York in the US to Canada's Quebec every day to claim refugee status in the Great White North. Even though Roxham road is not a legal port of entry, Canadian authorities let the “border jumpers” in.

Sputnik's Denis Bolotsky went on a stakeout at Roxham Road with Faith Goldy* — a Canadian nationalist activist and right-wing journalist, who's been covering Canada's border crisis for several years.

As more refugees were leaving taxis on the US side of the border at 8am, Sputnik asked Faith Goldy to comment on what she, and many other Canadians consider an open-border crisis.

We saw a constant flow of people coming to the border from Upstate New York in cabs. The procedure is always the same: RCMP officers tell the jumpers to stop, they proceed, they are escorted into the building where they file refugee paperwork and walk freely into Canada pic.twitter.com/3OXvLV3iwH

Sputnik: This has been going on for quite a while.  We've seen at least 13 people cross the border illegally within just a couple of hours this morning. Are regular Canadians aware of what's happening here, do the local media tell them about it, and about the reasons for all this?

© AP Photo / Alden Pellett
Looking Down on America: Canada's 2018 From Trade War to Pot Legalisation
Faith Goldy: I think it depends on the individual's "media diet". If you consume the mainstream media — you don't know about it. And if you do, it's by chance, and the sort of coverage that this has received is very positive — like "Canada is doing a service to not just Canadians, but the world". For those who are the consumers of the alternative media, people who have followed my content (I was the first journalist to break this story), they know what's going on.

This has been a déjà vu every day and every night for years now, where there is revolving around-the-clock illegal access point into Canada, and I'll remind folks: we share the longest undefended border in the world. It's something that the majority of Canadians have never thought about. In my three decades I never paid it any attention until Justin Trudeau became elected prime minister. And now we're being forced to think about it, but then there are really those in the media who really don't want us to, because people start to get upset when they realise that their "pension pennies" — they are being hosed by the taxman, meanwhile folks walk up here — they get free health care, free education and an allowance, not to mention housing.

Sputnik: Why is this happening in Canada?

Faith Goldy: Very simply because our prime minister has manufactured an open-border crisis without democratic mandate, when several years ago he released a tweet "welcoming the world" to claim refugee status in Canada with a hashtag #WelcomeToCanada. Almost immediately thereafter Roxham Road became an illegal port of entry, where we saw an influx of unprecedented numbers, which to date only continue to rise with each passing month.

This tweet by PM Trudeau helped to make a "hole” in Canada’s border. In a blink of an eye the country started letting in anyone who claims refugee status, and who eventually enjoy benefits, which are not available to most Canadians, let alone qualified immigrants. pic.twitter.com/pz51hZsgin

Sputnik: Right before we came to the border, it was announced that Canadian authorities are planning to decrease the flow of illegal immigrants. In your opinion, why are they doing this, and do you see it as a positive development?

Faith Goldy: That only applies to Quebec. Quebec has recently elected a right-wing government. And, to his credit, the premier of Quebec has fought for Québécois interests with the prime minister. The prime minister has said that we're going to be raising consecutively for the next three years immigration rates, or intake rates. He obviously has expressed no interest in sealing our border. He could do so with the signature, he could do so with the fence, which would seal up this particular entryway, where we see over 90 per cent of our illegal migrants flow through.

The path of illegal border crossers in Canada is not paved with gold, but “the package” they get is actually not that bad: refugees get free transportation, decent food, rooms at hotels like this one outside Toronto – all at the expense of taxpayer. pic.twitter.com/zxcE6N32S0

Faith Goldy: When it comes to the Quebec case — they are looking at reducing for a short-term period of time immigration intake by 20 per cent. And that number will be applied to refugees, family reunification and economic migrants alike. So "Bravo, Quebec", but "what's going on, Justin Trudeau"? Why does Quebec get treated with a double standard? Under Justin Trudeau, to date, migrants are allowed to choose whether they want to stay in Quebec, or go to Ontario, so if Quebec sees a reduction, it means an increase for us in Ontario.

Sputnik: When you see reports about refugees, you would probably imagine harsh conditions that these people experience. Here they are offered a choice of hotels, food and other things, like a resort. What do you think about it?

Faith Goldy: It's pretty cushy all the way up for most of the folks. The majority of the people are either on extended visas in America, which means that they've been living in one of the greatest nations on Earth, or they are flying though America — fly… on a plane. Not everyone who is watching this can afford a plane ticket to anywhere they feel like. They've taken Greyhound buses, which are not exactly "dingy little potato carriers". They take a fine cab, and once they get to the border, they're about to set their foot on "golden soil", because the RCMP — God bless them — they're doing their job, which is to say — following orders.

Officers at Roxham Rd. were very polite to us, but “the Russian journalist” triggered a slight alarm: they asked me for my ID – probably “just in case”. Who knows, maybe their higher-ups consider @SputnikInt a bigger threat to their country than legions of illegal border jumpers.

Faith Goldy: They [RCMP officers] have been carrying their bags, they process them very gently. They are not treated like criminals. Let's be clear: a criminal, by definition, is someone who breaks the law. Their first act upon entering our nation is to break our law, and yet, they are treated — some would argue — in a way that most Canadians would desire to be treated.

*Faith Goldy is the former Toronto mayoral candidate, who came third in the election and secured 26,000 votes. She covered the 2017 Unite the Right rally in Charlottesville, Virginia for Rebel Media, a right-wing political and social commentary website, and has widely been deemed as a controversial figure.