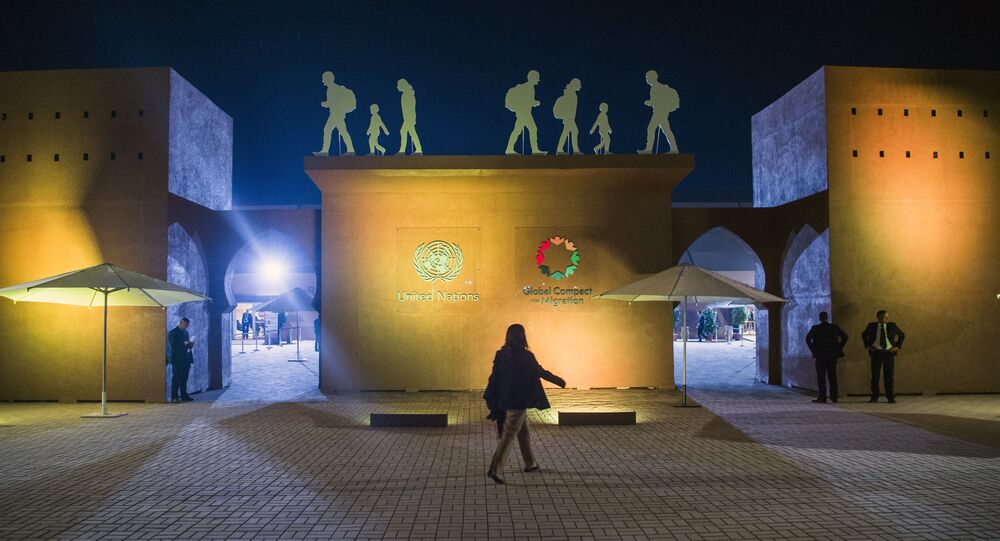 According to a Belgium Royal Palace statement, the Belgian King has put Prime Minister Charles Michel's resignation on hold; earlier, the PM announced his intention to stand down after losing a no confidence vote in parliament.

The news comes as the New Flemish Alliance quit the ruling coalition over the signing of the UN Global Migration compact that aims to ease the burden on developing nations, which host 90 percent of an estimated 25 million refugees. The move resulted in the new coalition only managing a minority in parliament.

Radio Sputnik discussed the prospects of this political crisis with Régis Dandoy, a professor in Political Science at the Centre for Local Politics at Ghent University in Belgium.

Sputnik: So in your view how will this move by the monarch impact the already shaky situation in the Belgian Parliament? And is this quite an unprecedented move?

© REUTERS / Francois Lenoir
Belgium N-VA Party Threatens to Exit Ruling Coalition Over UN Migration Pact
Professor Régis Dandoy: No, it is not unprecedented. There have been a lot of political crises you have seen in Belgium over the last few years: governments fell, instability, the resignation of ministers.

And the usual move of the King is just temporisation: taking his time just to consult to different actors, not accepting directly the resignation of the prime minister, of the government, and see whether he can revive the government or if he needs to find another solution or other solutions.

Taking the time can also give some break to the main political actors in order to find another solution to the political crisis.

Sputnik: So do you think this is actually stabilising the situation in the Belgian Parliament rather than having any other effect?

So there has been a lot of tensions. So these few days where the King said "Okay, give me the power, I will negotiate and I will discuss with the main actors, and I will try to find a solution, probably."

It is a good way to give a bit of oxygen to the Belgium political landscape trying to see what can be saved from the current government and how we can improve the situation for the next few weeks or next few months.

Sputnik: Do you think that we are going to see snap elections now?

Professor Régis Dandoy: Unlikely, because there will be elections in six months in Belgium, for the regional and European elections.

© AP Photo / Virginia Mayo
Belgium Reportedly Plans to Create All-Female Special Forces Unit
And the idea was to have the national elections, federal elections on the same day, Ascension Day, at the end of May, [although] some actors are calling for early elections.

If we are talking about early elections it means that the parliament needs to be dissolved and that the elections would take place within 40 days. So that would bring us to the end of February.

That might be too close to the elections of May. So one of the solutions would be that the government stays as [acting] government until the election of May but that is a long way, it is six months. Let's see what the King will propose and what the actors will think about it.

Sputnik: If we were to see early elections would that significantly impact the outcome that we would expect as opposed to if they were to come in due time in May?

Professor Régis Dandoy: Yes, definitely. The political environment is very specific for the moment with all these tensions around the migration compact, tensions between the Flemish Nationalist and the other mainstream parties in Belgium.

So probably if we go forth to vote now, the electorate would be polarised and probably would react differently there as if we had normal elections in May. So definitely it is also crucial to know when we will have these elections, early or not. That might have an impact on the voting behaviour.

Sputnik: Who do you think could possibly replace the prime minister?

Professor Régis Dandoy: So for the moment the prime minister remains in power as the head of the government so we don't know for how long he can last.

In 2010 there was also a political crisis in Belgium and the prime minister that resigned then in power during one year and a half — so more than 500 days after having resigned because there was no agreement on the "who" would replace him — so we might end up in the same situation where there is nobody to replace the prime minister.

© AFP 2020 / Abdesslam MIRDASS
Right-Wing Activist on Strasbourg Shooting: 'The More Migrants That Europe Takes, The Less Safe Europeans Will Be'
So he just by default is staying as the prime minister of this chaotic government. So we might think about other options, for example, that the socialists have some candidate.

Former Prime Minister Di Rupo was…is a candidate to become prime minister. His party is larger in the Parliament so that would make sense but definitely we need to agree first on the coalition formation, on the formula for the coalition and then only we will discuss [about] who will be the next prime minister.

Sputnik: Can you elaborate a bit on the major issues that right now are responsible for the division that we are seeing in parliament and government?

Professor Régis Dandoy: The main issue is quite simple, it is migration. So the main Belgium party is Flemish Nationalist Party which is more right-wing and that made of migration its main electoral campaign issue.

They were in the June local election campaign and campaigned a lot about migration, about social security, about right-wing law and order issues. And that issue of migration and the migration compact is signature in the position of Belgium regarding the Marrakesh Treaty as we call it here or the UN Migration compact, is the cause of this crisis.

Sputnik: Would you say there has been a significant shift in the mood of Belgian voters? I mean have you seen this shift to the left or the right?

Professor Régis Dandoy: If we are talking about the regions in Brussels, so the regions that are mostly French-speaking, there has been no major shift.

But when we look at Flanders, Belgium's largest region, where we have the Dutch-speaking population, then we have on a long-term a move to the right. So the Flemish Nationalist are on the right, they are quite popular.

READ MORE: 'We Don't Want That for Brazil': Bolsonaro Vows to Exit From UN Migration Pact

The Flemish extreme right party is very popular also in Flanders. And there is the position of the other mainstream parties — liberals, Christian-democrats, even socialists — are a bit more to the right when compared to the French speakers.

So it is a long-term trend of moving more to the right and then it makes sense that this issue of migration polarises its base because it is at the core business of both the Flemish Nationalist and the extreme right in Flanders.

Belgium: Populist Rumblings in the Heart of the EU
Migration has been a taboo issue in Belgium for the last decades. Usually, parties do not discuss migration. Although we have an official position, we follow the EU on migration but we don't discuss because this is some kind of a Pandora box.

We don't want to discuss it because we don't know how the population will react. And now that the Flemish Nationalist put that issue on the agenda we see [the] reaction from the people, we see demonstrations in this streets, pro and against this compact and people are not taking positions on the migration issues.