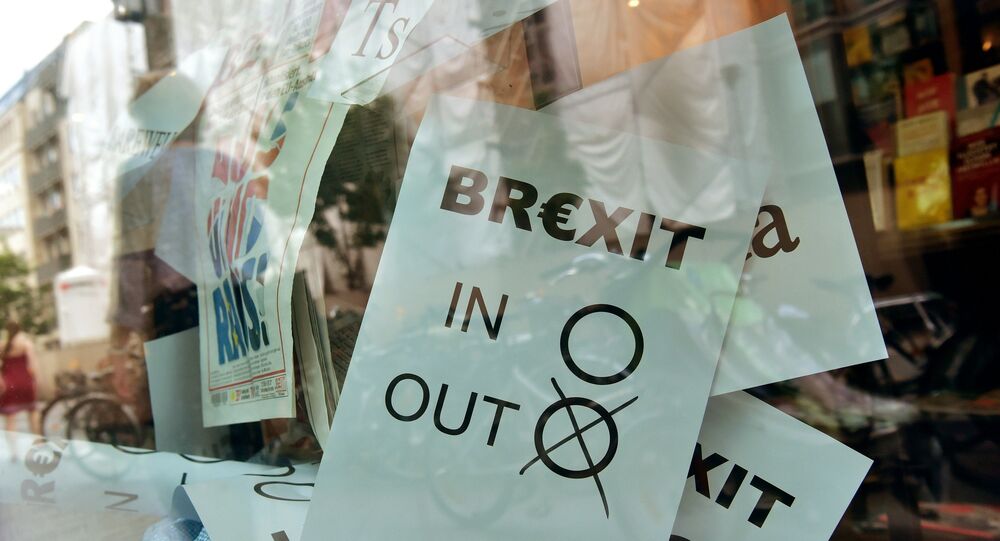 According to a Member of Parliament Nadhim Zahawi, British Prime Minister Theresa May will go to Brussels for new talks on the Irish backstop element of her Brexit deal with the European Union.

Sputnik: How surprising is the possible delay of the vote?

David Collins: I guess we shouldn't be surprised that she has delayed the voting as everybody knew that it wouldn't get through.

© AP Photo / Martin Meissner
'FRIT': Thatcher's Word for May as Parliament Blasts UK PM for Brexit Vote Delay
David Collins: I think what might have happened instead would have been if it had only sailed by a small margin then that could have been used by Theresa May perhaps as a leverage to go back to the EU the following week to say: "Look, there is this loss. Is there anything you can give me to win next time?" But she hasn't even gone that far which suggest to me that I think she realised that it would have lost by a very large margin. So this was a deal that nobody liked. It was [a] fundamentally weak deal. The question then is will the EU are for something substantive that she can take back to Parliament. But when I think is there likely an answer to that is that it doesn't look like they will because they have set all along that they won't. And the EU seem to be pretty shrewd negotiators and they have set their lines in offend in a way that the British never did. So I think that is probably wishful thinking.

Sputnik: Well, absolutely. I mean it was interesting once this deal was struck and then obviously the indifference through the media and various sources that the general feedback was that the whole Brexit agreement was an absolute disaster and it betrayed the whole electorate who voted for leaving the European Union. She did go onto those sources television to try to sell that deal, that was a little bit of support coming back away but maybe up to 10…15 per cent since she has obviously realised that it is not going to get through. Are we heading then, David, towards a no-Brexit deal then?

David Collins: Yes, that is the direction we are heading. Let's not forget that no deal is the default option. That is what will happen on March 29 or March 30 if there is no movement until then. That is the direction we are traveling. So the question is can an alternative deal be agreed before then or can there be an extension to Article 50? And I suspect the extension to Article 50 is also feasible. So I mean I think the most likely outcome now will be that it is going to be a no deal. And I have said it all along I don't think that it is going to be as problematic as many have suggested. I think we would be able to handle a no deal quite well. And I would say that if we get no deal, a year from now we will be looking back and saying "what was all the fuss about?"

Sputnik: Well, I tend to agree with you, David, but there has obviously been a lot of conjecture and a lot of scaremongering all along. I mean this [has] continued apace in the last sort of 6 to 8 months but on the other hand, you have got a lot of Brexiteers who are actually ramping it up and that they want a no deal scenario. They want it to get to that stage for Britain to show its steely hand and how are you going to take on that?

David Collins: Well, to be fair I don't think even the most ardent Brexiteers wanted no deal. What they wanted was a normal free trade agreement.

Sputnik: A lot of people, a lot of commentators, a lot of the public were stating that Theresa May had become a cowardice because of the fact that the willing this to allow such a — I mean it wasn't a soft Brexit — a superlight Brexit negotiated settlement to be enacted now. It looks as now common sense has prevailed in realising it can't get through. She has got a lot of pressure from… well, statements from Nicola Sturgeon saying [that] she is a coward to delay the actual vote. Do you think the actual electorate is going to applaud to Mrs May now and the fact that she is going to have a common sense [that] she has gone back to Brussels? Do you think they are going to show here support back towards her?

David Collins: Yes, it could quite possibly in its primitivism: cowardice is a nasty way of depicting it. That is just pure politicking. I would not be too motivated by those kinds of comments — it is primitivism. The deal would have gone through "let's see if we can get a better one" and if she can grate, she will come out as a stateswoman or statesperson. If she can't then obviously we [get] again a no deal — another politician. [For] I am not really falling there on that. I think perhaps the only thing I would criticise perhaps not being completely savvy in terms of expecting that she would be able to fool people and the spin that they have been trying to put on it the last few weeks. People trying to pretend like it was a good deal but really should have known better. And I respect loyalty and I can totally get that of people that want to be loyal to their leader, I can totally understand that. But they will never going to pull the wall over the British political and anyone that tried to argue that it was a good deal, really you have to wonder how sincere that was.