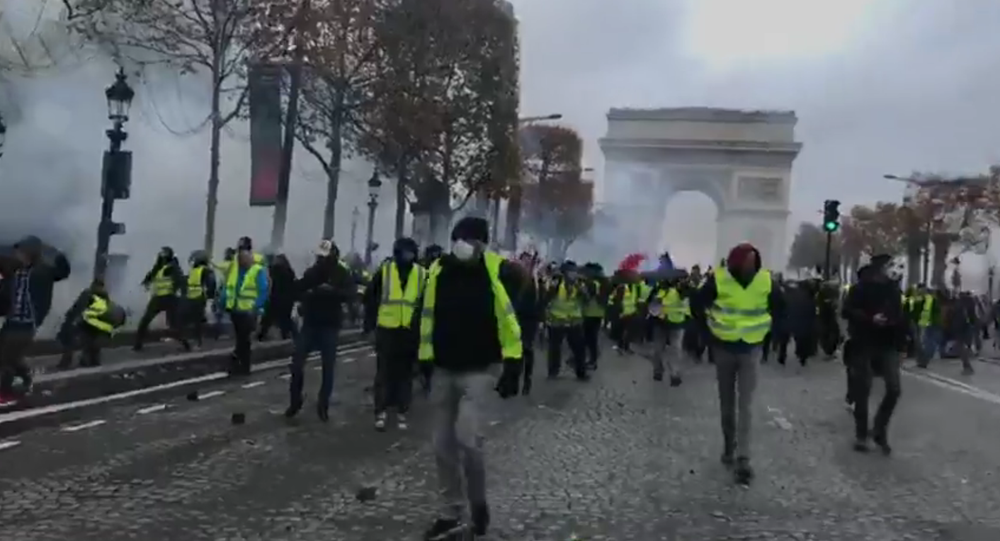 French President Emmanuel Macron is set to address the nation in response to rallies staged by yellow-vest protesters across the country. According to the reports, almost a thousand people were arrested during the protests, which have been under way since November 17.

Radio Sputnik discussed the protests with Gilbert Doctorow, an independent political analyst based in Brussels.

Sputnik: The protests that started as a response to fuel taxes hike turned into grand-scale demonstrations that hit not only France but other nations as well. Why has the protest movement amplified like this?

Gilbert Doctorow: Actually sitting here in Brussels we are one step ahead of France. We have leapfrogged France in the change of government mode but it is not the cause of the "yellow vets". We have a separate but not unrelated issue here over a populist widespread discontent with the elites.

In the case of Belgium, the government lost its majority and the Parliament when the Flemish nationalists pulled out over the issue of the migration convention going on Marrakesh which the Flemish nationalists, who constitute about a third of the Parliament, reject totally. But as I said the name of the topic is a bit different: it is not about the cost of living, it is not about "yellow vests". But it is populist discontent with what Belgium has in common with France and we now have a minority government which can fall at any moment.

Sputnik: Now we know the French Finance Minister said that the process will entail a new slowdown of economic growth. How realistic are such prospects? I mean I have seen these views of these protesters week after week destroying central parts of the capital. Is it going to have an adverse effect on local businesses and all facets of international business? So it is correct in many assets, what is your take? Whose fault is it?

Gilbert Doctorow: He is correct but he is putting a political spin on it that is unacceptable.

Gilbert Doctorow: The problems in France didn't begin four weeks ago. There have been widespread strikes and resistance to government so-called reform measures which had as their common denominator to destroy the unions and to claw back the power in the economy to the business classes and a business centred government. So the latest most phenomenal demonstration of discontent has been the "yellow vests" but the damage to the economy could [have been done] considerably earlier and is ongoing. As we will see tonight what Mr Macron says but I am very doubtful to this any concession, specific concession that he can make full stop the protests because the protests have as their purpose now to ensure his removal from office.

Sputnik: It is very interesting what you are saying here because from my reading his popularity has now dropped to 20 per cent. He was the key-leading parliamentarian president to take over the mantle of Angela Merkel. I mean that's in tatters now. And what are you expecting Macron to be saying tonight to say if his particular situation at the moment is in a very challenging position with regard to this? He is obviously gone back on his commitment not to change his policy. He has stopped the increase [in] pricing of this fuel tax. That is going back on his determination from last year, were you expecting from him, Gilbert?

Gilbert Doctorow: Well I don't think there is anything we can say that will change the course of protests because it is asking him to change his personality as well as his policies. Policies can be changed or they can be put on hold. Personality cannot be changed from one day to the next. [Also] you have to consider that this is a man who came into office with no political experience of elected office. His first elected position in the French government was the one he holds today. So he is not a man who has any experience of compromise or with building confidence with the people at large.

READ MORE: France Protests: 'It's an Escalation Macron Has Struggled to Understand' — Prof

Sputnik: Who do you believe then is going to be in the position to attempt to rise amid Macron's predicament and how capable are these prospective leaders to follow in his footsteps?

Gilbert Doctorow: Mélenchon on the left and Marine Le Pen on the right have every reason to jointly profit from this if they can ever shake hands, which is in Europe much harder to imagine that common sense would tell you should happen. So, yes, (if) the populists on both sides of this political spectrum have a chance if they could possibly join forces. The well-known politicians in France are all discredited. They either are discredited because they "fell on the wrong knife" so to speak or on the "wrong swords" like Sarkozy or with his Gaddafi problem.

It's safe to say that he would enter office today, considering that he is lucky that he is not in a conventional prison that is given the charges that are still pending against him — I think it is missing the point for Sarkozy.

However, when you look at Fillon who was the sure winner of the election until he was brought down very, very much as Strauss-Kahn was brought down five years previously probably with outside meaning US interference, he is not a name. So where are the names in the French centre? They don't exist, which leaves you with the poles: the right [and] the left poles of radical populists.