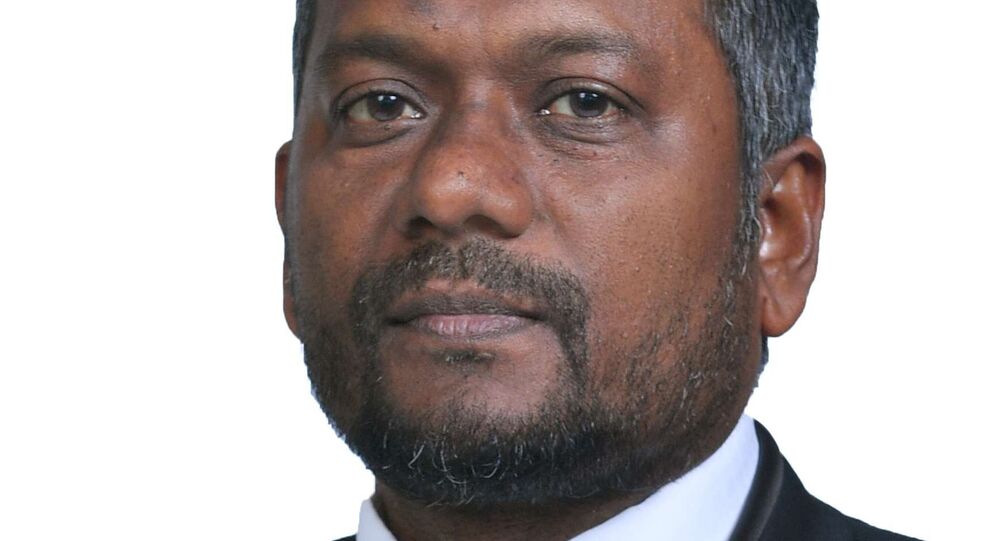 Fayyaz Ismail, newly appointed Minister of Economic Development of the Maldives says the country is now looking forward to deregulating trade and industry, and creating an environment conducive for foreign investors.

New Delhi (Sputnik) — A three-member ministerial delegation of the government of Maldives was in New Delhi recently to reach out to its "natural and time-tested" friend India to pursue reinstatement of economic ties as well as to seek help in bailing out the island nation's economy from budgetary constraints.

The delegation equivocally reiterated that it wishes to restart global engagement without constraints after the unseating of a "China-friendly" government.

Sputnik has spoken to Fayyaz Ismail, Minister of Economic Development, and government of Maldives on the Indian Ocean island's views about engaging different stakeholders in its economic reconstruction plan against the backdrop of media reports suggesting that the country is heavily in Chinese debts, the volume of which hat yet to be ascertained.

Sputnik: The change of regime in the Maldives under the leadership of President Ibrahim Mohamed Solih is being seen as not just a political change but also a milestone in the economic and global engagement priorities for the Maldives. Please elaborate.

© CC BY-SA 3.0 / Shahee Ilyas / Malé, capital of Maldives
Maldives Seeks Indian Assistance in the Face of Mammoth Chinese Debt
Fayyaz Ismail: The Maldives is looking ahead for economic engagement with all. We are a small country of around 400,000 population and we are looking ahead to correct and build whatever has been lost in the last five years. We are here in India to extend our invitation to Indian companies to take part in this reconstruction process.

Sputnik: Please tell us more about the Maldivian economy. What does it offer to the world?

Fayyaz Ismail: We are a country with around 40 percent of the youth population and we offer to the world an unmatched tourism destination. Ours is a majority tourism linked economy while we are eagerly looking at global players in human resource development, information technology, skill development, etc. to come and avail themselves of the opportunities available for them in the Maldives and help us enhance our human skills.

We pioneered the climate change discussion across the globe around two decades ago and we think that the Maldives can still play a tangible role in letting everyone know the impact of climate change.

© AFP 2020 / Munir uz ZAMAN
Indian PM to Attend Swearing-in Ceremony of Maldivian President-Elect
Sputnik: Your government has been sworn in at a time when the global economy is hit by the tremors of the trade war between major economies and there is also the increasing trade of trade sanctions and embargoes. What are your views on this?

Fayyaz Ismail: We believe in open economies and we trust and support the fact that trade should be facilitated all around. Our last government failed because they tried to play one friend against the other. We are still to estimate the impact of those policies. The last five years resulted in the deterioration of our position in the world. We are now looking for change by engaging every player.

Sputnik: Of late, there have also been a lot of talks around currency swaps, de-dollarisation. What is Maldives' stand on this?

© CC BY-SA 3.0 / Shahee Ilyas / Malé, capital of Maldives
India Watches Maldives' Transfer of Power with Fingers Crossed
Fayyaz Ismail: Our priority is to look for means of facilitating trade and investment in the Maldives and hence at this moment we do not reject the idea outright. We will definitely look for such options if available in the future.

Sputnik: Your press conference in India dealt widely with India's role in rebuilding your economy. Your cabinet colleagues also asserted engaging India would not really mean rejecting the role of China which has been of help to the Maldives in the past. Similarly, what role do you see for Russia?

Fayyaz Ismail: The Maldives is a favourite destination for a huge number of Russian tourists. And we also have some investment in small quantities in a few sectors. We are looking forward to more engagements, especially on the economic side.

We have to look at more ways to increase arrivals from Russia and also we wish to build up more engagements to make the Maldives more available to Russian investors and entrepreneurs.