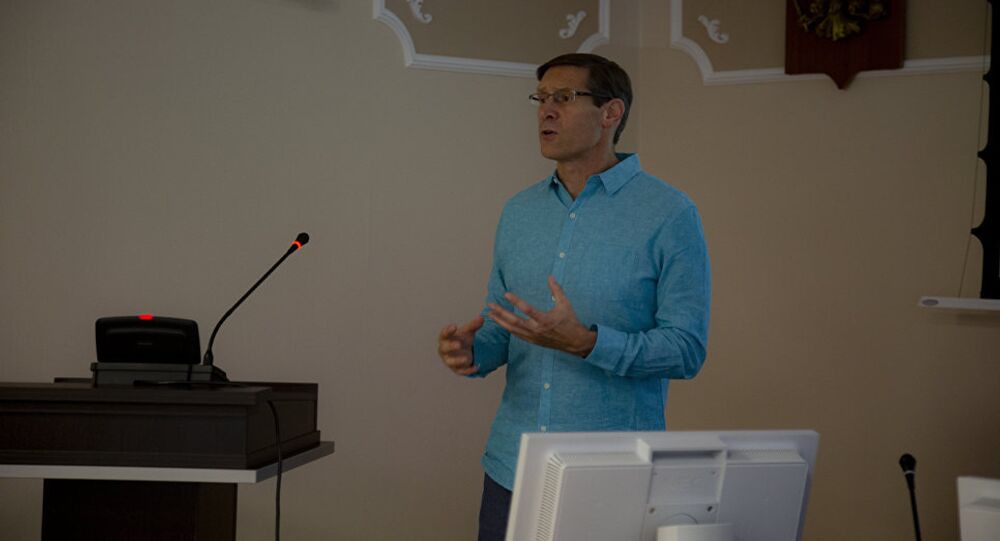 Physicists from a whole range of countries have gathered at the National Research Nuclear University MEPhI to discuss the sPHENIX international experiment. The aim of this rather ambitious project is to conduct research in the field of high-energy physics and heavy ions using a new unit.

Sputnik: Professor Lajoie, what exceptionally fresh opportunities will sPHENIX open for science compared to its predecessor?

© East News / Martial Trezzini/KYSTN/MBER102
Large Hadron Collider Upgrade Poses No Risks of Black Hole Creation, Earth Collapse - CERN
John Lajoie: Of course, sPHENIX is designed to thoroughly study the microscopic properties of quark-gluon plasma. So, one of the things we are interested in is the following: how do the long-distance, long-waving properties of this new state of matter come from its microscopic properties, from quarks and gluons. To bridge that gap, that's when we talk about things like quasi-particle excitations in the quark-gluon plasma.

If you think about the facility where sPHENIX runs at, RHIC, the Relativistic Heavy Ion Collider, I like to think of that facility as really being similar to a laboratory for strong interaction physics or quantum chromodynamics, which is the name of the interaction between quarks and gluons.

© CC BY-SA 2.0 / UNCTAD / Prof. Samuel Ting, Nobel Laureate,Department of Physics, MIT
From Collider to ISS: Nobel Winner Samuel Chao Chung Ting on His Experiments
And in addition to looking at nucleus collisions, the facility also has the ability to look at proton-nucleus collisions and there, it's a really exciting companion to looking at nucleus-nucleus collisions because when a big nucleus collides with a big nucleus that's when you create the conditions actually required to develop the quark-gluon plasma. So, those two are focused on the understanding of this hot-dense strongly interacting yet perfect liquid. Needless to say, it's those studies that I also find so exciting.

The other way to look at this is to see what happens if I take the fundamental object of quantum chromodynamics, which is the proton, and I try to understand how the proton is put together. Instead of looking at something big, we look at a small thing but we try to understand in detail how it's put together. So RHIC is the only collider that can do polarized proton-proton collisions in the world. So the ability to look at polarized proton-proton collisions is also very exciting.

© Sputnik / Sergey Pyatakov
China to Build World's Largest Supercollider
John Lajoie: It's a super question and I think the beauty of it is we simply don't know. So the analogy is if you were to go back to the year 1865 when James Clark Maxwell pulled together Maxwell's equations and Maxwell's equations were really the first point when men mastered the level of understanding of fundamental interaction of nature. Maxwell's equations are really a complete picture of this and how electrodynamics works at a classical level.

You can ask somebody in 1865: "Hey, now that you've done this, what is the world going to look like in say a hundred years?" Do you think they would have predicted that we would go to the Moon? Do you think that they would have predicted computing and semiconductors? No, right? They wouldn't have probably been able to even predict a sort of modern electrical power-based society because it hadn't yet been conceived. Yet all of these things came from mastering one of the fundamental forces in nature. But the revolution that came from understanding electrodynamics was one of the most profound revolutions in human history.

READ MORE: Writing on the Wall: 'God Particle' May Destroy the Universe — Scientists

So I don't know what will come of developing an understanding and ultimately mastering the strong force. But the revolution that came from understanding electrodynamics was one of the most profound revolutions in human history. So I'm confident that it will be just as exciting if not more so. So where will we be in terms of nuclear science in 100 years, 150 years or 200 years? I really can't say. But I'm really excited to find out.

Sputnik: Experiments like sPHENIX collaboration require that scientists from all around the world collaborate and of course a huge amount of money in need. For example, CERN created the Internet as we know it. Can we say that it is an investment in the future of mankind?

John Lajoie: So, the Internet was an unanticipated spin-off of the investment in particle physics. Nobody was able to predict that, gee, if I take these really bright people and I give them the resources to attack some of the most complicated problems in understanding the world, this spin-off will come, the internet which is again just another revolution in our society. It's a complete sideline from that effort.

So as academics, we tend to think a lot about our students and our research as well as how our students in postdocs will carry on our research. But they do not necessarily go on to study physics.  They go on to do many other things. Ultimately, these same people's contributions have really made a difference in the life of society today.

But training technical people in universities around the world who then go on and use their critical way of thinking and critical problem-solving skills in other fields is one of the drivers of the modern economy in most developed nations.

Sputnik: You know, I heard something like that from one of our older scientists who said that MEPhI is not teaching how to solve something but how to think.

John Lajoie: That's banging on. And that's something I tell all of my incoming freshman students, that they're not there to learn physics. They are there to learn how to think. They're going to learn some physics as a byproduct. But they're there to learn how to solve problems. And many of them don't realize when they're just starting out as undergraduates that they don't have the skills to systematically attack complicated problems. But when they get those skills, those skills apply everywhere and to everything.

Sputnik: So, in order to obtain quark-gluon plasma, scientists need to achieve temperatures that are 80 times higher than the Sun. Which conditions are you planning to achieve in the sPHENIX project?

© AFP 2020 / FABRICE COFFRINI
Large Hadron Collider Upgrade Starts Amid Hopes to Upend Universe Theories
John Lajoie: So, we're not planning to change the conditions under which we create the [quark-gluon] plasma. That's driven predominantly by what you collide, what you have in the nuclei and the energies at which you collide those nuclei. So the energy of the machine is going to be the same. And because RHIC commences at not as high a temperature [as LHC], you can spend more time in that quasi-particle region.

So we think that RHIC is actually at the sweet spot for studying the kinds of physics that sPHENIX wants to study. And comparing studies at RHIC and studies at the LHC at much higher energies, there is a lot of complementarity between these two. So we really actually need both but RHIC, we really think it is the sweet spot for studying that physics [heavy ion collisions under certain conditions].

Sputnik: How are you associated with Russian physicists in general?

John Lajoie: I know many-many Russian physicists through my good friends from the Brookhaven National Lab. So when I joined PHENIX as a young professor back in 1997, I met a lot of really smart and talented people working on PHENIX. So this collaboration, in general, has been very fruitful.

Question: What about MEPhI? Perhaps you want to see MEPhI students in PHENIX working on your data?

© CC0
Russian Scientists Learn to See Through Ground
John Lajoie: Absolutely. That's one of the primary reasons that we're here. We're trying to find ways that MEPhI can get involved in the construction of the experiment. Something that every professor knows and always talks about is "all the hard work is really done by the students." So when it comes to analyzing the data, calibrating the detector, doing all of the really hard work of understanding what the detector is trying to tell us, all that hard work is done by students. And we never have enough good high-quality students.

One of the things that we'd really like to do in the long term is to provide an opportunity and find a way to bring as many students as possible into sPHENIX and have them participate in the analysis of the data.

The views and opinions expressed by John Lajoie do not necessarily reflect those of Sputnik.