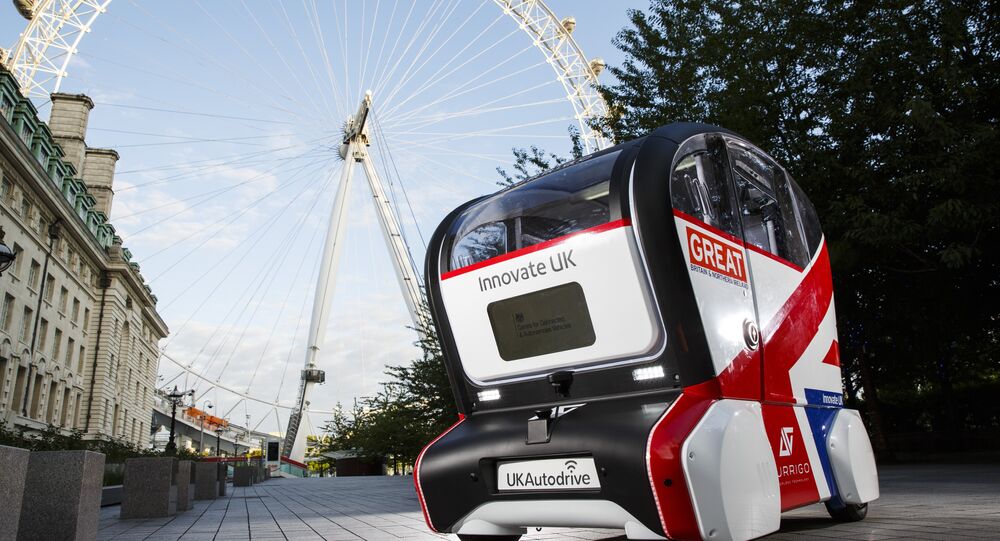 The race to build a future of self-driving cars has ramped up, with multiple companies such as Jaguar Land Rover, Tesla, Toyota, and others joining in and UK private transport firm Addison Lee reporting last month that driverless cars will become a regular phenomenon by 2021.

Sputnik spoke with Miles Garner, sales and marketing director at Aurrigo, a division of the RDM Group that creates last-mile transport designed to operate in controlled environments. Mr. Garner holds over thirty years of experience within the automotive, telematics and consumer electronics industry.

Sputnik: What was the inspiration behind your Devpod CAV platform?

Miles Garner: The Devpod is our platform vehicle offered to universities and companies wishing to integrate their own autonomous control systems, which is a different product than a traditional pod system that comes with its own systems.

We have removed our own autonomous vehicle platform from the Devpod, which enables others to work with their own systems quite easily, with our signature pod being the PodZero model.

Sputnik: The UK Autodrive programme concluded last month in Milton Keynes and Coventry. How successful were trials and which challenges did you face over the last 5 years?

Miles Garner: UK Autodrive was the largest of all government trials funded with roughly £20m ($25.7m), and was conducted with RDM and twelve other companies to tackle autonomous road driving and small pods, which we were involved in.

We provided a number of pods which took people on the last-mile part of their journeys and trials concluded after three years in October this year.

We learned feedback from pedestrians early on, who changed from nervous and reticent of the new technology to taking it for granted and hardly noticing the pods by the campaign's end.

It was more of a campaign to spread awareness, in addition to testing how pedestrians and pod users would react to them.

Sputnik: What are some of the greatest benefits to using CAVs? Who makes up your largest customer bases?

Miles Garner: We target last-mile transport, which is off-highway, in controlled environments and low-speed around roughly 8-10 mph in areas where pedestrians operate.

Typically, our targets are councils, large shopping malls, universities and tech campuses as well as aged cared community centres, which we have trialled in Australia and the United States at facilities there.

We are also trialling more towns and cities. In the news yesterday, the mayor of Paris is aiming to close large central areas within the city to automobiles, so there is a growing demand for last-mile transport, including places aimed at ageing populations and those with disabilities.

Sputnik: Which British companies have joined the CAV movement? How do they plan to implement their own driverless tech?

Miles Garner: Passenger vehicles (M1) and original equipment manufacturing (OEM) companies are trialling multiple vehicles around the world. We work closely with Jaguar Land Rover who have been a customer of ours for 25 years and have been working heavily in this area.

Connected Autonomous Vehicles on roads are much harder to achieve, whereas last-mile vehicles operating in controlled environments are much easier.

When the average person is driving a car at much higher speeds, you are in an environment that is much harsher to crack. We are leaving that to more OEM companies who have got larger budgets to plan this field.

Trying out the @WestMids_CA driverless pod developed by @aurrigotech. Journalists or #cpc18 visitors who want to give it a try and see the technology we are developing here in this region and which the ministers keep mentioning in speeches, it’s down on Broad Street. pic.twitter.com/7tZEnc19Xp

You will see greater proliferations of mass market vehicles operating at the last-mile like ours, with our sector being the first to properly establish itself and M1 roads who will carry on testing.

You may also see companies launching more cars with greater autonomy, but we are still far off until we see more mass-market applications of CAVs on roads.

In our field of controlled environments, customers are actually placing orders to operate the pods on their facilities. So, in the next two years, you will see a lot more autonomous vehicles in the last-mile sector.

The views expressed in this article are those of the speaker and do not necessarily reflect Sputnik's position.