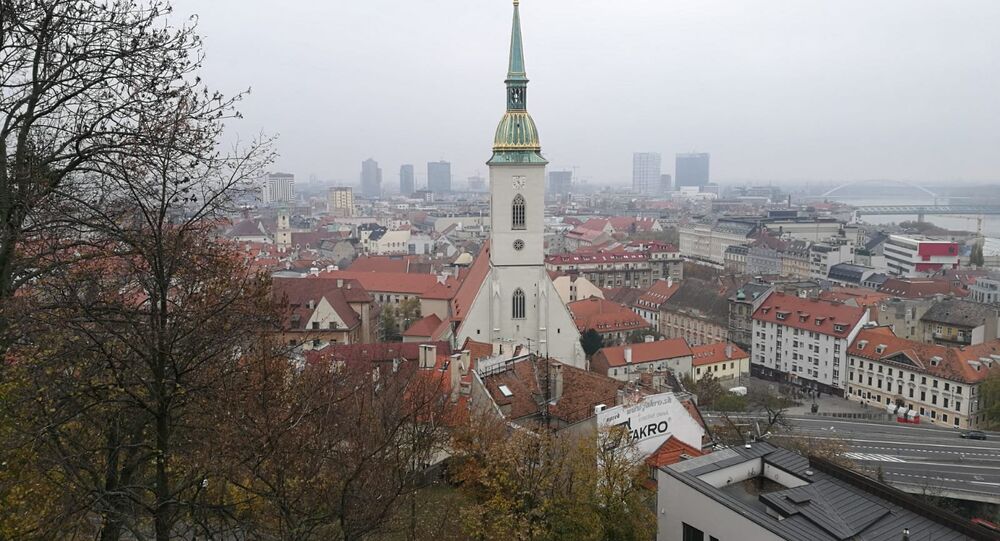 Across Borders: What is St. Martin's Day and Why Do Europeans Celebrate it?

St. Martin's Day, or Martinmas (Mass of St. Martin), Old Hallowmas Eve, and The Feast of St. Martin is colloquially referred to as the "European Thanksgiving" across Europe, including Austria, Germany, Czech Republic, Denmark, the United Kingdom, Ireland, Sicily, Poland and many others.

The holiday began in France and spread to Great Britain, Scandinavia, Germany, and later Eastern Europe, and honours the life of St. Martin, who died on November 8, 397 AD and was widely considered a patron saint of the poor, children and homeless.

Conversely, St. Martin's Day also marks the final moments of the agricultural harvest and slaughter of livestock and coincides with the Centenary of WWI Armistice Day this year, with many countries merging the celebrations in a mixture of poppies, wines and local traditions.

"St. Martin lived during the 4th century and is very popular in Slovakia," the spokesperson said. "Many churches are consecrated and dedicated to [him], including two cathedrals."

"St. Martin was a Roman soldier, then a monk and then a bishop," the spokesperson continued. "We honour this patron during St. Martin's Feast on 11 November and this cathedral has been consecrated in St. Martin's name, whom is the patron of this diocese."

According to legend, St. Martin of Tours was a Roman soldier praised for his acts of kindness after tearing off half of his cloak to clothe a beggar walking the street. Later, St. Martin received a premonition of the beggar, who revealed himself to be Christ and said "Here is Martin, the Roman soldier who is now baptised; he has clothed me."

The spokesperson continued on the significance of wine, stating that "when you are making wine in November, you can receive the first batches."

"That is why it is a tradition that these young wines are blessed during St. Martin's Feast."

At the same time the first wines of the autumn are poured, Slovaks paid their respects both to fallen soldiers and the fall of the Austro-Hungarian Empire, which also dissolved following the Armistice in 1918.

"It was just a coincidence that St. Martin's Day and Remembrance Day are celebrated at the same time," the spokesperson said. "We rang the church bells today to commemorate the Centenary of the WWI Armistice and had some special celebrations related to it, including visits by ambassadors from Britain and Germany."

Maroš Plitko from the Bratislava Tourism Board spoke to Sputnik about how his organisation supports the St. Martin's Day festival via promotions and public relations, in addition to facilitating performances commemorating the coronation ceremony of Bratislava.

For visitors, "it is mainly wine tasting event," he said. "The purpose of St. Martin's Day is about taking the time to taste young wines produced this year," with many Slovakian winemakers showcasing their youngest wines, he continued.

He explained how the event featured a "variety of musical and artistic performances, events for children and a holy mass at St. Martin's Cathedral," where the Archbishop "blesses the young wine from local winemakers".

"A statue depicting this story is situated in the St. Martin´s Cathedral," he continued, adding that "this time of the year is also connected with celebrating young wines — also called St. Martin´s young wines."

Another of Bratislava's Old Town specialties "includes an excellent gastronomic experience" of roasted ox, he added.

Many tourists try local street foods such as Pozsony crescents, which are handmade from local bakers and can only use poppy seed or walnut-based fillings, in addition to lagose, or fried breads served with cheeses and sauces.

The goose is widely associated with St. Martin's Day because Martin tried to hide in a goose pen to avoid becoming an ordained priest, but was later found after geese began cackling around him.

Slovaks also pride themselves on wines from the Small Carpathian Region, a route of several cities-Svaty Jur, Pezinok, Dubova, Casta, Vino-Sady, Modra and others-which house some of the finest wines brought to the festivities.

A programme devoted to the Bratislava coronation ceremony features an ensemble of artists and performers showcasing "horses, traditional dancers in costume, fire shows and commemorations at St. Martin's Cathedral" and others, he continued.

As an event partner, we support the festival via promotions, PR and ‘Discover the Coronation History of St. Martin's Cathedral in Bratislava' programmes on Friday and Saturday," he said.

In addition to promoting the festivities, the Tourism Board will set up infrastructure, assist visitors at tourism information centres, and develop promotions with the Bratislava Convention Bureau and other partners and stakeholders, he said.

The Board also promotes events via its main webpage and social media, but focuses on two huge markets-Germany and UK-twice a year.

Remembrance of Nationalism and Communism

Another feature of St. Martin's Day was, coincidentally, honouring Slovakia's divided history straddled between nationalism and Communism, with both systems springing from events following the WWI Armistice.

A monument situated at the bottom of Devin Castle in southwest Bratislava near the Moravian River pays homage to the demarcation point of the Iron Curtain, which partitioned Warsaw Pact countries from Western Europe.

The Confederation of Former Political Prisoners erected the monument to help future generations remember the sacrifices of nationalists killed at the Czechoslovak Republic border. Nearly 400 men and women were shot at the border during the "Communist Terror" period.

"The Iron Curtain used to stand here. It cannot be pulled away. In can only be cracked," the plaque reads. "Four hundred people sacrificed their life while fighting for their rights."

© Sputnik / V. Uvarov
Ten Must-Watch Anti-War/War Films for Remembrance Weekend
"Do not forget that freedom of thinking, acting, and dreaming is a value that is not only worth living, but also bringing sacrifices," it continues.

In the northwest, Slovaks also paid respects to fallen soldiers from the Red Army at the Slavin Memorial Monument. The colossal monument features socialist neorealism and houses hundreds of granite plaques with the names of slain Red Army soldiers and officers who died in Soviet hospitals during the Civil War.

Designed by Ján Svetlík, it was opened to the public in 3 April 1960 to commemorate 15 years after the city's liberation from Nazism.