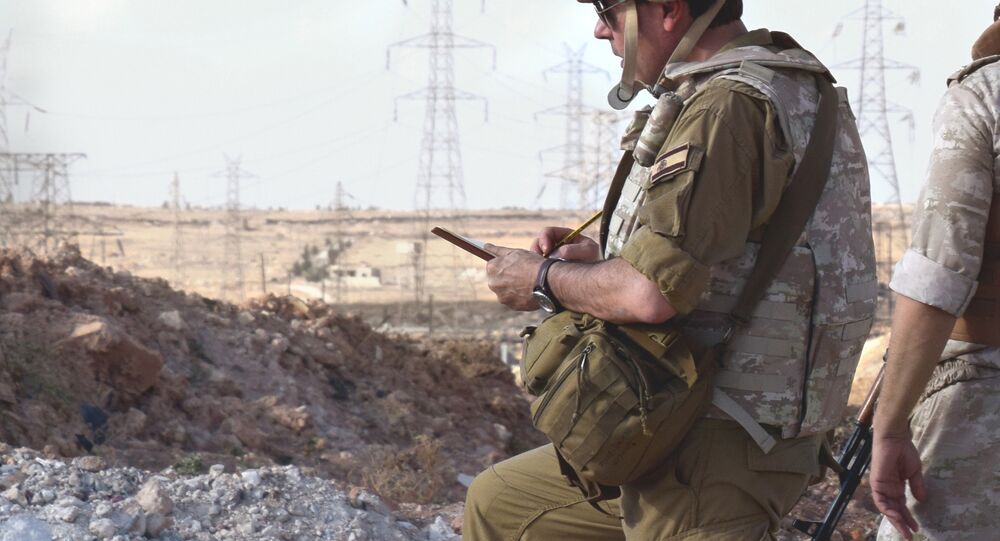 Spanish Battle Painter in Syria: 'With the Russian Army I Felt at Home' (PHOTOS)

Augusto Ferrer-Dalmau Nieto arrived in Syria on September 29 with Russian soldiers. Instead of a rifle, the Spanish battle painter had a much more powerful weapon in his hands – a notebook where he made sketches that would later become a painting reflecting life in Aleppo.

"The idea of going to Syria was born about a year ago when I was invited to visit the Grekov Studio of War Artists in Moscow. There we talked about my experience of painting in war zones in other countries, and I said that I wanted to know Russia and the Russian soldiers. I also mentioned my desire to paint Syria," Ferrer-Dalmau Nieto explained to Sputnik.

So, the Russian Defense Ministry invited the painter to come to Aleppo. That was his chance to witness the Syrian War with his own eyes.

According to Augusto, he didn't have a single idea of what he was going to see in Syria. Probably, his open mind and optimism were one of the reasons he managed to get on with the Russian soldiers, whom he still remembers.

"It has been very nice. It was really interesting to live in a military camp, especially in a Russian one. There hadn't been any foreigner to live in the camp with the Russian army before."

With his experience, the painter has been able to take a new look at the myths about the Russian army. According to Ferrer-Dalmau Nieto, the "villainous and grotesque" Russian soldiers are just a Hollywood invention. In fact, they are "very disciplined, orderly, nice and attentive people."

"I saw many soldiers read, and it's not something I'm used to seeing," the painter said, adding that he felt very safe with the soldiers. Augusto admits that he had previously felt like that only when he was accompanied by Spanish soldiers.

"I felt at home as if I was with the Spanish army. It was exactly the same feeling," Ferrer-Dalmau Nieto said.

He also added that the Russian Defense Ministry has decorated him with a medal for service in combating international terrorism.

Ferrer-Dalmau Nieto got up with the Russian soldiers, had breakfast with them and went where they went. They ate where they had a chance to eat; sometimes, on a Russian base. "I used to line up with the soldiers, with my tray, like any soldier," he noted.

In turn, the soldiers accompanied Augusto wherever he thought there would be material for his work. After a few days, he understood what his painting should look like.

Ferrer-Dalmau Nieto spent ten days in Syria. His canvas should mirror all the horrors of this war, which has been ongoing for seven years, and, above all, to show people to overcome their fears and to create "a human image" of what the mission of the Russian army is.

The painter says he hopes his finished work will show both the chaos of the war and everything the Russian army is doing for the civilian population of the country.

The painter used his notebook not only to sketch but also for "schemes and notes" about those things that caught his attention to remember them when he returned to Madrid. He also took pictures of some details, buildings, and soldiers.

Although Augusto already has a general idea for the two-meter-wide canvas, he still has to look through thousands of photos, papers and other materials that he has at home.

Ferrer-Dalmau Nieto has been to Afghanistan twice — first with Spanish troops, and then with Georgians and Americans. The battle painter has also been to Lebanon and Mali with the EU, NATO and the UN

According to Augusto, all the missions are similar; it's "the people" that change.

"I want people, to say when seeing the canvas: ‘Look, that's what Aleppo was like 100 years ago.' My work is a historical document," the painter points out.

© AP Photo / Lefteris Pitarakis
Daesh Attacks Refugee Camp in Syria, Take Hundreds Hostage - Russian Military
The work will take about eight weeks; but before that, Ferrer-Dalmau Nieto has to look through all his materials. Thus, the canvas won't be released until May 2019. Augusto wants the canvas to remain in Russia, because "it's part of the country's history." However, the painter would like the painting to go through other countries before finally staying in Moscow.