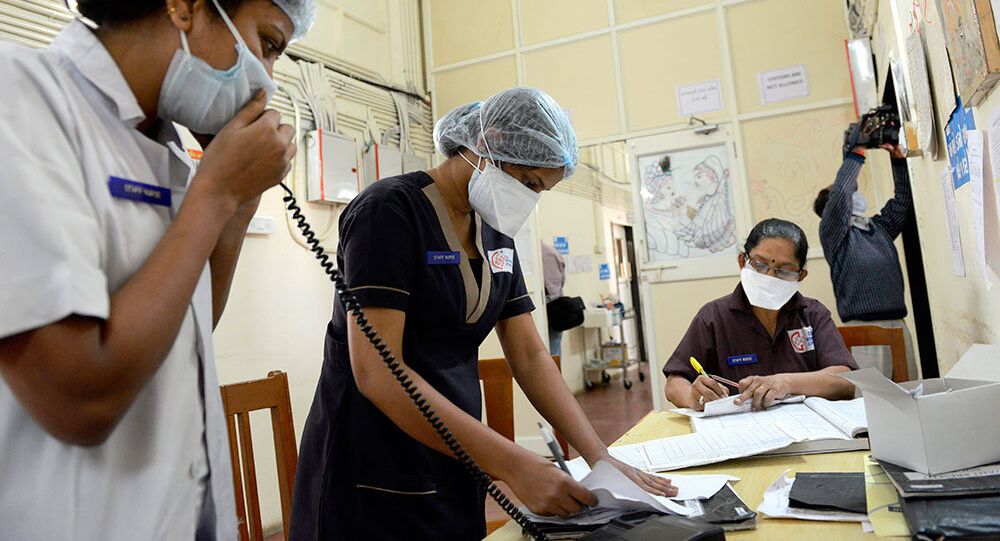 Indu Bhushan, CEO of India’s Pradhan Mantri Jan Arogya Abhiyan, also dubbed as "Modicare," says the ambitious scheme would not be a burden on the exchequer, as suggested by critics. The scheme is aimed at providing cashless health insurance to almost half of India’s population.

The Indian government on Sunday launched the world's biggest health insurance scheme, which would cover some 500 million poor people (almost half of India's population). Prime Minister Narendra Modi, who is set to face general elections early next year, handed medical cards to the pre-identified beneficiaries in the eastern state of Jharkhand, which is one of the most socio-economically backward states of the country.

Dubbed "Modicare," the program promises health cover worth INR 500,000 ($6,900) to every poor family for the treatment of serious ailments. While launching the scheme in Ranchi, the state capital of Jharkhand, Prime Minister Modi said that the Pradhan Mantri Jan Arogya Abhiyan (PMJAY) is being given different names by people, like "Modicare," but for him, it is an opportunity to serve the poor.

Estimated to cost around $1.6 billion a year, it covers 1,354 medical and surgical packages categorized under 25 specialties, such as cardiology, neurosurgery, oncology (chemotherapy for 50 types of cancers) and burns, among others. Patients can't avail surgical and medical packages at the same time.

© Sputnik / Sergey Guneev
Modi's Fight Against Pharma Lobby Helped Indians Save $1.7Bln – Minister
The scheme is expected to provide a big boost to the political fortune of the ruling Bharatiya Janata Party (BJP) as public healthcare system in India has been a thorny issue with a large section of the population (living on less than $2 a day) falling into debt, unable to bear the burden of treatment at private hospitals.

To implement such a huge healthcare program successfully, the Narendra Modi government has bestowed confidence upon Indu Bhushan, a senior economist and bureaucrat who has served at the World Bank and the Asian Development Bank. Bhushan was called back to India by the Narendra Modi government this year as chief executive officer of the scheme. Sputnik's Rishikesh Kumar spoke to Bhushan and discussed the challenges in rolling out the world's biggest health insurance scheme and the roadmap to counter those challenges.

Sputnik: Identifying beneficiaries has been the biggest challenge in implementing welfare schemes meant for the poorest section of Indian society. How do you plan to tackle this challenge?

Indu Bhushan: We have already identified 100 million out of the total 107 million families who are the intended beneficiaries of the scheme. We have started registering them under the insurance net. We have also devised an application that will help in the registration of beneficiaries. A strong digital barrier will help eliminate the possibility of fraud.

If we are to track the details of 500 million people, we will have to depend on digital platforms. There have been complaints of fraudulent beneficiaries in other welfare schemes, but I am very much confident that there will be no such problem with this scheme.

© Sputnik / Sergey Guneev
Are You Listening, Washington? India Launches Universal Health Care
Sputnik: Private hospitals have expressed their inability to join the program, citing unviable pricing of the insurance. As over 60 percent of the healthcare service is provided by the private sector, do you consider this as a major roadblock to the success of the historic program?

Sputnik: Some states of the Indian federation have refused to become part of the scheme. What has been your approach towards those states?

Indu Bhushan: It is true that some states are yet to give their consent, but we will be talking to them. The objective is to bring all the states in India under the umbrella of a single health scheme. We are striving to eliminate the concerns of those states, be it regarding the funding or any other concern for that matter.

© AFP 2021 / SAM PANTHAKY
India Announces Penal Punishment For Medics Who Underreport TB Cases
Sputnik: Many people are saying the government does not have sufficient funds to run this kind of insurance program for years. What do you have to say to that?

Indu Bhushan: There is no concern whatsoever regarding the funding.

The money needed for rolling out and implementing the scheme has already been allocated. Because this is the most important and historic program for the benefit of the public, I do not think garnering funds for this noble scheme will be a problem in the future also.

Sputnik: Have you formulated any innovative mechanism to generate revenue for this scheme so that it does not run out of funds and does not become a burden on the exchequer?

Indu Bhushan: We have not thought about such a mechanism as of now. But the government will definitely find a way to make this program successful in the long run as well.

Sputnik: Primary care has not been included in the scheme. What is the reason behind this?

Indu Bhushan: Primary healthcare has not been included in this insurance scheme. But the second part of the program will have a major focus on primary health care.

© AFP 2021 / SAM PANTHAKY
India Launches 4 Cent Biodegradable Sanitary Pads Under Public Health Scheme
That would cover around 1,300 medical and surgical packages categorized under 25 specialties such as cardiology, neurosurgery, oncology, burns, among others.

Sputnik: Indian Prime Minister Narendra Modi has announced that in next four years, the government will establish over 150,000 wellness centers which will provide free test facilities and treatment of simple ailments. For this, you would require a large amount of money. Has the government already allocated funds for the establishment of such centers?

#AyushmanBharat to be World's largest Health Insurance Initiative: Provides comprehensive health coverage up to Rs 5 lakh per family per year, to around 50 crore people. pic.twitter.com/JhWWASud16

India May Be Staring at a Potential Mental Health Crisis