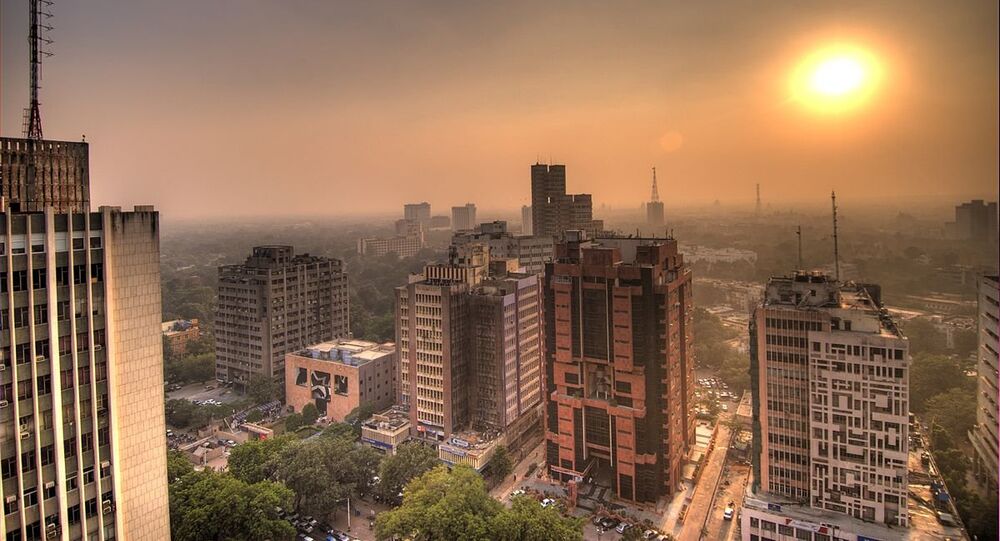 The head of an Indian government policy think tank said that despite the Modi government’s focus on the localization of manufacturing and export promotion, India has been firmly committed to liberal trade policies combined with structural reforms that enable businesses to become more competitive.

New Delhi (Sputnik) — Amitabh Kant, CEO of the National Institution for Transforming India, which is the premier policy think tank of the government of India, in an exclusive interview with Sputnik, shed light on a range of issues pertaining to India's economic programs and outlook.

Sputnik: What in your opinion would be a possible impact of the ongoing trade war between the US and China on India. Do you foresee some upward movement in India's exports to the US?

Amitabh Kant: Recently, many major economies have been turning inwards and following a more protectionist approach to trade. Contrary to this trend, India has been following a liberal and an open approach towards trade, underpinned by structural reforms to enable businesses to become more competitive.

© Sputnik / Ruslan Krivobok
Immense Opportunities in India For Aeroflot – Aviation Consultant
In order to boost growth in exports, the government of India has launched major initiatives. Twelve champion service sectors have been identified through which efforts will be concentrated to increase India's service sector exports from 3.3 percent in 2015-16 of global services exports to 4.2 percent in 2022 of global services exports.

These measures, coupled with the development of clusters and coastal economic zones, provide an opportunity for India to increase its share in global exports, at a time when major economies are following a more restrictive approach.

Sputnik: Has the 'Make in India' been a successful initiative? Has it lived up to your expectations? Do you see any fault lines in this scheme?

Amitabh Kant: The success of the 'Make in India' initiative launched on September 25, 2014, has been unprecedented.

Across sectors, new investments, joint ventures, and partnerships are coming to light.

© AFP 2021 / AMIR QURESHI
Gwadar to Become the Next Dubai, Vital for CPEC, Investment Company Says
For example, Samsung is opening the world's largest mobile factory in Noida, nearly doubling its current capacity for mobile phone manufacturing. Bosch has begun the implementation of smart manufacturing at its centers in India. Notably, the automotive sector has become one of the beacons of 'Make in India' as the country is the 4th largest market for automobiles.

India produced 25 million vehicles in 2016-2017 out of which 3.47 million were exported. Other sectors too, such as biotechnology and generic pharmaceuticals, electronics, chemical, and petrochemical, have demonstrated significant achievements.

One area that can further benefit from partnerships and collaboration is research and development. Increased participation of the private sector, independently or through public-private partnerships, can catalyze India's innovative capabilities.

Sputnik: Defense is a major sector where the government has been trying to attract FDI. What are the problems that are keeping the defense sector from attaining their targets?

Amitabh Kant: Defense and aerospace is a strategic sector and has associated national security considerations. For the promotion of this sector, several policy measures and pro-industry steps have been taken in the last few years.

© AFP 2021 / SAUL LOEB
India’s Anti-Trust Watchdog Clears $16Bln Walmart-Flipkart Deal
100 percent FDI is allowed in the sector, through the government route, wherever it is likely to result in access to modern technology and up to 49 percent is allowed under an automatic route. A 'Make in India' portal for defense production (www.makeinindiadefence.com) has been launched that provides policy and procedural guidance for the defense industry.

The Defense Procurement Procedure (DPP) 2016 was promulgated that introduced a 'Buy Indian Designed Developed and Manufacturing' category as the default option for capital acquisitions and force modernization. DPP 2016 also liberalized the offsets regime, which provided a number of industry-friendly provisions, and amended processes to make the acquisition cycle shorter. The strategic partnership (SP) model introduced in the DPP 2016 will create long-term strategic partnerships between Indian entities and global original equipment manufacturers (OEMs) for manufacturing in the defense and aerospace sector.

Additionally, to spur manufacturing by leveraging existing industrial capability, two defense industrial corridors, one across Tamil Nadu, and the other across Uttar Pradesh (UP) have been approved.

In the defense and aerospace sector, international cooperation has been growing rapidly. Several intergovernmental joint working groups have been created that are in discussions on partnering for a host of technology induction initiatives ranging from aircraft carrier technology, unmanned vehicles to surveillance platforms. The schemes and initiatives launched by the government have already tasted success with several global players who are maintaining a very positive outlook for India.

© Wikipedia / Ville Miettinen
India Welcomes US Decision to Upgrade Bilateral Trade Relations
Sputnik: The status of employment has been attracting a lot of bad press. What is the real status?

Amitabh Kant: Over the years, with technological progress and innovation, new businesses have emerged globally, and in India, too, that are driving economies into the next stage of growth and development. These businesses have created new models of employment opportunities that give service providers an inherent flexibility to offer services at his or her convenience. The employment opportunities generated through these models are not adequately captured in the traditional data sets measuring the status of employment.

The understatement is further illustrated from a recent study by Ghosh & Ghosh, which concluded that seven million formal jobs were added in the Indian economy between March 2017 and 2018. Additionally, McKinsey's study on India's labor market revealed that increased government spending, the rise of independent work and entrepreneurship have boosted gainful employment of 20-26 million people.

Current data sets and their methodologies need to be refreshed so that the extent of economic activity arising from the digital, shared, and entrepreneurial work gets reflected in official statistics.

READ MORE: Pushing Products From US Not to Have Chinese Goods Replaced by Indian — Prof

Sputnik: How prepared is India to bring in robots and artificial intelligence in various sectors? Do you think this is going to add to the existing unemployment, and what remedies have been devised to tackle the situation?

Recognizing AI's potential to transform economies and the need for India to strategize its approach, the finance minister, in his budget speech for 2018 — 2019, mandated NITI Aayog to establish a national program on AI.

While the impact of AI on jobs is undeniable, history serves as evidence that the new technology and innovative processes create new jobs in the economy.

Moreover, job creation in new areas, such as data annotation, needs to be promoted. The new types of jobs arising from AI and robotics would have the potential to absorb a large portion of the workforce that may be impacted because of increasing automation.

Sputnik: Do you think irregularities committed by certain banks dented the business environment in India? What should be the solution to stop these kinds of frauds in banks?

© Sputnik / Maksim Blinov
India to Save $1.4 Billion Under Renegotiated LNG Deal With Gazprom – Minister
Amitabh Kant: Certain cases of banking irregularities cannot be generalized to paint an image of the Indian banking sector as a whole.

Strict measures have already been taken up to prevent situations like these to arise again. In the future, some additional checks and balances can be instituted to prevent any irregularities. These include strong underwriting norms, effective corporate governance standards, and ethics code.

The state of the Indian economy is strong because of its robust fundamentals. The slowdown in the banking sector and the rise of NPAs are turning around. Overall, business volumes are on a rise and flow of credit in the economy is increasing. Since 2016, cases, where loan defaults have taken place, are being resolved through the Insolvency and Bankruptcy Code, which has proved to a very effective.

Credit is a crucial instrument for the growth of businesses. Firms seeking credit will naturally pose risk from both external and internal factors. But, this risk also has its concomitant reward. The lending norms in the Indian banking sector have been prudent. It is evident from the fact that while the global economy in 2007-08 faced a banking crisis of an unprecedented magnitude, the Indian banking sector remained quite resilient.