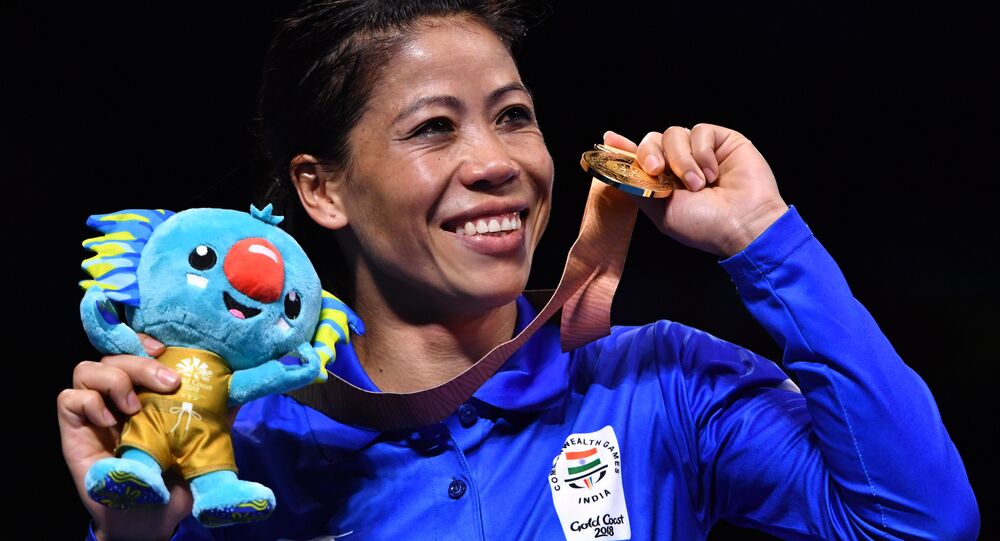 Boxer Mary Kom, who clinched the gold medal in the recent Commonwealth Games to complement her five-time world championship record, says she is extremely satisfied with her performance but the best is yet to come. She spoke to Sputnik on how she has been training in pursuit of the Olympic gold.

New Delhi (Sputnik) — Born and brought up in Kangathei in India's northeastern state of Manipur, Mary Kom's original name is Mangte Chungneijang, which means "prosperous" in her local dialect. Her journey from small town life to being an ace boxer was fraught with struggle, as her conservative family was against her sports ambitions. Yet she waded through the murky waters to become the only boxer to win a medal in every one of five world championships. In her Commonwealth Games debut in Gold Coast, Australia, she made Indians proud once again by clinching the gold, thrashing Northern Ireland's 21-year-old Kristina O'Hara in a unanimous point's decision in the finals of the women's 48kg boxing category.

In an exclusive interview with Sputnik, Mary Kom spoke on what inspires her to perform better and how she balances work with family.

Sputnik: Whenever you are in the boxing ring, India's expectations are high. How do you cope with the stress that comes with expectations?

© RIA Novosti . A. Solomonov
Olive Branch: Indian Boxer Offers to Return Prize to Beaten Chinese Rival
Mary Kom: Yes there is a lot of pressure on me to perform. Every time and in every championship Indians expect a medal from me. But when you carry the pressure it will have a negative impact on your performance, so I play with a relaxed mind and the results are always good.  This time too, I followed the same approach and won the gold for my country.

Mary Kom: Now my aim is to win a gold medal in the Olympic Games. It's my dream. I will not be truly happy unless I win the gold in the Olympics. I am preparing hard for it. I may win or I may not, but it's my earnest desire to give my best in the upcoming games.

© AP Photo / The Herald-Leader, Charles Bertram
Oops! Indian Sports Minister of Kerala Trolled for Calling Muhammad Ali ‘Pride of Kerala’
Sputnik: You have a family. You are a Member of Parliament and you also run a sports academy. How do you manage so many things?

Mary Kom: Yes it's very difficult but I systematically manage these all. For my academy, I rely on some of my trusted people.

Sputnik: You have three children. How do you manage to spend quality time with them? Do they become upset when you are not around?

Mary Kom: Yes, sometimes they become upset and annoyed as I do not give them sufficient time and in turn, I become upset. Just now I called my children and talked to them through video calling.

Sputnik: You are a role model for many Indian sportspersons. But who is your idol?

Mary Kom: I was inspired a lot by Mohammad Ali during the early days of my career. Now I get inspiration from all those who are making India proud. It gives me inner strength to do better and better. I was very much impressed by the performance of girls in the Commonwealth Games.

Sputnik: How do you remain fit despite your busy schedule?

Mary Kom: I have a regular and strict fitness regime. Fitness should be the topmost priority in any sportsperson's life. Now I am training hard for the upcoming Asian games. Hoping for gold!