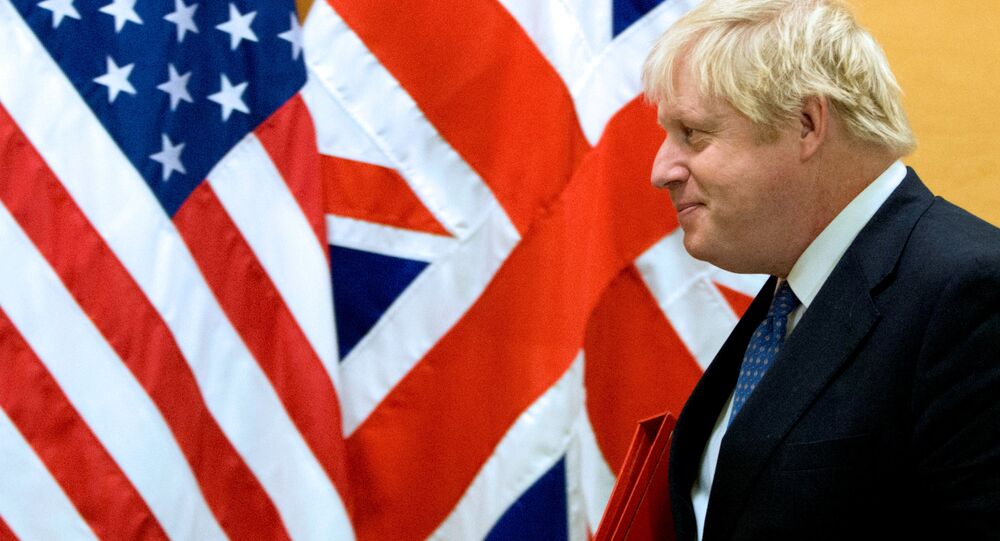 Setting out his vision for foreign policy post-Brexit, the UK Foreign Secretary said the UK should quit "sulking" over its "mistake"-heavy recent history of foreign entanglements, making the case for greater interventionism. Johnson's proposals are bound to be controversial, and are likely unworkable, an academic told Sputnik.

In a December 7 speech — The struggle against Islamist terror: How global Britain is helping to win — Boris Johnson said the country should not be deterred from future intervention in the Middle East by its controversial experiences in Afghanistan, Iraq and Libya, and be "part of the solution" for the troubled region, in particular countries such as Syria and Yemen.

British foreign policy is not the problem; it is part of the solution. Together with our international partners we can defeat terrorism https://t.co/eKtvevWnXv pic.twitter.com/wQAWZArLY5

He also challenged the notion the years of bloody strife and emergence of Daesh were the products of Western intervention, arguing it was time for the UK to "collectively re-insert" itself into the nearly-resolved Syrian crisis, bemoaning how the country's failure to intervene in 2013 left the "pitch wide open" for Russia and Iran.

Dr. May Darwich, Assistant Professor of International Relations at the Middle East in the School of Government and International Affairs, was extremely skeptical of the Foreign Secretary's oratory.

Sputnik: What do you make of Johnson's comments?

May Darwich: His comments were quite contentious in many ways, and give an indication of how the UK's foreign policy might look in future, but it's definitely not a set-in-stone policy proposal.

Sputnik: How do you see the situation in the Middle East developing as a result?

Dr. May Darwich: The situation is not getting any better, and these pronouncements could increase the negative image of the UK and US in the region — the last few interventions haven't been successful in any way, leading to further instability, radicalism and sectarianism. These episodes do not evoke good memories for people living in the Middle East.

Sputnik: Have we heard this kind of thing before?

There's definitely a link between Johnson's speech and Donald Trump's recent recognition of Jerusalem as the capital of Israel, for instance.

© AP Photo / Thierry Charlier
British Foreign Secretary Boris Johnson, left and Britain's Prime Minister Theresa May arrive for a meeting during the NATO summit of heads of state and government, at the NATO headquarters, in Brussels on Thursday, May 25, 2017.

Sputnik: Do you think the EU served as a restraining factor on UK foreign policy?

Dr. May Darwich: Johnson is giving a statement that contradicts the general Brexit discourse, which is all about focusing on domestic issues not international ones. Interventionism on the UK's part necessitates the allocation of lots of resources overseas. We can't think of the EU as a restraining factor on the UK, as the EU has primarily focused on economic and social policies — when it comes to defense, the EU has maintained quite an independent stance.

Sputnik: Boris Johnson suggested Western intervention had reduced the Islamist threat. Is there any truth to this?

No, not at all — I completely disagree. Looking back at the Iraq intervention, the instability that plagued the country afterwards is the most obvious evidence contradicting that claim.

Dr. May Darwich: Although, I'm not sure these statements will provoke international reactions, until actual policies are put forward, or Johnson is successful in building consensus around his vision.

Sputnik: Will the UK economy benefit from more interventionism?

Dr. May Darwich: All kinds of intervention Johnson advocated would require major resources being committed and I'm not sure the Foreign Secretary would be able to mobilize people behind such policies — although military interventionism is already ongoing. I don't see UK withdrawal from Iraq and Afghanistan any time soon.

Intensifying that approach would be dangerous and extremely costly in the Middle East and at a domestic level.