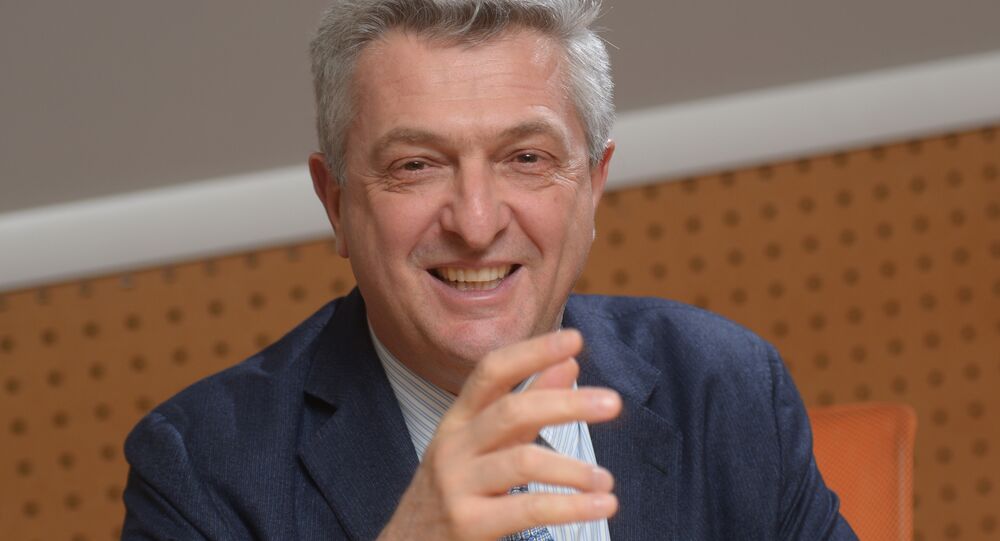 According to Grandi, he discussed during the meetings with Lavrov the global compact on refugees, reaffirming the necessity of international solidarity for refugees. The UN document is expected to be established by 2018.

"We also spoke not just with Minister Lavrov, because I also met Minister Puchkov and also First Deputy Interior Minister Gorovoi about the refugees in Russia. Russia is a country that hosts many refugees. For us this is very important," Grandi said.

He added that the parties had very important discussions on the issues of refugees.

"We really have a lot of experience working with the Russian Federation and we want to continuously make sure that we do the best together," Grandi said.

Grandi stressed before leaving Russia that he was very encouraged by conversations held during his visit.

© Sputnik / Igor Maslov
Putin Recognizes Passports of Donetsk, Lugansk Republics 'for Humanitarian Reasons'
Eastern Ukraine has been affected by the conflict between Kiev authorities and Donbass independence supporters since 2014. According to the UN High Commissioner for Human Rights' Office, at least 10,000 civilians and servicemen have been killed during the conflict.

Grandi stressed the need to urge the de-facto authorities of Donbass region to allow humanitarian agencies carry out their activities and provide aid to people.

"Russia is doing already work there [in Ukraine] distributing supplies, but I think more is needed and we do good work, we do shelter work … but we need that space [to do our work] and we hope that anybody who has influence over the de-facto authorities should exercise that influence and that it will continue to be done," Grandi said.

The UN High Commissioner for Refugees called on the parties to the Ukrainian conflict and countries being part of the Minsk agreements to intensify political efforts to bring the conflict to an end.

"What we really need is to pass messages to the de-facto authorities that they should understand that the humanitarian assistance is not a security risk. It increases the security of the people," Grandi added.

The new Round of intra-Syrian talks kicked of in Geneva on Thursday under auspices of UN Special Envoy for Syria Staffan de Mistura.

"I hope that this effort finally will allow everybody to rally behind an agreement that is accepted by everybody because there [are] different parties and it is very hard to find unity," Grandi said.

He stressed that solving of the humanitarian issue is a duty of the parties to the Syrian conflict.

"Let’s really make sure that these [Geneva] peace talks… succeed. We cannot have the seventh year of war," Grandi added.

Grandi highlighted the parties participating in Geneva should finally reach agreement on free passage of the humanitarian convoys without risk of attacks and threat to life of humanitarian staff.

"They should agree that this continues not just for one week or two," Grandi added.

Grandi stressed that humanitarian convoys should be protected by and condemned all attacks on all aid convoys including the one that happened on Monday.

On Monday, the delivery of UN humanitarian aid to the region of al-Waer in Syrian Homs was derailed by an attack of militants on the convoy. As a result of the attack civilians and servicemen of the Syrian government army were killed and wounded and part of the humanitarian supplies was stolen.

"I think it is better to concentrate on making this [peace] agreement. Because that is what creates the safety, when people stop fighting. I think it is the peace agreement that will create the safety," Grandi said.

He expressed doubt regarding possibility of creation absolutely safe zones in Syria amid extremely complicated situation in the country with many different groups fighting with each other.

Grandi stressed that reaching the agreement between the parties to the Syrian conflict will make return of refugees back to the country possible.

"That type [peace] of agreement if it is solid, if it is durable will allow many people to go back. I am sure that many people will want to go back especially from the neighboring countries. We have to respect their right to go back whenever they want and I think that everybody agrees on that," Grandi added.

According to Grandi, the establishment of peace in Syria will provide solution for long term refugees crisis.

He added that a large number of Syrian have been accepted by Jordan, and that UNHCR have registered almost 700,000 Syrian refugees there.

"So I think that we need to understand that this is a small country in the middle of many different conflicts. They need a lot of support and help from everybody. This is my message," Grandi said.

The UN High Commissioner for Refugees added that it would be great if Russia could also provide help to Jordan regarding refugees.

The mandatory scheme introduced by the European Union is aimed at relocating some 160,000 refugees currently held in Greece and Italy throughout the bloc with migrant quotas established for each country. However, only 11,966 people have been relocated so far with monthly targets of 1,000 relocation from Italy and 2,000 from Greece.

"The relocation from Italy and Greece needs to be accelerated … We support fully the decision that they [EU] made in 2015. And we are not happy with the fact that out of 160,000 refugees maybe less than 10,000 were relocated," Grandi said.

Grandi stressed that example of Germany that has taken the largest amount of migrants should be followed and migrant quotas should be accepted by all EU member-states.

"It is clear that the lessons that we have learned in 2015 and 2016 indicate that it is not a viable model anymore. It was maybe viable when the numbers of migrants were small, but now I think that you need to have a more equitable principle, otherwise it will be only the countries in the border areas that will receive the refugees and the others will not," Grandi added.