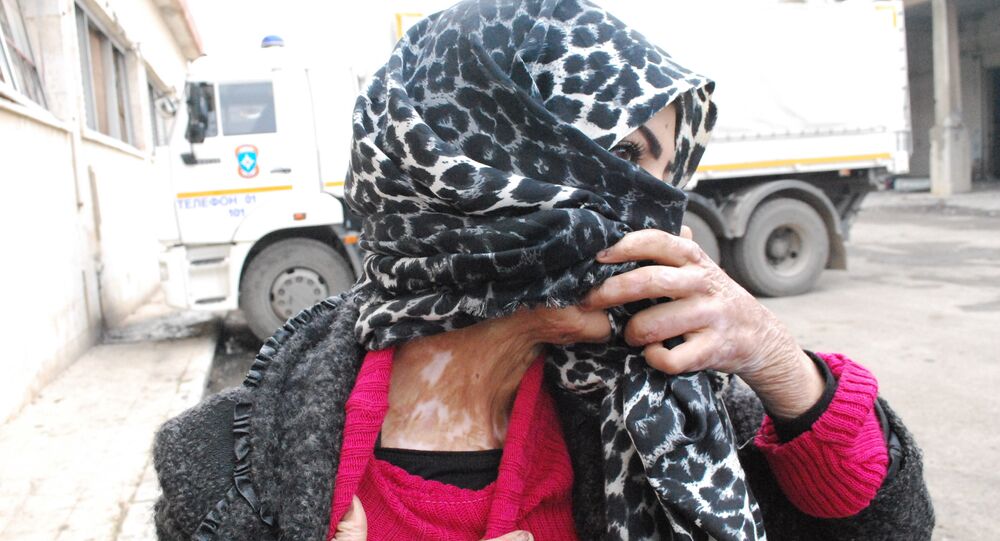 A resident of eastern Aleppo spoke with Sputnik Arabic sharing her horrifying ordeal of living in the city during the terrorist’s reign.

Covering her face with a handkerchief the young woman said that the terrorists made her and other women’s life a living hell. Horrifying abuse such as rape, forced marriage, murder and stoning to death were a part of life under the terrorist’s control.

“If a woman was going to marry a man who did not belong to a terrorist organization, she was beaten, put in a pit or prison, she could get stoned in a public square or executed by beheading.”

© AFP 2020 / KARAM AL-MASRI
'It's Shame and Disgrace' to Claim Aleppo Has Fallen Instead of Hailing Its Liberation
She further said that if a person was accused of some crime, he or she was taken to top floor of a building on the square where seven-storey building is situated and was thrown off of it. If the person survived, then he or she was thrown off again until they died.

“We could not live like ordinary people living a normal life. Women were not allowed to work in order to feed their families, there was a complete ban on that,” the woman told Sputnik Arabic.

Further talking about the terrors that women faced at the hands of the terrorists, the woman said that if some militant wanted a girl he would arrange for a Muslim wedding, called nikkah. After that he could do whatever he liked with his new bride.

Quite often just after a couple of hours the militant would leave the girl or kick her out.

“Two of my friends were affected like that. With one friend the terrorist spent just half an hour, then he kicked her out and she became pregnant. A child was born, whose father is some kind of a militant. Everyone knows where the child came from, but she cannot work to feed the child so how can she live then?” she said.

Coming back to her own story, the woman said that she and her mother were put in a pit for no reason.

“We were living, working, eating and were thrown into custody. There is no law amongst the militants. We were intimidated. A car full of militants would drive in the streets and one of them would be holding a woman’s head by her hair. They would do that to intimidate people.”

© Sputnik / Mikhail Alaeddin
Fake Photo-Op: Staged Aleppo Disaster Videos Share 'One and the Same Scenario'
Talking about the horrors she had to endure in her personal life, the woman said, “My husband was killed, he was shot in the head. His body was taken to Turkey where they pulled out all of his organs and returned the body to me. It lay rolled up in a bag because there was nothing left to it. The body was sewn up like a sack.”

She further said that the militants took her son as they said he belonged to them and not to the mother. The last time she saw her own son was two years ago. Her sister’s son was also taken.

“They have no heart, no compassion for women. They refused to treat us medically. A gas tank exploded in my house and I was burnt. I went to the doctor and he said he could not examine me, it is a sin. How is it a sin? God created humans what is shameful about that?”

The woman spoke about her injuries during the gas explosion and how her burns were left untreated. “Look at my hands and my whole body is covered in burns because they were healing without treatment. My hands look like this because of terrorism. I'm 21, I hope to live and raise a family but I am so disfigured. Sorry, I have no words,” concluded the woman.

On Monday, the UN Security Council adopted a draft resolution on monitoring evacuations in Aleppo after extensive consultations conducted the day before. The resolution in based on the French and Russian proposals regarding best ways to implement and monitor evacuations on the ground.

Thursday May Be Crucial for Evacuation From E Aleppo - De Mistura