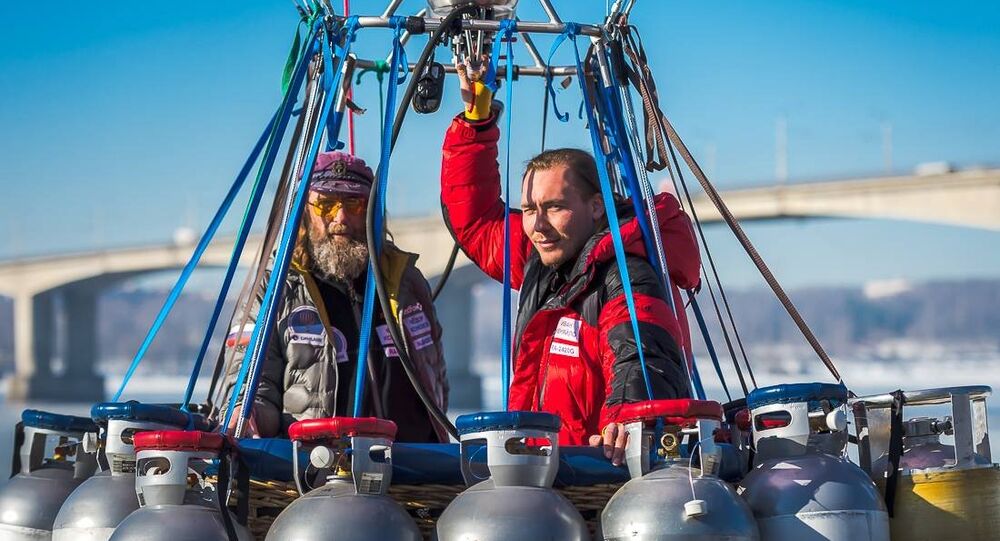 Russian adventurer Fedor Konyukhov, who broke the world record for the fastest solo journey around the world in a hot air balloon, taking just 11 days, described some of the highlights of his fascinating trip in an interview with Sputnik.

MOSCOW (Sputnik), Anastasia Levchenko — The prominent adventurer told a Sputnik correspondent that all of the Boeing planes he encountered had moved out of his way. He praised the assistance he received from over a dozen states and also shared his thoughts on some of the events taking place around the globe while he was high above the ground.

All the Boeings Moved Aside to Make Way for Me!

The Russian adventurer told Sputnik that Boeing planes were making way for him during his journey.

"All the Boeings moved aside to make way for me! It came about that I passed right above the international airports Santiago and Sidney. I did not expect that, I thought I would pass somewhat closer to Tasmania… But it happened so. And the traffic is huge above those airports," Konyukhov said.

© Photo : fedorkonyukhov/instagram
Around the World in 11 Days! Russian Traveller Sets New Record for Solo Balloon Trip
He added that workers at those airports who communicated with him while he was in the air all greeted him and knew his name.

During his flight, Konyukhov broke four world records simultaneously: he became the first person to fly solo around the world on his first attempt, as well as beating the speed, distance and height records.

"I saw the balloon for the first time just before the flight itself. I thought: what a jumbo! But I understood, I need to fly," Konyukhov said.

The adventurer covered a distance of 35,000 kilometers (almost 22,000 miles) and managed to rise to the height of at least 11,200 meters (almost 7 miles). The lowest temperature that he experienced was around —56 degrees Celsius (-68.8 Fahrenheit).

© Photo : Facebook/Fyodor Konyukhov
'We Feared We'd Crash': Russian Balloonist Reveals Secrets of Record Flight
Konyukhov did not eat or sleep at all during the 11-day flight. He invented his own form of napping, sleeping for just one or two seconds every few hours while holding a key, so that the sound of it slipping from his fingers onto a plate on the floor would wake him up almost immediately after he'd dozed off.

He could not eat, as all the food froze when the heater broke. He only managed to consume some biscuits through the mask on his face.

"I took a music player with me to listen to Vika Tsyganova and Vysotsky [Russian singers]. But it didn’t play because of the low temperatures," Konyukhov recalls.

Konyukhov is not only an adventurer, but also an orthodox priest. He took an icon of the Holy Virgin with him and a cross with 46 relics.

"I always believed that I wouldn’t drop into the ocean because I had so many holy relics with me, they could not be wasted… That is what helped me," Konyukhov said.

World Record Result of Cooperation Among a Dozen States

© Sputnik / Evgeniy Biyatov
An Expensive Journey: St.Petersburg Resident Travels to Magadan in $3.5k Taxi
Konyukhov, who returned home to Moscow on Monday, said that breaking the world record previously set by US adventurer Steve Fossett for the fastest circumnavigation of the earth in a hot air balloon boiled down to the combined efforts of people from a wide array of countries.

"More than 12 countries worked together. The fabric for the balloon was produced in Spain, the balloon itself was constructed in the United Kingdom, the autopilot was made in the Netherlands, its cooper came from Belgium, the balloon was inflated by an American team, the burners were Italian. When I started, I practiced and asked for [flight] permission in Australia. New Zealand, Chile, Argentina, Uruguay, Brazil and South Africa all gave me a flight permit," Konyukhov said.

Konyukhov decided to devote his flight to the American adventurer whose record he broke. "Steve Fossett is a legendary person for me," he says.

His trip started in Australia and then continued above New Zealand, the Pacific Ocean, South America and the Southern Ocean.

The adventurer said that at the beginning he was worried about the possibility of negative treatment from the Australians due to their "somewhat anti-Russian position," but in the end they were friendly to him.

"All those states treated me well, and by doing so they treated my country well too. I am grateful to them for that," Konyukhov said.

We Should Keep Our Small Planet Safe

Fedor Konyukhov admitted to the Sputnik reporter that he felt scared and disappointed by the aggression and violent attacks that happen on Earth after having seen the beauty of the planet from his hot air balloon.

"During the flight, I saw our planet from a different angle. I felt an urgent need to protect it and take care of it. I felt scared and bitter when I heard on the TV about all of those explosions and terrorist attacks. I asked myself: what are people doing? We should keep our small planet safe," Konyukhov said.

Konyukhov’s journey lasted from July 12 until July 23. During this period, a mass murder in Nice, France, claimed the lives of over 80 people and shocked the world.

"When I saw the planet from the height of my air balloon, I thought about how beautiful it is. I saw it before from the height of Everest and from both North and South poles, but this time the beauty I saw was more complete. That is why my next dream is to rise to the stratosphere," Konyukhov enthused.

The prominent adventurer also decried the position adopted by Russian athletes as "not proud enough" with regard to their participation in the Rio Olympics.

© Sputnik / Pavel Lisitsyn
WADA Made Many Mistakes Regarding Doping Abuse in Russia - German Olympic Committee
Following a report by an independent World Anti-Doping Agency (WADA) commission led by Canadian law professor Richard McLaren in which Russia was accused of having run a state-sponsored doping program, the International Olympic Committee (IOC) announced its decision to ban all Russian athletes with a record of prior doping violations from participating in the 2016 Rio Olympic Games. However, the IOC left it up to the respective international federations to decide whether individual Russian athletes should be allowed to compete in the Games.

The IOC Executive Board has appointed a three-member panel to make a final decision on whether Russian athletes should be permitted to participate in the 2016 Olympics. Thus, it will only become clear whether certain Russian athletes will be allowed to participate just before the very start of the Games on August 6. The athletes, meanwhile, continue to prepare for the competition.

"I do not like this whole situation with the Russian athletes. They humble themselves too much by asking and persuading to be allowed [to participate]. For what? Even if they are allowed to participate in the end, they have already been absolutely beaten morally, and they couldn’t have prepared properly. They will certainly lose, and in that case everyone will only start seeing it as proof of their previous doping. Because before they were always the winners," Konyukhov said.

"I think they should take a prouder stance. Our country is great, and there is no need for us to humble ourselves," he added.

Fedor Konyukhov, 64, is also the author of 17 books. The adventurer has already climbed Mount Everest twice and traveled to the North and South poles. He now dreams of descending to Mariana Trench and Tonga Trench — the deepest parts of the world's oceans. He believes he might see enormous, ancient creatures there.

This Guinness Record-Holding Dog is a Balloon Popping Machine