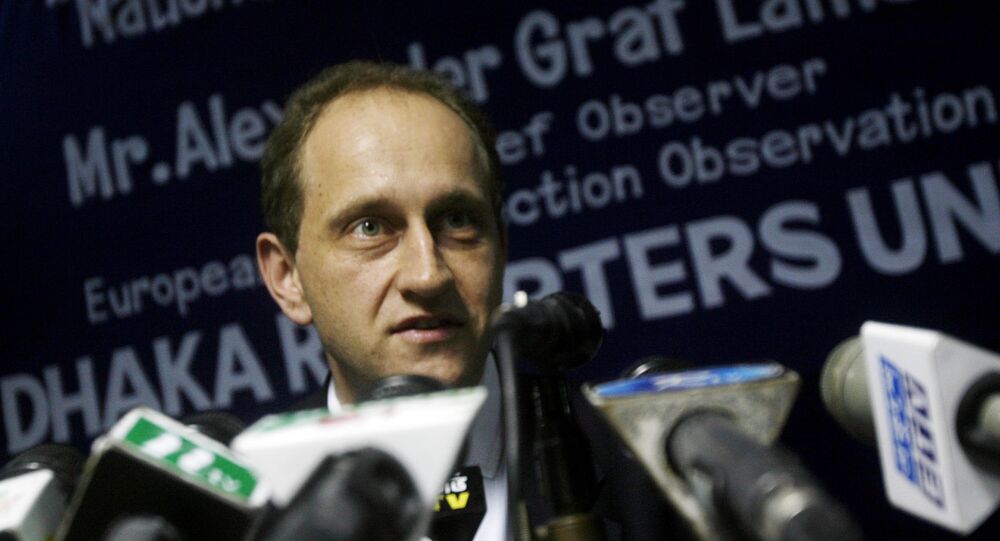 Russia must make changes, both in its reception of the EU and concerning its actions in Ukraine, said Alexander Graf Lambsdorff, Vice-President of the European Parliament.

© Sputnik / Vladimir Fedorenko
PACE Deprives Russia of Voting Rights Until April, Russian Delegation Suspends Membership for One Year
Do you think that the suspension of the Russian Delegation to the Parliamentary Assembly of the Council of Europe and possible new sanctions may be the beginning of a general breakdown between Russia and Europe? Could relations worsen?

Alexander Graf Lambsdorff: The mission of the Strasbourg-based Council is to uphold human rights, democracy and the rule of law across the continent. Therefore, this decision has symbolic value and shows that in the eyes of nearly everyone in Europe, Russia has not lived up to the standards she has committed herself to in these areas. However, I do not believe that a permanent break is a necessary outcome. Russia is called upon to show some good will, and the West needs to stand ready to engage in dialogue with Moscow. Personally, I am ready to do so.

Is there any chance to save the partnership between Russia and Europe? If yes, on what grounds? If no, do you see it as a start of a 'new Cold War'?

Alexander Graf Lambsdorff: Just last week, the EU ambassador to the Russian Federation praised the accessibility of Russian officials to receive EU representatives and Foreign Ministers to maintain dialogue. That sounds like partnership. At the same time, however, two members of the European Parliament were denied entry into Russia, which sends a very negative signal. We hope that this does not happen again. If we want a real partnership, it will have to be developed through dialogue and built on a commitment to peace in Europe, respect for international law and the observance of the fundamental rights and liberties of all citizens. Business relations are important, too, but they cannot replace the joint commitment to peace, security and liberty.

© REUTERS / Robert Pratta
Marine Le Pen Re-Elected as French National Front Leader With 100% of Votes
How do you see the rise of euroskeptical and far-right forces in the EP and beyond? Is it possible to stop this trend in the foreseeable future?

Alexander Graf Lambsdorff: Although the far-right gained many votes in the last European elections, in the end it did not manage to form a joint political group in the Parliament. They simply cannot work together on an international level. Many of them are fascists — politically, they are nationalists, and economically, socialist. At the same time, they hate minorities and people from other countries. We all know where racist National Socialism led Europe in the 1930s and 40s. That is a dangerous combination that will only be stopped through successful policies by the EU and her Member States regarding economic growth, social cohesion and cultural integration of minorities.

What is your opinion on the tight contacts between some of those parties with their Russian vis-à-vis? Does it affect the image of Russia in Europe?

Alexander Graf Lambsdorff: Russia’s glory stems in part from her victory over the fascists in World War II. So no one in Russia should support them today. We have seen reports about a credit to the National Front of Marine Le Pen and the presence of some right-wingers as so-called "election observers" in Crimea.

© AFP 2020 / STRINGER
American Soldiers Caught on Tape in Mariupol? (VIDEO)
Do you think, after last week's escalation, it is possible to resolve the Ukrainian crisis? Or, should both sides (Europe and Russia) prepare for decades of a ‘frozen conflict’ with occasional outbreaks like the one in Mariupol?

Alexander Graf Lambsdorff: Russia is a great nation, a rich country with a wonderful culture and warmhearted people. Germany and Russia are tied geographically and historically, and we all cherish the deep historical links between our two nations. Therefore, it should make you think when even the German government said that the Russian activities in Eastern Ukraine are unacceptable. I hope that Russia will cease her activities there and return to the idea of a common concept of security for all European nations based on sovereignty and international law as well as the respect for the inviolability of all nations’ borders. I grew up during the Cold War and I certainly do not want to go back to that time.

Russia Sees Hope That Sanctions Could Be Gone by Summer 2015