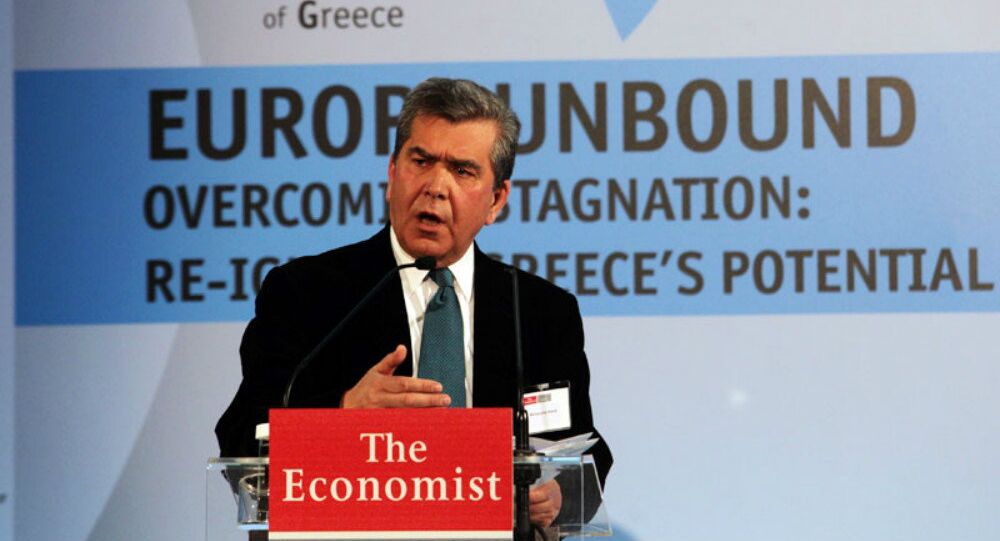 In an interview for the Russian news agency RIA Novosti in Athens on Wednesday, SYRIZA (Coalition of the Radical Left) MP Alexis Mitropoulos discussed the changes that would take place within Greece, and in its policy in relation to the European Union and toward Russia, should his coalition win Sunday's elections.

Mr. Mitropoulos, one of the major themes in European media at present is Greece's possible exit from the Eurozone in the event that SYRIZA wins the upcoming elections. Could you clarify your party's position on the issue?

Alexis Mitropoulos: A growing number of Europeans, anticipating SYRIZA's victory on Sunday, have begun to acknowledge that there is no procedure for withdrawing from the Eurozone, and stating that they will be willing to discuss the requirements made by the new Greek government. Many even discuss the need to change the policy of austerity, and the issue of debt resolution, at the European Debt Conference, and this applies not only to Greece; accordingly, a new agreement on debts may be reached, similar to the London Debts Agreement of 1953 with Germany.

No one can afford the separation of the country from the currency union, which is a fact that demonstrates that the euro is vulnerable and weak. [German Chancellor Angela] Merkel herself has admitted that if any country were to leave the single monetary union, the Eurozone as a whole may be begin a process of disintegration. And as prominent German economists and authoritative think tanks note, "Germany will never agree to kill the goose that lays the golden eggs."

SYRIZA looks to begin a new series of talks on Greek debt. Party representatives say that they do not exclude the possibility of unilateral action, and that Greece's leverage in this case would be the suspension of payments. What is your position?

A new agreement should include, firstly, the cancelation of much of the par value of the debt in order to make it viable. Secondly, a 'condition of development' is necessary for the repayment of the balance of the debt in such a way as to be served at the expense of economic growth, rather than on the budget surplus, which at the moment is achieved via the brutal and destructive policy of austerity. Thirdly, there needs to be a "a favored period", that is, a moratorium on debt servicing, given in order to receive sources for development. We have every reason to believe that the official European policy will change, and that European institutions have all the institutional and economic interests in order to prevent even temporary turmoil in what is already a deteriorating economic situation, given that almost all the countries of the EU are entering a period of economic recession and deflation.

What will happen to the plans to privatize the Piraeus and Thessaloniki seaports, along with railways, airports and the Greek gas company DESFA? Will the results of privatization be annulled?

Alexis Mitropoulos: The Memorandum [which prevents Greece from pursuing an independent policy] has lowered valuations, devalued and shattered the state structure. The most important facilities of the country's tangible and intangible national wealth, which work in the interests of society, are being dismantled through liquidation proceedings at the market's behest.

This was done in order to collect a specific amount of money for the payment of the debt, but because of the rapid depreciation of the value of public property, the expected sums were never collected. The result of this decay is that the Greek state is moving rapidly toward the category of failed states that cannot serve even basic social and national needs.

This course needs to be changed, and there needs to be a process of the quick recovery of the elements of the foundations of the state. No state in the era of neoliberal globalization can survive and preserve its national and cultural identity, to meet the needs of its citizens, if it becomes the victim of nomadic capital.

You in Russia have experienced the process of the liquidation of the foundations of the state –the period of Yeltsin, and its reconstruction –the period of Putin, and as a result your great country is once again beginning to play its historical role. A SYRIZA government would undertake the same process of reconstruction [in Greece] to restore state and public control over all the elements necessary to the functioning of the state.

The Hellenic Republic Asset Development Fund HRADF, an institutional and national disgrace, created in the spirit of Treuhand [an agency in East Germany involved in the privatization of state assets] will be immediately liquidated, its assets transferred back to the public sector, from which they had been withdrawn overnight. All the contracts on the sale of public wealth will be checked in terms of legality and expediency.

Have you set the goal of nationalizing the banking sector?

Alexis Mitropoulos: In any case, the four so-called system-forming banks conducted a recapitalization using the Greek people's money in the amount of 40 billion euros, which came to count toward the national debt! The majority of the shares belong to the Hellenic Fund, in other words to the government.

All that is left for the main shareholder to do is to exercise its rights to directly or indirectly take control in order to facilitate the new government's implementation of an emergency program aimed at addressing the humanitarian crisis, getting people back to work, kickstarting the economy and assisting individual and legal entities "in the red," and developing in the medium and long-term a program for economic recovery.

What changes would you like to see in domestic politics? Which reforms would you keep, and which would you scrap?

Alexis Mitropoulos: We want to build a service state which is transparent, effective, taking personal responsibility for all the business which has been entrusted to it. We will improve anti-bureaucratic measures, using computerization and the introduction of e-government measures in each government department. We will fight for opacity, against bribery and corruption, since the main unique element of the Greek government lies in the fact that in the course of the last years it has been held hostage by big private interests.

People will pay their taxes in accordance with their actual potential. People in low-paid jobs, pensioners with small pensions and people with low wages will benefit from a higher tax-free threshold. The ENFIA uniform property tax, which became effective in the confiscation of property, will be repealed and replaced by a fair tax on large properties with a high, non-taxable threshold.

But the biggest change will be in the reorganization of the state and a revision of the constitution within the national assembly. We will strengthen the role of the parliament in relation to the executive. [New] institutions of representative democracy will be created, with local, regional and republic-wide referendums, which will have the power to change or cancel earlier adopted laws.

We will [aim to] protect the public good, public spaces, community-service agencies from future attack. The separation of the three levels of government and the exclusive rights of politicians will be strengthened.

SYRIZA wants to increase the minimum wage from less than 600 to 751 euros. Where will you get the money?

Alexis Mitropoulos: The establishment of a minimum wage of 751 euros, which will be carried out in conjunction with the private sector via collective bargaining, arbitration, and so on, will allow, as research has already demonstrated, to reach significant growth via the growth of domestic demand and the creation of thousands of jobs.

The vast majority of employers' organizations, especially small and medium-sized businesses, never demanded the abolition of the minimum wage. It was a requirement put forth by the troika of creditors, several large department stores and equipment manufacturers, and banks. Therefore, the implications for the Greek economy will be favorable.

Premier Samaras now guarantees the recovery of pensions for ethnic Greeks from the former USSR and Northern Epirus. The "New Democracy" party had abolished the pensions in 2012. What is SYRIZA's position on this issue?

Alexis Mitropoulos: These are pre-election promises made by those who canceled the pensions two years ago. Of course we will return the pensions to our older compatriots; the homeland must take care to ensure that they have a dignified old age. Optimistically-minded or desperate conditions for veterans of labor reflect the favorable or unfavorable future of the economy and of the country as a whole.

In the case of the formation of a SYRIZA government, will Greece continue to support the policy of sanctions against Russia? What are the prospects for Greek-Russian relations?

Alexis Mitropoulos: We are going to demand the lifting of sanctions against our traditional friend Russia, with whom we share the same religion. With the interests of Greek agricultural production first and foremost, we will cancel these destructive sanctions and support to end the unjust war by Europe against Russia over the present Ukrainian crisis.

The new Greece must rapidly improve its relations with Russia, and not only because of the close relations between our peoples, our cultural, religious or historical ties. In our perception, which in this case coincides with that of General [Charles] de Gaulle, "Europe must be united from the Atlantic to the Urals." And not only in the interests of establishing peace, democracy and humanistic culture, but also to eliminate the extremes of neoliberal globalism, to establish the primacy of democratic political institutions, of the people over the presently uncontrollable economy.